Dear Reader, we make this and other articles available for free online to serve those unable to afford or access the print edition of Monthly Review. If you read the magazine online and can afford a print subscription, we hope you will consider purchasing one. Please visit the MR store for subscription options. Thank you very much. —Eds.
Notes from the Editors
by The Editors
(Apr 01, 2021)
Topics: Health Inequality Marxism Socialism Places: Global 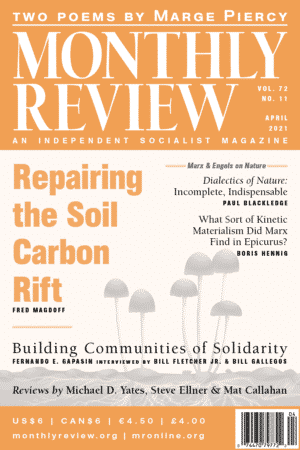 Paul Blackledge’s “Engels’s Ecologically Indispensable if Incomplete Dialectics of Nature” in this issue was written in commemoration of the bicentennial of Frederick Engels’s birth (see also the articles by John Bellamy Foster and Kaan Kangal in the November 2020 issue). Blackledge’s review is notable in addressing Engels’s dialectics in the context of the rediscovery of Engels as an ecological thinker.

The ecological character of Engels’s work is evident from his earliest writings. Further, Engels was a major contributor to the development of social epidemiology. The central thesis of his classic work on the Condition of the Working Class in England, written in 1844–45 while he was still in his early twenties, was that bourgeois society promoted what he called “social murder,” a concept he took from the literature of the Chartist movement. Examining the higher mortality, morbidity, disability, and disease in working-class districts, and the causes of this in the environmental and epidemiological conditions of the working class, Engels observed that when a ruling class knows “that…thousands of victims must perish” due to such dire conditions, “and yet permits these conditions to remain, its deed is murder just as surely as the deed of the single individual; disguised, malicious murder, murder against which none can defend himself, which does not seem what it is, because no man sees the murderer, because the death of the victim seems a natural one, since the offence is more one of omission than commission. But murder it remains.” Engels continued:

I have now to prove that society in England daily and hourly commits what the working-class organs, with perfect correctness, characterize as social murder, that it has placed the workers under conditions in which they can neither retain health nor live long; that it undermines the vital force of these workers gradually, little by little, and so hurries them to the grave before their time. I have further to prove that society knows how injurious such conditions are to the health and life of the workers, and yet does nothing to improve these conditions. That it knows the consequences of its deeds; that its act is, therefore, not mere manslaughter, but murder. (Karl Marx and Frederick Engels, Collected Works, vol. 4 [New York: International Publishers, 1975], 394)

A few pages later he wrote: “The bourgeoisie reads these things [for example the death of children as a result of the toxic environmental conditions imposed on the working class] every day in the newspapers and takes no further trouble. But it cannot complain if, after the official and non-official testimony here cited which must be known to it, I broadly accuse it of social murder” (Marx and Engels, Collected Works, vol. 4, 407). Engels detailed how cholera, typhus, typhoid fever, scarlet fever, tuberculosis, and other epidemic diseases were rife in working-class districts. He also described how the modern factory system forced pollution of air and water, unsanitary and inadequate housing, homelessness, poor nutrition, overwork, and unsafe and debilitating physiological conditions upon working-class individuals in these districts. He showed how infant mortality in working-class districts in Manchester was as high as 50 percent (something that later historians have confirmed) (Marx and Engels, Collected Works, vol. 4, 403–7, 532). The reaction of those in power to these conditions, Engels argued, was simply to close their eyes, so as not to see that which they knew existed, except when such conditions endangered their own health, as in the periodic cholera epidemics that spread from poor to rich areas.

To what extent is Engels’s concept of social murder applicable to present-day capitalist society? While it is not possible here to answer this question in a comprehensive way—the Encyclopedia of Social Murder Under Capitalism still has to be written—it is useful to examine a number of ways in which the current COVID-19 pandemic is related to social murder. SARS-CoV-2, along with a number of other viruses that have reached pandemic level in recent decades, has its origin and spread in the reality of capitalist globalization, and particularly global agribusiness, which is destroying wilderness and rural areas, compromising ecosystems and species. It creates industrial monocultures, particularly feedlots, that are vectors for the transmission of disease, along the circuits of capital. For these and other reasons, as the Harvard ecologist Richard Levins argued, capitalism itself can be seen as a disease.

At this writing, over half a million people have died of COVID-19 in the United States, while around 2.5 million people have died worldwide, in a year. That this is tied to social murder, traceable to the social relations of capitalist society, can easily be seen in the fact that in the United States, as of February 22, 2021, 1,542 people per million have died of COVID-19. In the remainder of the Group of Seven, death rates per million (as of February 21) were: United Kingdom, 1,773; Italy, 1,589; France, 1,294; Germany, 819; Canada, 572; and Japan, 59. In contrast, in the case of developing/emerging countries with a broadly socialist orientation, the numbers on COVID-19 deaths per million are quite different: Venezuela, 46; Cuba, 26; Nicaragua, 26; China, 3; and Vietnam, 0.4. Countries with governments in the social democratic spectrum have generally fared better than most of the G7 as well (if not so dramatically), with Denmark having a death rate per million from COVID-19 of 404; Finland, 132; Norway, 112; and New Zealand, 5. Among the Scandinavian countries, the outlier is Sweden, where the Social Democratic Party in recent years has taken a sharp neoliberal turn and the government failed to institute needed measures to protect its population, resulting in death rates per million of 1,247. (Worldometer, “Coronavirus Updates,” February 22, 2021).

Many factors are involved in COVID-19 mortality rates, including population density and the age structure of the populations. Nevertheless, what seems clear from all this is that the more socialist-oriented countries—by prioritizing social needs and public health, plus aggressive testing, tracing, and enlisting the aid of their populations—have generally been more effective in limiting the effects of the disease on their societies. The failure of the wealthier capitalist countries to do so is largely a result of their prioritization of profits over people, thus constituting social murder in Engels’s sense.

The role of social murder in the United States with respect to the COVID-19 pandemic is still clearer if we look at race. Here, the Centers for Disease Control and Prevention (CDC) in late February 2021 indicated that due to socioeconomic factors, including class (socioeconomic status), inequality, access to health care, exposure to the virus related to occupation, and so on, the risk of infection, hospitalization, and death from COVID-19 (adjusting for age) for Native American, Black, and Latinx populations are all higher than for the white population. For the Black population, the risk of death from contracting COVID-19 in the United States is 1.9 times that of the white population. For Native Americans and Latinxs, it is, respectively, 2.4 and 2.3 times that of the white population. For Asian Americans, the risk factors for death from COVID-19 are equal to that of whites—even though their risks of actually contracting COVID-19 are slightly lower than whites (U.S. Center for Disease Control and Prevention, COVID-19, “Risk for COVID-19 Infection, Hospitalization, and Death by Race/Ethnicity,” February 18, 2021). Of the COVID-19 deaths under the age of 45, more than 40 percent have been Hispanic and 25 percent Black (Youyou Zhou and Julia Belluz, “Who Has Died from COVID-19 in the United States?,” Vox, February 16, 2021). The pandemic has tended to hit the white population at increasing levels as it has fanned out from cities to suburban and rural areas. Nevertheless, risk of death from coronavirus in the United States is highest among the poor and decreases the higher the income level.

In Engels’s account of social murder, the accusation is leveled specifically at those in power who are aware of these conditions and do nothing to change them. Since the underlying factors affecting the susceptibility of working-class, poor, and minority populations to COVID-19, as well as other health hazards, are well known, yet constitute the very bases of capitalist exploitation, they remain unaddressed and are in many ways getting worse, as inequality increases rather than decreases. Consequently, the capitalist system and those who promote it are engendering social murder in multiple ways every day and every hour.

In the United States, as in other core capitalist countries, wealth and income inequality have increased during the pandemic, making it extremely profitable for those at the very apex of society, even though the pandemic crisis has led to mass unemployment, loss of income at the bottom, and declining economic growth. Rather than address the social relations of the pandemic, which would necessitate going against the logic of the for-profit system, capital and the state have sought purely technological solutions in the form of vaccines, which are then monopolized by private firms. Although vaccines have now been developed on an emergency basis, current vaccination rates highlight the reality of racial capitalism, in which minorities, though more likely to be classified as “essential workers,” thus suffering greater rates of exposure while faced with higher risk factors in general, are the last to be vaccinated in a system mediated by private health care. As of February 2021, the CDC indicated that the race and ethnicity of those receiving the vaccines was known in 54 percent of cases. Based on this sample, 64 percent of those vaccinated indicated that they were white, 8.7 Hispanic, 6.3 percent Black, 5 percent Asian, 1.7 percent Native American, 0.3 percent Native Hawaiian or Pacific Islander, and 13.7 percent Other (CDC, COVID Data Tracker, “Demographic Characteristics of People Receiving COVID-19 Vaccinations in the United States,” updated February 23, 2021).

On the global scale, vaccine imperialism is an inevitable aspect of pandemics under capitalism. So far, the top six vaccine developers have received $12 billion of public money, while retaining international patent rights allowing them to reap what is projected as $40 billion in global sales. Monopolizing vaccine patents means preventing competition from generics, limiting production worldwide, while maximizing the profits of Big Pharma (Anis Chowdhury and Jomo Kwame Sundaram, “IP, Vaccine Imperialism Cause Death and Suffering, Delay Recovery,” Inter Press Service, February 16, 2021). According to United Nations Secretary General Antonio Guterres on February 17, 2021, 130 nations have not received a single dose of COVID-19 vaccine, while a mere 10 countries have administered 75 percent of all the vaccinations. He called this “wildly unfair” (“Antonio Guterres Criticizes Unequal Global Access to COVID-19 Vaccines, Calls It ‘Wildly Unfair,’” Peoples Dispatch, February 18, 2021). Indeed, more than simply unjust, it is a system, as Engels would say, that commits social murder on a massive—today even planetary—scale.

The March 2021 issue of Monthly Review misspelled the last name of Mateo Crossa Niell, coauthor with Raúl Delgado Wise of “Capital, Science, Technology: The Development of Productive Forces in Contemporary Capitalism.” We regret the error.

Repairing the Soil Carbon Rift
Nostalgia for what never was