Dear Reader, we make this and other articles available for free online to serve those unable to afford or access the print edition of Monthly Review. If you read the magazine online and can afford a print subscription, we hope you will consider purchasing one. Please visit the MR store for subscription options. Thank you very much. —Eds.
Notes from the Editors
by The Editors
(Jun 01, 2021)
Topics: Capitalism Health Inequality Political Economy Places: Americas Global United States 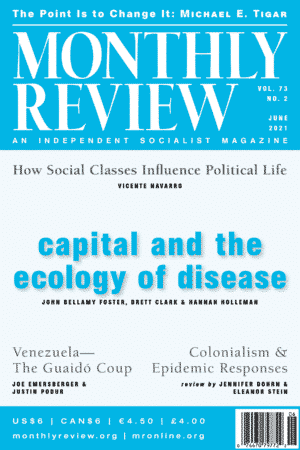 This issue of Monthly Review includes three articles addressing questions of epidemiology and health: John Bellamy Foster, Brett Clark, and Hannah Holleman, “Capital and the Ecology of Disease”; Vicente Navarro, “What Is Happening in the United States?”; and Jennifer Dohrn and Eleanor Stein, “Epidemic Response: The Legacy of Colonialism.” Taken together, they cover a wide range of issues: economic, ecological, epidemiological, and political. But for each of them, the current COVID-19 crisis necessarily looms in the background.

Where capitalism itself is concerned, the dominant view is that the COVID-19 crisis is simply an external, “black swan” event: something that has entered from outside the system, constituting a rare, unpredictable, and unlikely to be repeated occurrence. The world capitalist economy, we are informed, was fundamentally sound prior to the advent of this unforeseen exogenous shock, and it will revive quickly once the SARS-CoV-2 virus is under control.

This received view, however, is incorrect on all counts. From the standpoint of Structural One Health, or historical-materialist epidemiology, COVID-19 can be seen as “ecological blowback” in response to neoliberal globalization and the agribusiness takeover and transformation of vast land areas across the globe. The result has been the destruction on an unprecedented scale of whole ecosystems and vast wilderness areas, primarily in the Global South, replacing these with large agglomerations of urban populations and massive feedlots containing monocultures of domesticated animals, as part of the international food regime. This has served to dislocate untold numbers of species, generating new epidemiological vulnerabilities, and creating conditions ripe for the spillover of pathogens into human populations, transmitted along the circuits of capital. (Alex Liebman, Ivette Perfecto, and Rob Wallace, “Whose Agriculture Drives Disease?,” Agroecology and Rural Economics Research Corps, October 5, 2020; Rob Wallace, “We Need a Structural One Health,” Farming Pathogens, August 3, 2012.)

Seen in this light, COVID-19 is only the latest and currently most ubiquitous manifestation of a growing worldwide epidemiological crisis. It has finally laid to rest what in the late twentieth century was designated as the epidemiologic transition, marking the presumed biomedical triumph over infectious diseases in the developed economies, coupled with the belief that this would inevitably spread via modernization to developing countries as well. As various thinkers, notably Harvard ecologist Richard Levins, writing in Monthly Review in 2000, warned, the destruction of world ecologies was leading to a series of new and reemerging epidemics, including Ebola, AIDS (HIV), Legionnaire’s Disease, and dengue fever—to which we can now add H1N1, H5N1, MERS, SARS, COVID-19 (SARS-CoV-2), and others (Levins, “Is Capitalism a Disease?,” Monthly Review 52, no. 4 [September 2000]).

Although the specific disease pathways were not known, the global expansion of epidemics was, from an ecosocial perspective, clearly in the offing, as was the reemergence of diseases associated with the Industrial Revolution, such as tuberculosis (in this case in multidrug-resistant forms), typhoid (enteric fever), and cholera (which has reentered the Americas)—all resulting from conditions of overcrowding, overwork, bad food, unclean water, deteriorating sanitation conditions, and poverty at one end of the global value chain. This is the logical result of what Karl Marx called the “absolute general law of capital accumulation,” in which wealth and poverty are increasingly polarized, now operating on a global scale. As socialist economist Hyman Minsky observed in 1975 in his now classic work John Maynard Keynes, the “inflationary treadmill” associated with monopoly-finance capital, based on a “scheme of perpetual waste and want,” had as an inevitable consequence a “deterioration in the biological and social environment” (Hyman Minsky, John Maynard Keynes [New York: Columbia University Press, 1975], 166).

Nor is there the slightest validity to the hegemonic view that the capitalist economy was fundamentally sound prior to the arrival of the COVID-19 pandemic. As Riccardo Bellofiore writes, “just 13 years from the subprime crisis and the onset of the great recession, the world economy [in 2020] was heading towards a new, and deeper, world crisis.” The fact that the COVID-19 pandemic arose at precisely this time obscured the growing economic fragility endemic to a system that has no answer to economic stagnation other than unending, crisis-ridden financial speculation. The first economic actions of the United States and most European states in the face of the coronavirus crisis were therefore directed primarily at pouring liquidity into the coffers of financial capital on a scale comparable to that of the 2007–09 crisis—using COVID-19 as an excuse to rescue banks with imperiled balance sheets and stave off a corporate debt crisis. It was only secondarily that minimal cash handouts were provided to workers, aimed not at social welfare, but rather at the longer-term perpetuation of a system of exploitation and “indebted consumption,” or “the real subsumption of labour to finance and debt” (Riccardo Bellofiore, “The Winters of Our Discontent and the Social Production Economy,” Review of Political Economy, April 14, 2021, 6–7; Jan Toporowski, “The Wisdom of Property and the Politics of the Middle Classes,” Monthly Review 62, no. 4 [September 2010]; John Bellamy Foster, R. Jamil Jonna, and Brett Clark, “The Contagion of Capital,” Monthly Review 72, no. 8 [January 2021]).

Though the United States (since the advent of the Joe Biden administration) and leading European states are throwing out much of the neoliberal playbook in the context of the present emergency, and while they are seeking to stimulate their economies with massive inputs of money that may bring the economy back to significant short-term growth, this does not represent a decisive shift to the left. Rather, the primary goal at the top is simply to shore up the system of monopoly-finance capital in its—rather than the population’s—long-term interest. Such an approach will only intensify today’s epochal crisis (ecological, epidemiological, and economic). Hence, the world as a whole is once again faced with the stark alternatives laid out by Marx and Frederick Engels at the beginning of The Communist Manifesto: “a revolutionary reconstitution of society at large, or…the common ruin of the contending classes” (Karl Marx and Frederick Engels, The Communist Manifesto [New York: Monthly Review Press, 1967], 2).

Monthly Review Press’s publication in April 2021 of Sensing Injustice: A Lawyer’s Life in the Battle for Change is a major event. U.S. Supreme Court justice William J. Brennan stated that “Tigar’s tireless striving for justice stretches his arms toward perfection.” Stephen Sedley (Right Honorable Sir Stephen Sedley, former Lord Justice of Appeal for England and Wales) has declared that “there can have been few attorneys since Clarence Darrow whose tally of causes célèbres can match that of Michael Tigar—sailor, teacher, scholar, and warrior.” Tigar won his first case before the U.S. Supreme Court at age 28, resulting in the freeing of thousands of Vietnam War resisters. He has been counsel to Angela Davis, Jamil Abdullah Al-Amin (H. Rap Brown), the Chicago Eight, and leaders of the Black Panther Party. He won a judgement against Chile’s Augusto Pinochet regime for its 1976 murders of opponent Orlando Letelier and his colleague Ronnie Moffitt. Reading Tigar’s reminiscences of battles over fifty years will constitute for some an introduction to many of the greatest struggles in U.S. history over the last half century, while creating a reminder of great battles won and lost for others. As Tigar says, “the sense of injustice is awakened by listening and observing” (480). This book offers an invaluable opportunity not only for sensing injustice, but also for sensing its opposite: the struggles for a just, egalitarian, and sustainable world.

Capital and the Ecology of Disease
From Sandstorm and Smog to Sustainability and Justice: China’s Challenges