Dear Reader, we make this and other articles available for free online to serve those unable to afford or access the print edition of Monthly Review. If you read the magazine online and can afford a print subscription, we hope you will consider purchasing one. Please visit the MR store for subscription options. Thank you very much. —Eds.
Notes from the Editors
by The Editors
(Oct 01, 2021)
Topics: Capitalism Climate Change Ecology Political Economy Places: Global 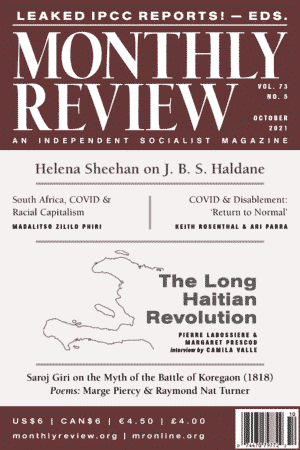 It is a sign of just how serious matters have become—with the UN COP26 talks on climate in Glasgow this November now regarded by many as a last-ditch effort to achieve a global solution on behalf of humanity as a whole—that the early draft versions of both Part II and Part III reports were leaked during the summer. In late June, Part II of AR6 was leaked to the French news agency Agence-France Presse (AFP), which then proceeded to publish an article based on the leaked report (“Crushing Climate Impacts to Hit Sooner than Feared,” June 23, 2021).

Days before the publication of Part I, the key section of Part III, a “Summary for Policymakers,” was leaked by scientists associated with Scientist Rebellion and Extinction Rebellion Spain (mronline.org/wp-content/uploads/2021/08/summary_draft1.pdf). An article announcing the leak, entitled “IPCC Sees Degrowth as Key to Mitigating Climate Change,” was published on August 7 by journalist Juan Bordera and ecologist Fernando Prieto in the Spanish online magazine Contexto y Acción (CTXT). The leaked “Summary for Policymakers” for Part III was the draft document accepted by Working Group III, before the various participating governments—which in the IPCC formal adoption process are able to make changes to the “Summary for Policymakers” prior to its publication—could excise key elements of the report and water it down.

Near the end of August, there was a second leak from Part III of the Sixth Assessment Report emanating from the same sources—this time of Chapter One of the third report (mronline.org/wp-content/uploads/2021/08/chapter01.pdf). This leak was announced in an article by Bordera, Prieto, and three others published in CTXT, entitled “Leaked Report of the IPCC Warns that the Growth Model of Capitalism Is Unsustainable” (MR Online, August 23, 2021). 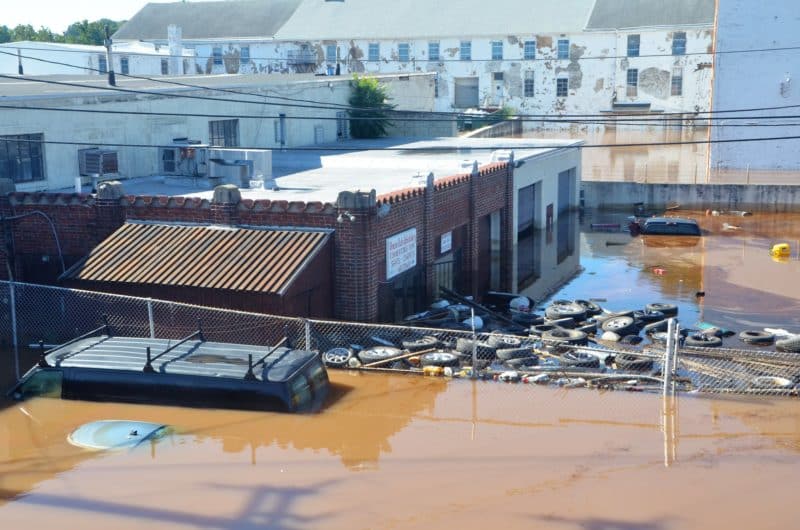 The published Part I, the Physical Science Basis report, contained few revelations for those following climate science, but provided greater certainty and concreteness in its results. What was most significant about the report was that it revealed that, even in the case of SSP1-1.9, the most optimistic projection of the Shared Socioeconomic Pathways—in which carbon emissions globally peak in the next four years, a 1.5°C increase in global average temperature over preindustrial levels would be avoided until 2040, and the goal of net zero carbon emissions would be reached by 2050—the consequences for global humanity would nonetheless be catastrophic by the measure of all historical precedents. This would include various “compound” events of extreme weather sometimes known as global weirding (including heavy precipitation, record floods, heatwaves, droughts, monsoon breakdowns, megastorms, glacier melts, and sea level rise) affecting every region and ecosystem of the world. The second scenario (also optimistic), SSP1-2.6—in which the increase in global average temperature would remain slightly below a 2°C increase, in the “best estimate” for 2081–2100—is a sort of last hope and carries with it dangers disproportionately greater. The other three scenarios are almost unthinkable, although more consistent with current trends, threatening the very existence of civilization and humanity itself.

Under the most optimistic scenario, or SSP1-1.9, in which 1.5°C is not reached until 2040, it is estimated that the mid–term (2041–2060) increase in global average temperature will remain in the 1.2–2°C range, with the best estimate 1.6°C, and then, near the end of the century (2081–2100), will fall back to 1.4°C due to the implementation of negative emissions technologies. Yet, what is important to understand is that even in this highly optimistic scenario (SSP1-1.9) extreme heat and heavy rainfall will be far more frequent. Sea level rise will be irreversible over centuries and maybe millennia. Ocean acidification will increase, carrying its own dangers. The best that can be hoped for at this point, therefore, is that the ultimate threat to humanity will be held off, and by the end of the century global average temperature could be reduced below 1.5°C again. Yet, even then, some of the negative effects of climate change, posing dire threats to billions of people, will nevertheless continue to play out over the twenty-first century. In the case of SSP5-8.5, the fifth and most apocalyptic scenario, resulting from the unhindered continuation of capitalist “business as usual,” global average temperature is projected to increase by the end of the century by 3.3–5.7°C, with the best estimate at 4.4°C, spelling absolute catastrophe for humanity and innumerable species on the planet.

The leaking to AFP of sections of Part II of the Sixth Assessment Report, on “Impacts,” written by Working Group II, has led to a number of statements from Part II of the report being quoted and becoming public knowledge. According to AFP, the report “warns that previous major climate shocks dramatically altered the environment and wiped out most species, raising the question of whether humanity is sowing the seeds of its own demise. [In the words of the report itself:] ‘Life on Earth can recover from a drastic climate shift by evolving into new species and creating new ecosystems. Humans cannot.’” The leaked Part II concludes: “We need transformational change operating on processes and behaviours at all levels: individual, communities, business, institutions and governments. We must redefine our way of life and consumption.”

However, it is Part III on “Mitigation” of the latest IPCC report (AR6) that offers the biggest surprises. On August 7, CTXT indicated in the article by Bordera and Prieto that it had obtained a leaked draft copy of the “Summary for Policymakers” of Part III, accepted by Working Group III, from which a number of key passages were quoted in the article (see also: “We Leaked the Upcoming IPCC Report!,” Scientist Rebellion, scientistrebellion.com/we-leaked-the-upcoming-ipcc-report). Other parts of the leaked “Summary for Policymakers” but not quoted in that article are equally significant and demand close consideration. One key finding of the Part III report is that no new net addition to current coal or gas plants can be built and that existing ones need to be eliminated within a decade if the below-1.5°C target is to be met.

In many ways, the most important part of the “Summary for Policymakers” in the leaked Part III is its insistence that technological improvements that allow for relative decarbonization are not enough. Rather, what is required is a massive social transition in material production and consumption. Although stabilizing the climate below 1.5°C necessitates some carbon dioxide removal (CDR), there is no mere technological fix to the climate change problem. Attempts to intervene massively in the climate by technological means to counteract the effect of carbon emissions carry with them their own extraordinary threats to the planet as a safe space for humanity.

At present, solar and wind technology only account for 7 percent of world energy use, with fossil fuels making up most of the rest. Although solar and wind expansion is to be encouraged, the economic entrenchment of fossil fuel technology has inhibited any real rapid progress. Incremental decarbonization strategies favored by corporations have resulted overall in relative decoupling but not absolute decoupling of emissions due to economic growth, with total carbon emissions rising even as the carbon input of production has declined. The biological or nature-based CDR approaches, such as afforestation/reforestation, ecosystems restoration, and soil management, are those that offer the most hope in the immediate future. In contrast, the potential for direct air capture and carbon storage, enhanced mineral weathering, ocean alkalinity enhancement, and bioenergy and carbon capture and storage are all limited by lack of research and development, high cost, and potentially dangerous consequences. Nuclear energy poses too many obstacles and hazards to be an important part of the solution. In general, “the scale-up, diffusion and global spread of carbon capture and storage (CCS), nuclear energy, and carbon removal (CDR) technologies” are questionable and cannot play the primary role in climate change mitigation.

Thus, the overall thrust of the AR6 “Mitigation” (or Part III) report is—for the first time in the IPCC process—that it is essential to turn to demand-side strategies, exploring cutbacks in energy use and across all economic sectors, as well as aggressively pursuing conservation and low-energy paths. Cities need to be redesigned to become “new cities” constructed on an entirely different sustainable basis. Transportation has to move away from sports-utility vehicles and other gas guzzlers, and shifted toward mass transportation, electrified cars, bikes, tuk-tuks (auto rickshaws), and motorbikes. Heavy meat-based diets have to be curtailed. Plastic production needs to be drastically reduced. “In low-energy demand scenarios,” the report states, “final energy demand is 40% lower in 2050 than in 2018, while wellbeing is maintained and improved.” What is required “is fundamental structural changes at the global level” (and at every other level) in production and consumption systems. Accelerated climate-change transitions require a shift to entirely new systems of sustainable development. “Transformative change” must replace incremental changes favored by the status quo.

The Part III “Summary for Policymakers” places a strong emphasis on climate injustice as a central aspect of the whole climate problem. Thus, the report emphasizes that “the top 10% of emitters (the global wealthy on a per capita basis) contribute ten times as much to global emissions as the poorest 10%.” Specifically, “the global richest 10% contribute about 36–45% of global GHG [greenhouse gas] emissions, while the world’s poorest 10% contribute around 3–5%.” As much as “46 percent of developing country CO2 emissions in 2010 and 41% in 2015 were from export production to developed countries,” indicating that accounting for climate emissions should be on a consumption rather than production basis. Half of all aviation emissions stem from the wealthiest 1 percent.

At every point, the “Summary for Policymakers” in Part III indicates that the “just transition concept,” initially promoted by labor unions, must be incorporated into climate change policy. “Lack of integration of environmental justice in climate mitigation activities…risks growing inequality at all levels” and inhibits “effective climate mitigation,” which requires a just transition that ensures that “workers, frontline communities and the vulnerable are not left behind in low-carbon pathways.” Even more startlingly, the report declares: “Increasing participation by women, and racialised and marginalised groups, amplifies the impetus for climate action. Collective action through formal social movements and informal lifestyle movements expands the potential for climate policy and supports system change (high confidence). Climate strikes have given voice to youth in more than 180 countries.”

The leaked Chapter One of Part III of AR6 is primarily a review of the recent literature on mitigation. However, it is notable, in comparison to earlier IPCC reports, in citing a number of critics on the left, including Jason Hickel, Andrew Jorgenson, and Andreas Malm, calling attention to fundamental issues of political economy and power, such as the dominance of fossil capital, the reality of global unequal exchange, and the rationality of degrowth. As the report indicates at one point, referring to the analysis of Malm and others: “The character of social and economic development produced by the nature of capitalist society” is viewed by many political-economic critics “as ultimately unsustainable.” Indeed, a close, critical reading of the leaked Chapter One leaves little doubt that radical system change is now the only remaining path to a sustainable future for humanity. As UN secretary general António Guterres exclaimed in a statement accompanying the release of the new IPCC report, this is “a code red for humanity.” There is simply no hope for the world unless people everywhere are determined to surmount the main barrier to human survival: the barrier of capital itself.

We think MR readers will enjoy the feature article “The Unemployed Epidemiologist Who Predicted the Epidemic” by Eamon Whalen about MR and Monthly Review Press author Rob Wallace in the September 6–13, 2021, issue of the Nation.