Dear Reader, we make this and other articles available for free online to serve those unable to afford or access the print edition of Monthly Review. If you read the magazine online and can afford a print subscription, we hope you will consider purchasing one. Please visit the MR store for subscription options. Thank you very much. —Eds.
Notes from the Editors
by The Editors
(Nov 01, 2021)
Topics: History Marxism Movements Philosophy Strategy Places: Americas United States 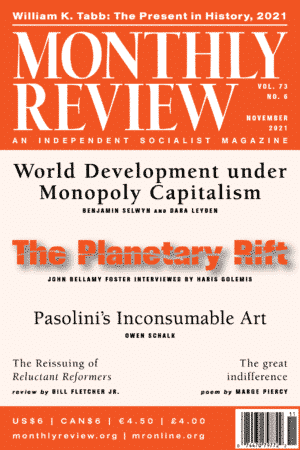 A problem raised repeatedly in Monthly Review over the last two decades (see the Review of the Month in this issue) is the need to transcend the deep chasm in historical materialism, extending back to the 1920s, between the Western Marxist philosophical tradition and the Marxism of the Second and Third Internationals. This division has been closely associated with so-called Western Marxism’s rejection of the dialectics of nature, as conceived especially in the later work of Frederick Engels. By promoting a dialectical natural science, Engels, in the words of Leszek Kołakowski in his Main Currents of Marxism (New York: Norton, 2005, 327), was “allied to scientism and positivism,” the latter referring to extreme empiricism, mechanicism, and the naive, unphilosophical application of natural-scientific principles to the historical realm.

Engels, in this perspective, was to be faulted with allegedly breaking with Karl Marx’s own dialectical world view, leading to the positivistic corruption of Marxism, and eventuating in the worst failings of Soviet thought. Yet, as Raymond Williams observed in Keywords (Oxford: Oxford University Press, 1983, 238–39), the concept of “positivism” has often been used in such criticisms as little more than a “swear word,” lacking concrete reference, and employed simply to circumvent the difficult ontological, epistemological, and methodological questions associated with science, empiricism, and materialism, which are better dealt with directly.

Although the Western Marxist tradition advanced dialectical thinking in numerous ways, the unfortunate consequence of its categorical rejection of the dialectics of nature was that the left generally came to be alienated from natural science and materialism itself, hindering its critique of capitalism’s war on the earth. (There was, however, a “second foundation” within Marxism, particularly in Britain, emerging out of Marx, Engels, and “dialectical materialism” that was to play a leading role in the twentieth-century emergence of critical ecology—see John Bellamy Foster, The Return of Nature [New York: Monthly Review Press, 2020].)

It is no doubt because the theoretical stakes are so high, particularly in relation to the development of ecosocialism and the revival of Marxian materialism, that extreme calumnies continue to reappear, seeking to downgrade Engels’s complex analysis of the changing dialectics of nature and history to the level of a crude positivism. A prime example of this type of polemic is to be found in Jonathan Sperber’s discussion of Engels in his much-lauded (in the mainstream press) biography, Karl Marx: A Nineteenth-Century Life (New York: Norton, 2013, 415–18). Sperber was so determined in his book to establish that Engels “was always a positivist,” that he offered, as exhibit one, the young Engels’s observation, in an October 1844 letter to Marx, that, due to industrial “progress” in Germany, “whole forests are extirpated”—as if the mere allusion to “progress,” or the recognition of ecological destruction emanating from a developing industrial capitalism, constituted irrefutable proof of Engels’s positivistic, scientistic views. Engels is then quoted as stating, in an 1865 letter to Friedrich Albert Lange, that the entire modern scientific doctrine of energy can be usefully analyzed from the standpoint of G. W. F. Hegel’s dialectic, which leads Sperber to state, illogically, that Engels was thereby erroneously “identifying Hegel with positivism.”

However, Sperber’s ultimate attempt to impugn Engels, in this respect, following thinkers like Kołakowski, was to charge him with “rejecting scientific findings when they did not fit his [materialist] philosophical view.” Thus, the “positivist elderly Engels” is said to have been guilty of “denouncing the Second Law of Thermodynamics,” or the entropy law, even calling it “stupid,” thereby abandoning modern physics and demonstrating that his scientism was a mere ideological stance. Nevertheless, the quotes from Engels on which Sperber relies are taken entirely out of context and demonstrate a complete lack of comprehension on his part of the historical debates taking place in the nineteenth century to which Engels was referring. In fact, what Engels was criticizing, as contemporary scholarship has definitively shown, was not the second law of thermodynamics, but rather its problematic cosmological corollary, the so-called heat death of the universe, which has always been contested by leading physicists, and today has little meaning (John Bellamy Foster and Paul Burkett, “Classical Marxism and the Second Law of Thermodynamics,” Organization and Environment [2008]: 3–37).

Indeed, Sperber’s erroneous criticisms of Engels gave rise to much hilarity in a splendid blog post on “Engels and Entropy,” on October 2, 2013, by Glenn Branch of the National Center for Science Education. As Branch wrote, upon reading Sperber: “Great Kelvin’s ghost! I thought. American creationists love misusing the Second Law of Thermodynamics and hate communism: finding a communist thinker of Engels’s stature rejecting their favorite scientific principle because it implies divine creation would be a gift to them.” But as Branch concludes: Engels in this passage “isn’t calling the Second Law stupid; he’s calling a particular cosmological speculation [the heat death of the universe] in part based on it stupid. That’s quite different.… Such a position was perfectly within the mainstream of nineteenth-century scientific thought. When it comes to rejection of the Second Law of Thermodynamics, only fools would rush in where Engels feared to tread.”

“Ignorance,” Baruch Spinoza said, “is no argument.” A similar misrepresentation to that presented by Sperber can be seen in an article by Brian Lloyd entitled “Karl Marx in the Anthropocene,” published on Resilience.org on September 22, 2021. Complaining of the rapid growth of interest in Marxian ecology within the environmental movement, Lloyd adopts the position, now popular in some circles of the left, of pronouncing that “Karl Marx was a Cartesian [dualist] head to toe” and thus an enemy of nature. His evidence? That Marx believed, based on the labor theory of value, that “human labor was alone creative,” and worth sustaining, “all else was inert, raw stuff to be worked up into something that humans wished to use or exchange.… The dualism of Cartesian philosophy was thereby reproduced” in Marxist economics, as well as other traditions, “with unhappy consequences for every living and sensing being that fell under the sway of minds so rationally deranged.… To render history amenable to scientific analysis, Marx did to it what Descartes did to nature—he mechanized it.”

However, Lloyd, who might well consult a good dictionary, confuses a number of different meanings of the word value, conflating (1) the intrinsic value of things and (2) natural-material use values (the worth that human beings place on what Marx called the “natural form” of existence) with (3) the commodity value of capitalist economies. Marx utilized the labor theory of value of classical economics to critique the capitalist valorization process rooted in the expropriation of nature and human bodies and the exploitation of labor. In doing so, he distinguished (as did other classical economists) real wealth, derived from nature and genuine human needs, from the monetized value form of capitalism. As Marx said in the opening paragraph of his Critique of the Gotha Programme, “Labour is not the source of all wealth. Nature is just as much the source of use values (and it is surely of such that material wealth consists!).” It was capitalism’s “negative, i.e., destructive” pursuit of value/exchange value, treating nature as a “free gift…to capital,” that accounted, according to Marx, for ecological crises, as indicated in his theory of metabolic rift. (See Karl Marx, Critique of the Gotha Programme [New York: International Publishers, 1938], 3; Karl Marx and Frederick Engels, Collected Works, vol. 37 [New York: International Publishers, 1975), 732–33; Marx, Capital, vol. 1 [London: Penguin, 1976], 637–38; John Bellamy Foster and Paul Burkett, “Value Isn’t Everything,” Monthly Review [November 2018].)

With respect to Engels’s supposed positivism and his mythical rejection of the second law of thermodynamics, and Marx’s alleged Cartesian dualism and presumed mechanistic rejection of the intrinsic value of nature, we are tempted to ask: How is it possible that such absurd claims could still be circulating among Marxists and other leftists (and Marxologists) today? Why are these issues so poorly understood on the left a century and a half later? And how should we respond? The truth is that Marx and Engels’s approach to historical-materialist Wissenschaft (system of knowledge, science—see Joseph Fracchia, “Dialectical Itineraries,” History and Theory [1999]) did not sever the historical-material world from the natural-material world. Quite the contrary, they saw them as interconnected. In an age of planetary ecological crisis, giving rise to the necessity of an ecological and social revolution, it is essential that this complex dialectical totality be once again approached in a unified way. Marxism needs to recover its classical synthesis, long torn apart, in order to develop a meaningful praxis for the twenty-first century.

The concept of racial capitalism has taken on new force today within Black radicalism and Marxism, largely due to the growing influence of Cedric Robinson’s Black Marxism (originally published, London: Zed, 1983). A very important work in this respect, first published in the July–August 1981 issue of Monthly Review and then released as a book by Monthly Review Press, was John S. Saul and Stephen Gelb’s The Crisis in South Africa: Class Defense, Class Revolution, which was organized around a systematic inquiry into “racial capitalism” in the South African context. An important aspect of this was Saul and Gelb’s explanation of “the logic of racial capitalism” (9), denying that capitalism and racism were somehow incompatible and insisting that “racial oppression and capitalist exploitation have come to feed on one another.” Their argument centered on “proletarianization under racial capitalism” (92) in which they focused particularly on migrant labor. Saul and Gelb’s framework, we believe, is of great significance today, not only to the examination of post-apartheid South Africa, but in the widening explorations of racial capitalism in the world as a whole.

On September 23, 2021, Federal Reserve economist Jeremy B. Rudd issued a discussion paper, through the Federal Reserve, that questioned the inanities of the Fed’s neoclassical economic modeling of inflation expectations, since it lacked “any sort of empirical foundations” and constituted “arrant nonsense.” More remarkable, however, was a blunt observation in a footnote: “I leave aside the deeper concern that the primary role of mainstream economics in our society is to provide an apologetics for a criminally oppressive, unsustainable, and unjust social order.” This questioning is a sign of the extraordinarily deep economic and ecological malaise of contemporary monopoly-finance capital, and the dire threat it poses to the world’s population, coupled with the existence of a ruling class that no longer has any claims to enlightenment or social responsibility. Such dissensions within establishment circles are likely to become more and more common. (Jeremy B. Rudd, “Why Do We Think That Inflation Expectations Matter for Inflation? (And Should We?)” [Finance and Economics Discussion Series, Divisions of Research and Statistics and Monetary Affairs, Federal Reserve Board, Washington DC, September 23, 2021], 1.)

The Planetary Rift
The Eyes of Texas and the Nays