Dear Reader, we make this and other articles available for free online to serve those unable to afford or access the print edition of Monthly Review. If you read the magazine online and can afford a print subscription, we hope you will consider purchasing one. Please visit the MR store for subscription options. Thank you very much. —Eds.
Preface
by Manolo De Los Santos and Vijay Prashad
(Jan 01, 2022)
Topics: History Movements Revolutions Places: Americas Cuba 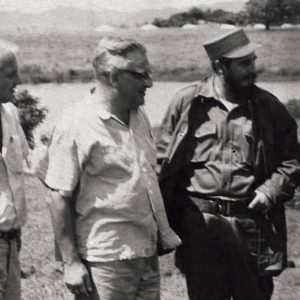 Manolo De Los Santos is co-executive director of the People’s Forum and researcher at Tricontinental: Institute for Social Research. He coedited, most recently, Viviremos: Venezuela vs. Hybrid War (LeftWord, 2020). Vijay Prashad is the executive director of Tricontinental: Institute for Social Research. He is the author of Washington Bullets: A History of the CIA, Coups, Assassinations (Monthly Review Press, 2020).

They are guest editors of this special issue, The Cuban Revolution Today: Experiments in the Grip of Challenges.

On November 1, 2018, John Bolton, the national security advisor of U.S. president Donald Trump, unveiled a phrase with a sinister implication: troika of tyranny. The U.S. government, Bolton said, would focus attention on overthrowing the governments in Cuba, Nicaragua, and Venezuela. Bolton announced that the government had tightened its blockade on Cuba with more sanctions—including the implementation of Title III of the Helms-Burton Act of 1996, allowing U.S. citizens to sue any person or company who benefited from property confiscated since the 1959 Cuban Revolution. Travel and money transfers to Cuba were restricted and several Cuban businesses—including its national airline—faced new sanctions. At the end of this cycle, Trump’s administration placed 243 new sanctions on Cuba.

Anticipation that Joe Biden would roll back the Trump sanctions was quickly dispelled when his press secretary Jen Psaki said on March 9, 2021, that “a Cuba policy shift is not currently among President Biden’s top priorities.” The previous month, senator Marco Rubio and Luis Almagro (the secretary general of the Organization of American States) began a social media campaign called “Crisis in Cuba: Repression, Hunger, and Coronavirus.” It should be noted that, at the time, there was not a single case of COVID-19 on the island. The U.S. campaign to overthrow the Cuban Revolution accelerated.

Twice in 2021, first on July 11 and then on November 15, the U.S. government and politicians joined with right-wing Cuban exiles (mainly in Florida) to egg on protests inside Cuba. U.S.-funded organizations began a social media campaign, a Bay of Tweets, that was designed to provoke uprisings among people who suffered from the social impact of the U.S.-imposed blockade and the COVID-19 pandemic. On July 11, in the Cuban town of San Antonio de los Baños, protests took place. Cuba’s president, Miguel Díaz-Canel, heard the news and drove forty miles from Havana to talk to the disgruntled and see what could be done. Across Cuba, tens of thousands of patriots walked onto the streets with their national flag and with flags of the July 26 Movement that formed the core of the revolutionaries in 1959. In those crowds was Johana Tablada who works in the Cuban Foreign Ministry. “We are human beings who live, work, suffer, and struggle for a better Cuba,” she told us. “We are not bots or troll farms or anything like that.”

The social media campaign that came to be called J11 was driven by Florida-based companies and websites, many of them funded by the U.S. government through its National Endowment for Democracy and the Open Society Foundations (including Cubanos por el Mundo, Cubita NOW, CubaNet, El Estornudo, Periodismo de Barrio, Tremenda Nota, El Toque, and YucaByte). At the heart of this campaign is the Assembly of the Cuban Resistance, a coalition of anticommunist groups that calls for a U.S. invasion of Cuba. Its head, Mauricio Claver-Carone, is former head of Cuba Democracy Advocates, Trump’s main advisor on Cuba, and now president of the Inter-American Development Bank (based in Washington DC). The hashtag #SOSCuba was mobilized and amplified across various platforms by troll farms, trying to generate a consensus about a large-scale uprising against the Cuban Revolution.

Having failed on July 11, 2021, these same forces tried again in November. First, a group called Archipiélago announced that it would hold protests on November 20, a statement amplified by the U.S. government and its agencies. When it was learned that Cuba planned to open its borders on November 15, the protest was then announced for that date. Biden administration officials threatened Cuba with more debilitating sanctions if the government prevented the uprising. Archipiélago’s social media demonstrated that it was in favor of both regime change and the use of violence to achieve its ends. (Previous violent actions took place on April 30, 2020, when an assault rifle was fired at the Cuban embassy in Washington, and on July 27, 2021, when two individuals threw a Molotov cocktail at the Cuban embassy in Paris.) U.S. politicians such as Senator Rubio, senator Rick Scott, congresswoman María Elvira Salazar, and congressman Carlos Giménez ramped up the pressure against Cuba, calling for more sanctions.

Despite the call for a Civic March for Change, nobody took to the streets on November 15, 2021. A few days before, young defenders of the Cuban Revolution wore red scarves, assembled at Havana’s Central Park, and held concerts, poetry readings, documentary screenings, book presentations, and speeches. When the youth—the Pañuelos Rojos (Red Scarves)—invited him, President Díaz-Canel joined them. They defeated the hybrid attack for now.

But the U.S.-imposed blockade and hybrid war continue. This special issue of Monthly Review is motivated by the “maximum pressure” campaign that has intensified in Washington DC.

Very early into the 1959 Cuban Revolution, it became apparent that the U.S. government would take a hostile position against it. Despite recognizing the new government of president Manuel Urrutia a week after the revolutionaries overthrew the Fulgencio Batista dictatorship, the U.S. government proceeded to undermine the Cuban Revolution, particularly after Fidel Castro was appointed prime minister in February 1959. When Castro visited the United States in April, president Dwight Eisenhower refused to see him. Matters would only deteriorate further until the United States broke ties with Cuba in 1961 and put in place a range of destabilization mechanisms run by the CIA (assassination attempts against Castro, terrorist actions on the island under Operation Mongoose, the Bay of Pigs invasion by right-wing Cuban exiles). This was the general tenor of official U.S. policy toward Cuba.

Two other political and social forces within the United States, however, immediately embraced the Cuban Revolution: the Black liberation movement and the socialist projects.

When Castro arrived in New York to attend the UN General Assembly meeting in 1960, before the U.S. government officially broke ties with Cuba, the Cuban delegation found it impossible to get hotel rooms in the city. Malcolm X arranged for Castro and the Cubans to stay at Hotel Theresa in Harlem, showing the deep ties between the Black liberation movement and the Cuban revolutionaries (when Castro was denied entry into Eisenhower’s lunch with Latin American leaders, he held his own gathering at a coffee shop in Harlem for employees of the Hotel Theresa, “the poor and humble people of Harlem,” as he put it). At a meeting between Castro and Malcolm X, the latter told the Cuban of the revolutionary process, “there are twenty million of us and we always understand.”

In March 1960, Paul Sweezy and Leo Huberman—the editors of Monthly Review—traveled to Cuba to have a look at the revolution with their own eyes. They met the main leaders of the revolution (Castro and Che Guevara), officials of the new state and new civic bodies, and people from all walks of life. When they returned to New York, Sweezy and Huberman wrote down their reflections and published them in a special issue of their socialist magazine (July–August 1960), called Cuba: Anatomy of a Revolution (published as a Monthly Review Press title later that year). It was one of the first books to make the case that the Cuban Revolution—driven by the ferocious determination to protect its sovereignty—would evolve necessarily in a socialist direction. Huberman and Sweezy returned to assess the revolution at several points. Huberman’s Socialism in Cuba (1960) was well-received on the island for its sympathetic critique of the Cuban process. The relationship between Monthly Review (both the magazine and the press) and the Cuban Revolution continued from then to now, this current special issue being another indicator of that linkage.

Monthly Review Press was the original English-language publisher of Che Guevara’s Reminiscences of the Cuban Revolutionary War (1968), and the magazine carried several articles by Che. After Che was assassinated in 1967, Eduardo Galeano’s fine reflection on him, “Magic Death for a Magic Life,” was published in Monthly Review in January 1968. Paul Sweezy and Paul Baran dedicated their classic book Monopoly Capital (1966) to Che. Paul Baran had traveled to Cuba in September and October 1960, along with Sweezy and Huberman, who were there for the second time. His “Reflections on the Cuban Revolution” was published in the magazine in January 1961. Due to his strong support for the Cuban process, Baran was targeted at Stanford University (he had his first heart attack after returning from Cuba and felt the immensity of the pressure of supporting the revolution during the Bay of Pigs invasion and the Missile Crisis, succumbing to a heart attack in 1964).

We are grateful for the opportunity to present this special issue within the pages of Monthly Review, carrying forward a tradition established six decades ago. The stance of the magazine reflects Castro’s June 1961 comments at the Biblioteca Nacional, where he asserted that criticism should be from within the revolution, mirroring the view of one of the most important radical sociologists in the United States, C. Wright Mills. In his Listen, Yankee: The Revolution in Cuba (1960), Mills wrote that we don’t worry about the Cuban Revolution, but we worry with it. This volume is put together in that spirit.