Dear Reader, we make this and other articles available for free online to serve those unable to afford or access the print edition of Monthly Review. If you read the magazine online and can afford a print subscription, we hope you will consider purchasing one. Please visit the MR store for subscription options. Thank you very much. —Eds.
Notes from the Editors
by The Editors
(Sep 01, 2022)
Topics: Ecology Marxist Ecology Political Economy Places: Americas Europe Global Spain United States 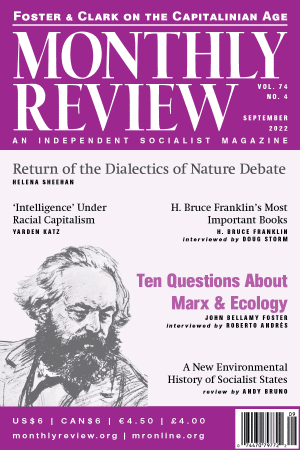 A Statement by John Bellamy Foster and Brett Clark

Our article on the relation of capitalism to the Anthropocene, “The Capitalinian: The First Geological Age of the Anthropocene,” published in the September 2021 issue of Monthly Review, was directed at the question of how to characterize the current geological age of Earth history. In recent years, scientists have proposed that the Holocene Epoch of the last 11,700 years should be seen as having been succeeded by the Anthropocene Epoch, reflecting the fact that anthropogenic (as opposed to nonanthropogenic) forces now constitute the dominant factors in Earth System change and lie behind the planetary ecological crisis. However, the designation of the Anthropocene Epoch within the Geological Time Scale, though still not officially approved by the International Union of Geological Sciences, means that we are now not only in a new geological epoch, but also in a new geological age, since every epoch has a number of ages nested within it.

In our article, we proposed that the first geological age of the Anthropocene Epoch, following the Meghalayan Age—the last age of the Holocene—be named the Capitalinian Age, reflecting the fact that it is the capitalist system in its mature phase of globalized monopoly capitalism that has given rise to the current anthropogenic rift in the Earth System. This framework was subsequently carried forward in a new book by one of us (John Bellamy Foster, Capitalism in the Anthropocene [Monthly Review Press, 2022]) and in our article “Socialism and Ecological Survival,” published in the July–August 2022 issue of Monthly Review.

Unknown to us when developing this analysis, Carles Soriano, a geologist and volcanologist at Geosciences Barcelona (part of the Spanish National Research Council, or CSIC), in a 2020 Geologica Acta article titled “On the Anthropocene Formalization and the Proposal by the Anthropocene Working Group,” had already introduced—prior to our discussion of the Capitalinian—the notion of the “Capitalian as a Stage of the Anthropocene Epoch.” In this article, Soriano argues that this designation is necessary to ensure that “a truly comprehensive understanding of Earth history is obtained, which comprises the ultimate causes of the ongoing planetary transformation and its stratigraphic expression.”

Table 1. Proposal to Formalize the Anthropocene as an Epoch of the Geological Time Scale and Capitalian as an Age 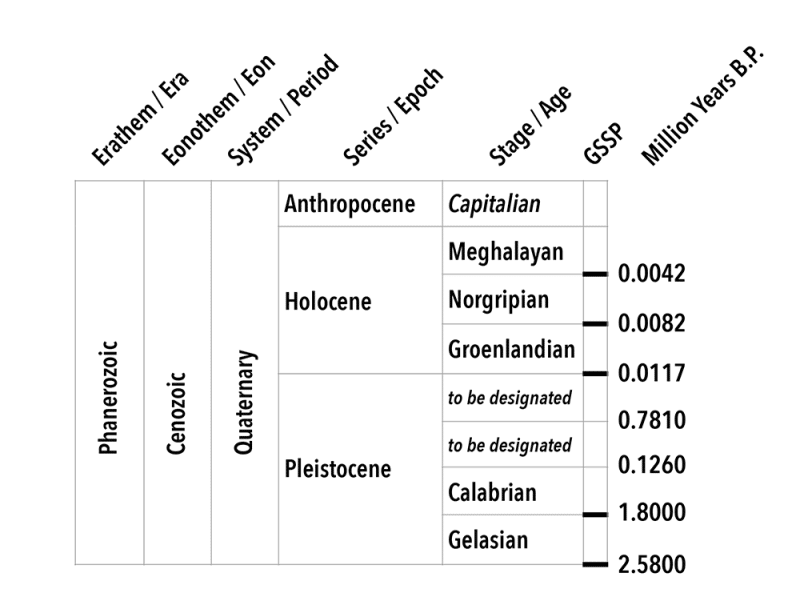 As a historical materialist as well as a geologist, Soriano argues that “a comprehensive understanding of the Anthropocene cannot be untangled from the study of the different forms of social organization in history,” and that it specifically requires that this be integrated with a systematic grasp of the capitalist mode of production, and how it has affected the “metabolic relation” of humanity to the environment, creating the present “Anthropocene crisis.” Hence, in order to capture the historical factors governing present-day geological changes giving rise to the Anthropocene Epoch, Soriano put forward the conception of the Capitalian Age, introducing the same broad geological boundaries that we were to adopt in our proposal in Monthly Review with respect to the Capitalinian Age—though there are some differences in the way in which the Capitalian and Capitalinian are dated. Soriano’s schema of the Geological Time Scale (in terms of eon, era, period, epoch, and age), which incorporates the proposed Anthropocene Epoch and his proposed Capitalian Age, is shown in Table 1.

Our approach, in contrast, sees both the Capitalinian and the Anthropocene as arising at the same time, around 1950. Thus, the Anthropocene and Capitalinian do not correspond to the appearance of the capitalist mode of production in the fifteenth century, nor are they seen as emerging at the time of the Industrial Revolution in the United Kingdom. Rather, both the new geological age and the new geological epoch arise in the phase of globalized monopoly capitalism in the period after the Second World War, symbolized not only by the first atomic explosions (including the U.S. bombings of Hiroshima and Nagasaki in 1945), but even more so by the thermonuclear tests in the 1950s, which left behind radionuclides that serve as distinct signatures within the geologic record. Radioactive fallout from nuclear testing also engendered the modern environmental movement. This periodization of the environmental crisis/environmental age, seeing it as arising in 1945 or in the early 1950s, has a longstanding basis in Monthly Review going back to such works as Paul M. Sweezy’s “Capitalism and the Environment” (Monthly Review, June 1989) and John Bellamy Foster’s The Vulnerable Planet (Monthly Review Press, 1994).

The almost-simultaneous, independent proposals for the designation of a Capitalian/Capitalinian Age, as the first geological age of the Anthropocene Epoch, presented by Soriano and us, was no mere coincidence, but the product of the developing interface between Marxian social science and natural science in the context of the current “Anthropocene crisis,” a term used by both Soriano and ourselves. Soriano is a leading representative today of the long tradition of the dialectical and materialist views within natural science, constituting what has been called a “second foundation” of Marxian theory, in which one can point to such notable figures as J. D. Bernal, Joseph Needham, J. B. S. Haldane, Lancelot Hogben, Hyman Levy, Christopher Caudwell, V. Gordon Childe, Virginia Brodine, Stephen Jay Gould, Richard Levins, Richard Lewontin, Steven Rose, Hilary Rose, Rob Wallace, and many others (see John Bellamy Foster, The Return of Nature [Monthly Review Press, 2020], 7).

Soriano’s understanding of the Anthropocene crisis and its relation to capitalism (and the beginning of the Capitalian/Capitalinian Age) is deeply informed by Karl Marx’s theory of metabolic rift, as well as István Mészáros’s notion of “social metabolic reproduction.” As Soriano writes:

The alienated form of social metabolism under capitalist production necessarily leads to a rupture or rift with the natural laws prescribed by the universal metabolism between humans and nature.… The metabolic rift as exposed in Marx’s Capital was mainly conceived as a rupture of the nutrients cycle between the soil and cities.… Since Marx’s time, the metabolic rift has extended and intensified to involve many other portions of nature, such as the deep substrate, the atmosphere, the biosphere, etc. In this regard, the metabolic rift has globalised and now affects most aspects of the social metabolism between humans and nature. (Carles Soriano, “The Anthropocene and the Production and Reproduction of Capital,” Anthropocene Review 5, no. 2 [2018]: 210)

This approach is rooted in a conception of Marxism as both dialectical and materialist, extending to the dialectics of nature, on which Soriano has provided a profound epistemological discussion. “Most naturalists,” he points out, “are unaware of the dialectic constitution of Nature and they are also unaware of the dialectic and materialistic epistemic view they are following in the scientific understanding of Nature.” Nevertheless, “naturalists are forced to spontaneously undertake this epistemic view because the studied object is a material and dialectical reality.” Ironically, while “most natural science” today thus “takes a dialectic and materialist epistemic view,” mainstream social science is dominated by a narrow positivistic epistemology that eschews dialectical complexity, thus reinforcing idealist views (Carles Soriano, “Epistemological Limitations of Earth System Science to Confront the Anthropocene Crisis,” Anthropocene Review 9, no. 1 [2020]: 112, 122). On the dialectics of nature, Soriano usefully remarks:

Nature is dialectical too, and the dialectics of Nature is not merely a theoretical construct but a construct that is only possible because Nature is inherently so. Otherwise, how is it possible to “construct” dialectics if it is not yet in the studied object, which is the ultimate source of any empirical perception? The origin of life and the evolution of species are examples of dialectics in Nature. Organic molecules, which are the basis for the origin of life on Earth, evolve as a “negation of” or “in contradiction to” inorganic molecules and constitute a new structure of matter with new and particular laws [in contradistinction to] the laws of the inorganic realm.… Natural systems are historical. They evolve autonomously by overcoming successive contradictions, and at any step of the evolution the newly established conditions assume in their core the structural laws and the evolution of previous stages. (Soriano, “Epistemological Limitations,” 121–22)

Taking his cue from Marx’s eleventh thesis on Ludwig Feuerbach, Soriano concludes that it is necessary to take “practical actions to transcend the planetary crisis and not merely to alleviate it,” by forging “a non-capitalist relationship with nature” (Soriano, “Epistemological Limitations,” 124; “Anthropocene and the Production and Reproduction of Capital,” 203). Indeed, the planetary ecological crisis, and the need for a planetary ecological revolution in response, are giving rise to radical new developments in science in the Capitalian/Capitalinian Age of the Anthropocene. The work of Soriano is, in our view, a clear manifestation of this new revolutionary-dialectical shift aimed not simply at understanding today’s catastrophic world developments, but rather seeking to transcend them.

We would like to notify MR readers of a major new journal, Marxism and Sciences: A Journal of Nature, Culture, Human and Society, with Ali C. Gedik as editor-in-chief and an accomplished set of scholars on the international editorial and advisory boards, including a number of MR authors. The first issue, volume 1, number 1, was released in winter 2022 and was dedicated to the theme of “The Actuality of Engels.” We can personally attest to the high level of scholarship in the journal related to this very important topic. A full PDF of this first issue can be obtained through their website, marxismandsciences.org.

John Bellamy Foster, “‘Notes on Exterminism’ for the Twenty-First-Century Ecology and Peace Movements,” May 2022, page 5, paragraph 3, line 3: “megaton” should be “kiloton.”

Alejandro Pedregal and Juan Bordera, “Toward an Ecosocialist Degrowth,” June 2022, page 45, last paragraph: “Survey of Policymakers” should be “Summary for Policymakers