Dear Reader, we make this and other articles available for free online to serve those unable to afford or access the print edition of Monthly Review. If you read the magazine online and can afford a print subscription, we hope you will consider purchasing one. Please visit the MR store for subscription options. Thank you very much. —Eds.
Notes from the Editors
by The Editors
(Jan 01, 2023)
Topics: Climate Change Ecology Imperialism Inequality Political Economy Places: Global 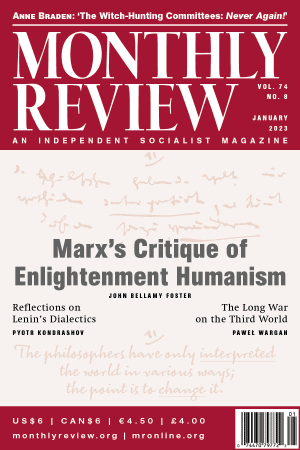 The United Nations Framework Convention on Climate Change (UNFCCC) was signed thirty years ago this year, at the 1992 Earth Summit in Rio. It was one of three “Rio conventions,” the other two consisting of the Convention on Biological Diversity and the Convention to Combat Desertification. The UNFCCC went into effect in 1994 and had its first implementation in the Kyoto Protocol of 1997. Yet, only a decade after the Rio Earth Summit, at the time of the UN World Summit on Sustainable Development in Johannesburg in 2002 (often referred to as the Second Earth Summit), it was clear that the Kyoto Protocol and the UNFCCC process as a whole were being aborted by capitalism. In the introduction to his book published at that time, Ecology Against Capitalism (Monthly Review Press, 2002), MR editor John Bellamy Foster concluded an analysis of the UNFCCC process by saying:

No matter how urgent it is for life on the planet as a whole that the greenhouse gas buildup in the atmosphere be stopped, the failure of the Kyoto Protocol significantly to address this problem suggests that capitalism is unable to reverse course—that is, to move from a structure of industry and accumulation that has proven to be in the long run (and in many respects in the short run as well) environmentally disastrous. When set against the get-rich-quick imperatives of capital accumulation, the biosphere scarcely weighs in the balance. The emphasis on profits to be obtained from fossil fuel consumption and from a form of development geared to the auto-industrial complex largely overrides longer term issues associated with global warming—even if this threatens, within just a few generations, the planet itself.

Not only has the UNFCCC process not served to reduce carbon emissions, but more than half of all emissions since the Industrial Revolution have occurred since its establishment in 1992. Today the UNFCCC process has become a ghostly affair lacking even the appearance of progress or meaningful actors, with no relation to the kinds of revolutionary-scale transformations that are needed throughout the globe. COP27, held in November in Sharm-el-Sheikh, Egypt—an isolated tourist resort chosen to keep the public away—produced net zero in terms of climate mitigation. Over six hundred lobbyists from fossil fuel corporations were present. Political figures from the wealthy nations of North America and Europe issued vague public pronouncements before the cameras and then cloistered themselves in back rooms to plan the Ukraine War and increased fossil fuel production. Violations of already inadequate national climate plans were legitimated on the basis of support for Kiev, high energy prices, and a looming recession (Thorfinn Stainforth and Bartosz Brezezinski, “More than Half of All CO2 Emissions Since 1751 Emitted in the Last 30 Years,” Institute for European Environmental Policy, April 29, 2020, ieep.edu; Adam Taylor, “COP27 Awash with Fossil Fuel Representatives, Research Shows,” Washington Post, November 10, 2022).

In terms of mitigation, it looked for a moment as if, after thirty years of climate negotiations, the UNFCCC would finally issue a statement indicating that all “unabated,” that is, without carbon capture and sequestration, fossil fuels had to be “phased out” in coming decades, not just coal. However, this was blocked in the final negotiated agreement. In terms of adaptation, the main success story was a last-minute agreement to provide a future loss and damage fund for the most vulnerable countries—though the Global North has yet to fulfill its previous promises of $100 billion in global climate financing agreed to in 2009 in Copenhagen (John Ainger et al., “COP27 Poised for Deal After Breakthrough on Climate Payments,” Bloomberg, November 19, 2022; Matthew Dalton, “Ukraine War, Energy Crisis Test COP27 Climate Talks,” Wall Street Journal, November 4, 2022).

All of this took place against a background of accelerating planetary disaster. In 2022, record heat waves spread across the Northern Hemisphere, particularly in the high and middle latitudes. In Pakistan, climate change induced record-breaking monsoon rainfall and melting glaciers, resulting in torrential floods extending over 30 percent of the country and affecting 33 million people. Africa experienced some of the worst effects of climate change in 2022, from deadly floods in Nigeria to extreme drought in Somalia.

From the standpoint of the Global South the dangers posed by climate change are stark, raising the question of imperialism in the Anthropocene. In the words of Prime Minister Mia Mottley of Barbados, speaking at COP27: “This world looks still too much like it did when it was part of an imperialist empire.” She went on to state:

We were the ones whose blood, sweat and tears financed the Industrial Revolution. Are we now to face double jeopardy by having to pay the cost as a result of those greenhouse gases from the Industrial Revolution? That is fundamentally unfair. We need to have a different approach, to allow grant-funded reconstruction grants going forward, in those countries that suffer from disaster. Unless that happens, we are going to see an increase in climate refugees. We know that by 2050, the world’s 21 million climate refugees today will become 1 billion. (Abayomi Azikiwe, “COP27 Deliberations Reaffirm Imperialist States as Main Obstacle to Ending Climate Change,” News Ghana, November 13, 2022, newsghana.com; Madeline Hislop, “Barbados PM Mia Mottley Tells COP27 There Will Be 1 Billion Climate Refugees by 2050,” Women’s Agenda, November 8, 2022, womensagenda.com)

A big issue for the Global South is that the countries of the Global North, led by the United States, have refused to accept responsibility for their full contributions to climate change. Utilizing a conception of the fair share of total carbon dioxide emissions within a climate budget determined by 350 ppm of carbon dioxide in the atmosphere (in accordance with the UN Intergovernmental Panel on Climate Change), it is possible to determine what countries have exceeded their fair per capita share. This can be done by subtracting their fair share based on population from their actual historical emissions, thus giving their excess emissions. By this measure, using 2015 data, the United States has been shown to be responsible for 40 percent of the world’s excess carbon dioxide emissions, while the Global North as a whole is responsible for 92 percent of the excess emissions. China and India have not yet exceeded their fair share of emissions and thus have zero excess emissions, which also applies to most of the Global South (Jason Hickel, “Quantifying National Responsibility for Climate Breakdown,” Lancet Planetary Health 4, no. 9 [September 2020]).

More recently, concern has been raised about the discrepancy between the official greenhouse gas emissions reported by countries to the UNFCCC and their real emissions. The Washington Post published a study in November 2022 in which they claimed that up to 23 percent of all annual greenhouse gas emissions, or some 13.3 billion metric tons in 2019, are not included in the data offered by countries (a figure similar to that in the UNFCCC 2022 Synthesis Report). Accounting of carbon emissions by countries in the UNFCCC process is complicated due to net-zero accounting, in which nations are allowed to deduct from their carbon emissions the effects of the growth of forests in absorbing carbon dioxide. Large nations such as the United States, Russia, and China thus each subtract more than a half billion tons of annual greenhouse gas emissions in this way. It is not surprising, then, that a majority of the undercounting of emissions, according to the Washington Post, occurs as a result of countries overcounting the carbon emissions absorbed by their forests/tree plantations, although countries also undercount methane emissions from oil and gas production. The Washington Post singles out nations in the Global South for undercounting emissions, making an example of Malaysia in this respect, whereas G7 countries—and indeed, the entire triad of the United States/Canada, Europe, and Japan—are assumed to be acting responsibly, with the exception that Australia is chided for not including the emissions caused by its wildfires (Chris Mooney et al., “Countries’ Climate Pledges Built on Flawed Data, Post Investigation Finds,” Washington Post, November 7, 2022; John Muyskens et al., “Measuring the Invisible: How the Post Did Its Global Emissions Analysis,” Washington Post, November 7, 2022; “Projected GHG Emissions Levels,” United Nations, NDC Synthesis Report, October 22, 2022, unfccc.int).

In its analysis, the Washington Post noted the well-known fact that the emissions from international transportation of people and goods by ship and air are not attributed to any country and are left out of the UNFCCC accounts. However, since it would point the finger at the United States in particular, the same newspaper fails to acknowledge military emissions, which, at the insistence of Washington from the very beginning of the UNFCCC process, are not included in emissions reporting by countries. Although there have been some minor reforms in the UNFCCC process in this respect, emissions associated with war preparation and war itself remain for the most part undisclosed. Such emission data, to the extent that it is provided at all, focuses mainly on the military’s direct use of fuel, not on the production of military goods, the consumption of products within the military-industrial complex, or the wider aspects of the military economy. Nor does it include emissions from actual wars. Information on the emissions of U.S. military bases around the world is not provided. Nonetheless, military emissions are estimated as constituting up to 5 percent of world greenhouse gas emissions, with the United States being by far the leader. If it were a nation, the Pentagon would have the highest per capita emissions in the world, estimated at 42 metric tons per employee/staff member (Mohammed Ali Rajaeifar et al., “Decarbonize the Military: Mandate Emissions Reporting,” Nature 611 [November 3, 2022]: 29–32).

All of this underscores the structural flaws in the UNFCCC process and reveals how the world is being propelled by the capitalist world economy into a planetary abyss. Carbon dioxide emissions have been growing at a rapid pace since the Industrial Revolution. However, the world has now reached the point where annual emissions must be cut by 50 percent globally by the end of the present decade, if the global carbon budget limiting the increase in global average temperature to below 1.5°C at the end of the century is not to be broken (IPCC, “The Evidence Is Clear: The Time for Action Is Now. We Can Halve Emissions by 2030,” April 4, 2022, unfccc.int). To avoid the question of capitalism in this context is to sign a death warrant for the planet as a safe home for humanity.