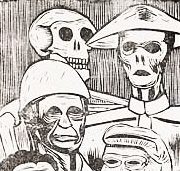 Can prisoners of war be effective antiwar voices? This question hovers over the book Dissenting POWs. Prisoner opposition to the Korean and Vietnam wars was easily dismissed as having been coerced by the enemy or the result of weak character. The authors update this dilemma by showing how antiwar Vietnam POWs were marginalized as trauma cases. Any future prisoners of war who dissent will have to work around the assumption that they are victims of post-traumatic stress disorder (PTSD).

The prisoners who opposed the Vietnam War are some of the least known such voices, and “Filling that void is the mission of this book” (14).

That is a tough goal. Such antiwar POW testimony was not so much erased from memory as never acknowledged in the first place.

The Nixon administration succeeded in making the end of the American war all about the prisoners, heroicizing them in the process. Torture and brave resistance dominated news and official reports, and the dissenters, if mentioned at all, were dismissed as “sadsack losers” (14). The authors here, Tom Wilber and Jerry Lembcke, note that the peace movement back in the United States largely ignored POW dissidents precisely because they were afraid that the prisoners would be discredited as having been brain- washed (90–91). As a result, “the POW story would be hijacked by the political right” (94). It is not clear that the antiwar movement could have prevented the hijack if it tried, since the POW is such a problematic figure; indeed, it is not clear that incarcerated voices can ever get much of a hearing, but while difficult to use in antiwar agitation, they cannot always be left out because sometimes the issue is forced by the government. During Richard Nixon’s presidency, in the later years of the Vietnam War era, one of the most effective retorts to the peace movement was “What about the POWs?”

In North Vietnam, the American prisoners were divided between pilots, who were officers, and a smaller number of enlisted ground soldiers captured in the South. The Senior Ranking Officers (SROs) set about trying to discipline the enlisted ground troops who were more likely to have known and sympathized with Vietnamese. The authors claim that dissent was “rooted in” the “structure of class hierarchy” (59), an interpretation that the book does not always maintain. The book blames SROs for trying to weaponize enlisted prisoners and dissuade them from even trivial cooperation with the captors. The authors’ opposition to the Vietnam War renders them uninterested in the whole idea of these POWs resisting their wartime enemy. The book is dedicated to two of the dissenting POWs, Al Riate and Bob Chenoweth. It seems that antiwar attitudes that had indeed seeped into enlisted men, especially later in the war, were also shared by many prisoners. The authors quote a Pentagon-friendly book (John Hubbell’s P.O.W. [1976]) saying that by 1971 thirty to fifty percent of prisoners were “disillusioned” or “cynical” about the war (26).

However, the text gives a limited picture of the dissenters themselves; it does not capture the look and feel of day-to-day life and protest in the Vietnamese prisons. Doing so would take many more interviews with ex-prisoners and stronger attention to atmosphere. While cynicism about the war was common, were there really only about a dozen active dissenters? The authors are not so clear about this, but they make a strong case that the eight-member Peace Committee within the North Vietnamese prison was motivated by conscience, not coercion or opportunism. Many of the eight continued to speak out after repatriation (75).

As part of its survey of POWs in society, the book delves into movie treatments. The antiwar prisoners were obscured by Hollywood, which preferred films on the POWs and “Missing in Action” (MIAs) who were supposedly left behind, or which dwelt on the trope of the deranged veteran….

…At 139 pages of text, Dissenting POWs is short enough to assign to classes. It is an accessible volume, despite a few lumpy sentences, like “The physicality of those representations of camp life in Indochina may have been metaphoric for the materiality of the Second World War’s ground war versus the ideological nature of the Cold War…” (86), but Dissenting POWs is still a brave book. POWs and MIAs of Vietnam have been the preserve of writers trying to convince readers of the nobility of the war, and this book is one of only a few that takes on that mythology. There may yet be another contest over the American captivity narrative. If nothing else, the 50th anniversary of the Paris Peace Accords is in 2023, so this volume is well-timed….