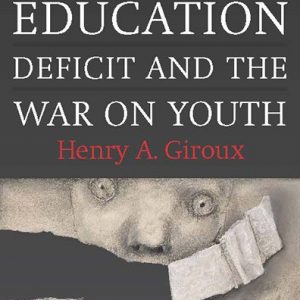 "A compelling critical discourse analyzing the present crisis of democracy. We can only hope it will become a manifesto, taken up by an informed and energized citizenry—ready to act."

America’s Education Deficit and the War on Youth

A stirring case that the education sphere is key to US democracy, and that attacks on it constitute an attack on youth and democracy, finds Ralph Graham-Leigh

Giroux asserts that a fundamental attack on democracy is currently occurring in the US, and urgent action is needed to defend democratic values against this assault. His view is that an examination of the education system provides evidence for this attack, and that education is itself both a key battleground, and the crucible in which the defence of democracy can be formed.

The book is a strong polemic and seems to be designed as a call to arms for those already on the left, rather than to win over new converts. Giroux unapologetically uses potentially controversial language, and starts from the position that readers are already comfortable with terms such as the ‘prison-industrial complex’, agree that the current American economic system is best described as ‘casino capitalism’, and that the financial industry is ‘a criminal and rogue industry’. Readers who do not agree with these starting points may well be deterred from continuing with the book.

The book argues that neoliberalism (or ‘Casino Capitalism’, as Giroux calls it) has been relentlessly promoted over the last forty years by the rich and powerful in society in order to entrench their power and enrich themselves further. In the US, the neoliberal undermining of democracy has combined with the growing militarisation of society and with religious fundamentalism to produce an unprecedented three-pronged assault against American democracy.

In Giroux’s view, neoliberalism undermines democracy because proper functioning of democratic institutions requires an engaged, well-informed citizenry and public spaces, whether physical or virtual, where free discourse can occur. Neoliberalism counteracts this in two ways. Firstly, neoliberalism privatises physical public spaces and, by defining citizens solely as customers, people exist in a relentlessly competitive and individualistic environment. They have no responsibilities to their fellows or any role beyond materialistic consumption. Secondly, promotion of neoliberalism relies on three techniques, which are less effective when used against a well-informed citizenry. Therefore the interests of those promoting neoliberalism are directly contrary to the interests of a well-functioning democracy…

Read the entire review on Counterfire