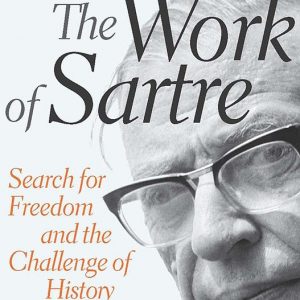 "Not only makes a powerful case for him as one of the great philosophers of the twentieth century, but also underlines how the problems and commitments that animated Sartre make him a vital figure of continuing importance."

First published in 1979, this book met acclaim as a doubly important work of radical philosophy. Its subject, Jean-Paul Sartre, was among the twentieth century’s most controversial philosophers; its author, István Mészáros, was himself establishing a reputation for contributions to the Marxian tradition. In this updated and expanded volume, Mészáros examines the manifold aspects of Sartre’s legacy. Mészáros has a strong connection with Sartre, and has clearly explored and struggled with his ideas extensively, concludes Miranda Nell.

The Work of Sartre: Search for Freedom and the Challenge of History. István Mészáros. Monthly Review Press. October 2012.

Although Jean-Paul Sartre was a popular and influential philosopher, he has not become as common a topic for serious scholarship as some of his peers. While Husserl and Heidegger are engines of continental thought, and Merleau-Ponty has a sizable following, Sartre tends to be used in introductory courses more than dissertations. Nonetheless, many philosophers do consider his work important and look forward to new insights about his legacy. The Work of Sartre promises to be such a book.

The first edition of this book was published in 1979, even before Sartre’s death, with the intention of a second volume to follow. Volume Two was never completed, but this expanded and updated edition includes an additional section under the subtitle “The Challenge of History” which fulfils that role, if with greater brevity than originally expected. The angle of the book is more political than metaphysical, and the final section is focused specifically on Sartre’s Marxian turn. This is done with a general sympathy for the conclusions, from the perspective that the earlier works have to be understood as initial attempts at the same basic issue, not so much rejected as reconfigured.

Istvan Mészáros came from Hungary and made Sartre’s acquaintance shortly after the Hungarian revolution, with a particular interest in clearing up some misunderstanding regarding the Hungarian philosopher Gyorgy Lukacs. Mészáros believed that Sartre and Lukacs were actually quite similarly-minded and would benefit from a dialogue. While the promised interchange never took place (perhaps due to governmental interventions in the mail), Sartre was informed and duly apologized for earlier statements, in which he had accused Lukacs of actively supporting Janos Kadar’s Soviet-enforced government, when rather Lukacs had endured house arrest, exile, and personal suffering to stay true to the revolutionary state he believed in.

The influence of this background is evident throughout the book, as the interest in Sartre’s work is more than theoretical inquiry. He is presented as one of the few thinkers of his generation who maintains interest in a true re-imagining of society rather than being deflated by the failures of the early 20th century…

Read the entire review in LSE Review of Books