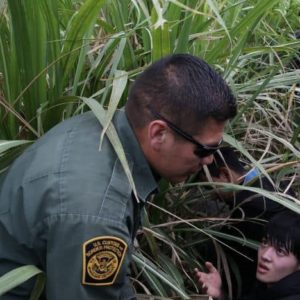 By David Wilson, author, with Jane Guskin, of The Politics of Immigration: Questions and Answers (Second Edition)

There’s a crisis on the imaginary line that separates the United States from Mexico, but it’s not the one politicians and media outlets have been talking about.

Earlier this year, the US political class was focused on a supposed “surge” in migration and on serious — but not unprecedented — failures in the treatment of unaccompanied minors. This distracted attention from two far more serious issues: the Trump administration’s misnamed Migrant Protection Protocols (MPP), now discontinued, and the ongoing use of the US health code’s Title 42 to exclude asylum seekers from entering the country.

With these two measures, the executive branch all but dismantled the nation’s asylum system, creating a humanitarian catastrophe on the Mexican side of the southwestern border, where tens of thousands of asylum seekers have been forced to live in danger from disease and criminal gangs. But the executive’s assault on asylum seekers has also created a crisis for people on the US side of the border.

The US asylum system is mandated by a federal law, the Refugee Act of 1980, and by an international treaty, the 1967 Protocol Relating to the Status of Refugees.

The violation of asylum seekers’ rights over the past three years demonstrates how easily a president can ignore and even defy the law — especially when the victims are poor or marginalized and not enough of us speak out…..

As for the politicians, they’ve been better at signing indignant letters than taking action. Kamala Harris joined in the letters against MPP and the Title 42 policy when she was a senator; there’s no evidence that she’s trying to stop abuses by the executive branch now that she’s vice president.

Many centrist policymakers have also kept quiet, citing the “political climate.” “They are afraid of the ‘bad publicity’ from Republicans saying, ‘Biden opened the border,’” according to Sue Kenney-Pfalzer, Border and Asylum Network director at HIAS, a nonprofit that aids refugees and asylum seekers. Andrew Selee, president of the nonpartisan Migration Policy Institute, seems to favor that approach. “Is Title 42 bad policy? Yes,” he said in April. “Is it a necessary instrument to get to better policy? Possibly.”

Read the full article at Jacobin

Repeated attempts at a coup in Venezuela have failed, an an extraordinary cost (EXCERPT: Extraordinary Threat)
Listen: Why the right attacks Critical Race Theory, without even knowing what it is (“The Analysis” brings Gerald Horne back for an interview)