“Kohei Saito’s book shows us how Karl Marx evolved as an ecological thinker. It is a pioneering scrutiny of the evolution of ideas, the genealogy of terms, lines of debates and kinds of evidence, from the 1840s to about 1870. The book started as a German doctoral thesis, grounded in hitherto unpublished notebooks by Marx, but also drawing on Saito’s wide erudition. Putting paid to one set of debates, the book generates new ones….”

Read the review at People and Nature: Some socialist ideas about society, the earth and their interaction 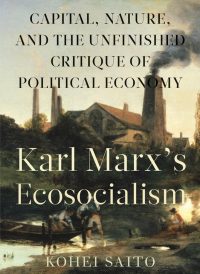 From the Square: Michael Joseph Roberto talks about “The Coming of the American Behemoth”
Regarding ecological imperialism–Freedom Socialist reviews “Karl Marx’s Ecosocialism”