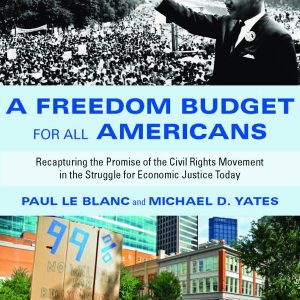 "An excellent and long overdue chronicle of the Freedom Budget ... a wondrous story told with compassion and clarity."

A Freedom Budget for All Americans: Recapturing the Promise of the Civil Rights Movement in the Struggle for Economic Justice Today

Le Blanc (history, La Roche Coll.; Marx, Lenin, and the Revolutionary Experience) and Yates (assoc. editor, Monthly Review; Why Unions Matter) stress that the American civil rights struggle was part of a broader fight for economic justice. Socialist intellectuals (e.g., Bayard Rustin) and radical labor leaders (e.g., A. Philip Randolph) were trusted advisers and allies of Martin Luther King Jr. Their social-democratic economic ideas were embodied in the “Freedom Budget,” a 1965 document that called for the elimination of poverty by 1976 through programs to create full employment, eliminate slums, and ensure a minimum standard of living for all. Le Blanc and Yates contend that President Johnson’s Great Society and War on Poverty were merely Band-Aids applied to systemic economic racism and oppression; furthermore, the authors remind us, the programs were neglected when Johnson instead turned his attention to the expansion of the war in Vietnam. The book ends with a proposed updated version of the Freedom Budget; the budget includes federal programs for full employment, a restructuring of education and job-training systems, and more. VERDICT Readers may disagree with the socialist and progressive views that underlie the book, but it is invaluable for restating the influence of the American left on King’s views and enriching the historical record.—Duncan Stewart, Univ. of Iowa Libs., Iowa City