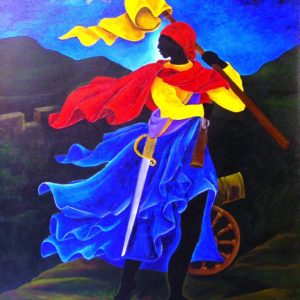 Marie Jeanne Lamartiniere, the Haitian revolutionary who fought at Crête-à-Pierrot in 1802. Painting by Patricia Brintle (2012)

As Professor Gerald Horne’s remarks made clear, Haiti’s anti-slavery efforts contributed to the freedom struggles of all of the laborers and toilers throughout the Americas:

My brief remarks will mostly be about slavery. That is to say, in the first instance, I will be laying the foundation for how and why Black people from Africa wound up in the Americas.

In the late 18th century, two profound processes unfolded in the Americas that were to have consequences for the entire hemisphere. First, in 1776, you had a revolt led by slave owners driven by the lust for indigenous land. They also felt the desire to continue and accelerate the enslavement of Africans, which they had thought might be in jeopardy because of a growing abolitionist movement – not only in the Caribbean, but also in London, itself. Second, another process began unfolding in 1791, culminating in 1804 with the Haitian Revolution. It was driven by anti-slavery.

Needless to say, the newly-born United States of America was quite hostile to revolutionary Haiti and indeed, in 1844, the US aligned with forces in a sizable portion of the island to engineer a split that led to the creation of the Dominican Republic. Haiti, on the other hand, sponsored abolitionists and anti-slavery movements. The efforts of Haiti compelled London to abandon the slave trade by 1807 and slavery itself by 1833. Interestingly, Texas (where I am now sitting) seceded from Mexico in 1836 on pro-slavery grounds because Mexico had moved to abolish slavery in the late 1820s under the leadership of Vicente Guerrero, a president of African descent.

After Texas successfully seceded from Mexico on pro-slavery grounds, Haiti, along with an international abolitionist movement, put so much pressure on independent Texas it decided to join the United States in 1845, where it still resides. For Texas, it was an attempt to continue its slave trading operations. During its brief existence as an independent nation, Texas was a major slave trading force with slave ships flying its flag found off the coasts of Angola, Brazil, and Cuba.

Mexico, it is fair to say, was probably the major victim of U.S. expansionism — not least because Mexico offered a refuge to enslaved Africans fleeing not only the United States, but from the Caribbean as well. As a result, we saw the United States wage war against Mexico in 1846, which led to the United States seizing a sizable portion of Mexican land, including California, which today is the wealthiest and most populous state in the United States of America and by some measures, ranks as the fifth-largest economy on planet earth. Thereafter, the United States continued to try to seize Mexican territory, often with the help of traitorous Mexican forces.

Brazil, too, was also a major victim of Washington. U.S. slave traders are largely responsible for the fact that Brazil has the largest Black population outside of West Africa itself. In the 1840s US-flagged ships could be found off the coast of Mozambique, off the coast of Angola, seizing and manacling Africans and dragging them across the Atlantic to toil in Brazil. There were powerful forces in Washington as well who wanted to execute in Brazil what they had executed in Mexico. That is to say, they had this scheme that suggested that the Amazon River was in some ways an oceanographic extension of the Mississippi River. By this logic, the United States should seize the Amazon River and indeed expel a good deal of the population of the United States of America to be enslaved workers in the Amazon River valley.

Fortunately, that plan did not succeed. I should also say that all the while these diabolical schemes were taking place, it was Haiti, through its diplomatic missions, particularly in London, that was plotting against the United States…

Haiti stood tall as the first independent Black republic campaigning on our behalf. It is fair to say that the Haitian Revolution was not only a victory for the millions of enslaved Africans in the Americas. The Haitian Revolution was also a victory for all working class people because the existence of slavery drove down the wages and working/living standards of all people who sold their labor for a living….