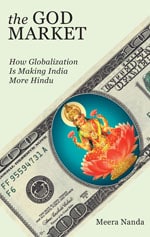 We need to be ready to confront Hinduism. And here’s why: India is on track to become a significant world power within thirty years, and Hindu nationalism is on the rise there, not in decline. There are even well-funded efforts now to spread Hinduism into other countries. Hindu nationalism, Hindu supremacism, Hindu fundamentalism, Hindu terrorism, and Hindu evangelism are terms once thought to be oxymoronic but now are a reality. It’s not an urgent threat in America, to be sure (Hinduism’s numbers and influence are microscopic compared to the more pressing problems created by conservative and mainstream Christianity; and, among external threats, Islam), but the power and influence of India, economically and politically, is of growing significance, and its policies are increasingly influenced by Hinduism. We’d do well to keep our eye on it.

There is another reason to pay attention. The secularization thesis is in trouble lately. It turns out, the idea that modernization inevitably increases secularization (and a corresponding decline of religion) is false. It has been based on the rather exceptional examples of Europe, Japan, Canada, and Australia (and now, only very recently, the U.S., which for the first time is showing the start of similar demographic trends). The rest of the world is going the other direction, with increasing (albeit changing) religiosity, hand-in-hand with increased modernization and industrialization. This is the danger of focusing only on the first world as if it were normative. When we look at India, for example, we see many very important parallels with the path of religion in the U.S. (up until now), but also many important differences. Any theory of secularization (how inevitable it is, or how to advance it) must be based on the evidence available from other religious and cultural contexts. India is an ideal example of that.

I would not have said or thought any of the above had I not been lucky enough to be asked to read and blurb the American edition of Meera Nanda’s book The God Market: How Globalization Is Making India More Hindu (2011, revised edition with a new introduction; originally published in India in 2009). Meera Nanda is a noted philosopher of science in India who (ironically, given that she’s an atheist) was a recipient of a John Templeton Foundation Fellowship to research and write on secularization in India (or more precisely, on the reception of scientific thinking in India, what Indians call “scientific temper,” set forth as a national goal in India’s constitution). Her main project (which will be published as Tryst with Destiny: Scientific Temper and Secularization in India) is near completion. But she realized she could not develop that without first publishing her preliminary findings on the state of secularism in India, as her findings were overturning the apple cart of traditional secularization theories, and as a patriotic Indian and champion of science and reason she is greatly concerned about this.

I provided the publisher with this official reaction to her book, which you will now find gracing its back cover:

Nanda reveals that rising secularization is not quite triumphant, but in fact matched by a rising tide of religiosity. India is one of the largest and most productive countries in the world, it’s high time we paid attention to the religious trends that are consuming it. [The God Market provides] an excellent tour of just what is going on, and how it resembles (and differs from) the American and European experience with religious nationalism and fundamentalism. She explains what this means for the contemporary secularization thesis, but also what it means for India and the world. Hinduism is on the rise. And we will have to confront it. And for that, we have to understand it. Nanda provides the ideal guide.

Among the things she discovers (and documents) is that Hinduism is on the rise (not decline) among the large and successful middle class in India, and among the rich, reversing the predictions of the standard secularization thesis that greater security removes the need for religion. Reduced existential anxiety (reduced fears of starvation, injury, disease, bankruptcy, loss of employment, terrorist attacks, industrial accidents, crime, poverty), produced by secular governments replacing religion in meeting these needs (from improved legal systems to public sanitation and safety and national security, and such things as unemployment and medical insurance) is supposed to reduce religiosity. But that isn’t always so. Nor is it ever the whole story.

Although it is true that (in many documented cases) decreased existential anxiety often reduces the proportion of religiosity in a society, religiosity is not thereby eliminated but remains rather abundant. For example, even 1 in 3 Norwegians believes in God, and depending on how one defines terms, the real number is closer to 2 in 3; only 1 in 6 Norwegians identifies as what we would call an atheist (only 17% “do not believe there is any sort of spirit, God, or life force”), and we can dink this up to only 1 in 5 if you include agnostics (by adding in the 4% who “don’t know”). Moreover, even this modest reduction does not always occur in every society. Because religion itself can create existential anxieties that it then exploits. This is a notable feature of religion also explored by Hector Avalos in his new and intriguing book Fighting Words: The Origins of Religious Violence, which challenges the claim that violence “actually” has other causes such as resource disparities, by showing that those disparities are often created by religion (in fact sometimes are the wholly fictional creations of religion).

An example of a fabricated existential anxiety is fear of one’s fate in the afterlife. But one can also gin up anxiety over the trivia of human life, too, from romantic success to job promotions to income security, which religion can then step in and offer solutions to, literally “marketing” its product using the same techniques employed by commercial industry to sell secular goods and services. Key to this tactic being successful is suppression of skeptical and scientific thinking (by, for example, controlling or watering down the education system). Religion can even be used for alleviating the worries of the successful by providing them a way to feel okay about the enormous income disparities in India, using religious narratives about how everyone is getting what they deserve…