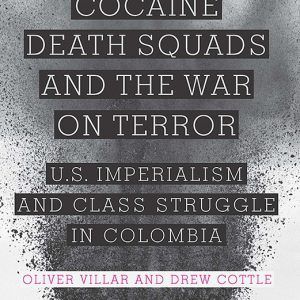 "Exceedingly well researched and written, this book lays bare the putrid essence of an important component of U.S. imperialism in its current form."

Cocaine, Death Squads, and the War on Terror

In March of 2009, my friend Amelia Opalinska and I hitchhiked around Colombia. Despite our parents’ conviction that such behavior was conducive to immediate kidnapping by the Revolutionary Armed Forces of Colombia (FARC), the greatest challenge we ultimately faced was the reluctance of motorists to pick us up.

After being informed by a compassionate passerby that this reluctance was probably a result of recent robbery schemes involving female hitchhikers, we attempted to render our appearance as innocuous as possible by designing colorful placards to indicate our intended destination and decorating them with rainbows and flowers. When this did not work, we drew stop signs in red marker and positioned ourselves in the middle of the road, which only caused vehicles to swerve around us.

Appeals to police at anti-narcotics checkpoints for assistance in procuring rides meanwhile proved even less effective, as citizens appeared unconvinced that the representatives of the state had their well-being at heart.

Amelia and I eventually arrived to the department of Putumayo in southern Colombia, where our activities included attending a dance at an outdoor pavilion in the village of Umbria. Decorative signage in the village consisted of USAID advertisements reminding the population not to grow coca and fliers distributed by the Águilas Negras (Black Eagles) threatening to kill prostitutes and anyone else who went outside after 10 PM. The Águilas Negras are the successor group to the superficially demobilized paramilitary organization the United Self-Defense Forces of Colombia (AUC), historical partner of the Colombian state.

We first learned of the fliers from Milber, an 18-year-old former FARC conscript and dance attendee who had recently returned to Umbria after a four-year stint in the jungle. Although quick to blame the FARC for his unfamiliarity with popular dance forms—as well as for the heartache suffered by his mother, who had witnessed her son’s removal from the family residence at gunpoint—Milber harbored no illusions as to the imperial utility of casting the guerrilla outfit in the role of narco-terrorist enemy. Drawing parallels with other resource-rich regions of the world, he reasoned that Saddam Hussein had also served as a useful menace and facilitator of U.S. corporate profit.

Refuting USAID’s seemingly charitable concern for the cultivation of morally upstanding crops, the authors provide a succinct but detailed history of the United States’ alliances with drug traffickers and paramilitaries and its contributions to Colombian state repression and the institutionalization of the cocaine industry. Notable beneficiaries of the malevolent nexus have included Lockheed Martin and DynCorp, a private mercenary firm which Villar and Cottle note “is the same private company that the Reagan-Bush administration used to run arms and drugs during the cocaine decade [of the 1980s].”

The book’s argument that “[t]he war on drugs and terror in Colombia is in fact a war for the control of the cocaine trade—in a system of imperial domination—by means of state-sponsored terror” is summarized in the conclusion as follows: “This war as decreed by successive Washington administrations was, is, and remains its opposites: a war for drugs and a war of terror.”

Of course, such assessments are not easily grafted onto the consciousness of a populace conditioned to impute noble—or at least sincere and non-paradoxical—motives to U.S. projects abroad. If the U.S. is to attain the minimum amount of self-awareness necessary for any society that considers itself free, the proliferation of studies like Villar and Cottle’s is a prerequisite.

The scholars explain that, starting in the late 1980s, “the Colombian state commenced efforts to manufacture its image as a defender of democracy at war with narco-terrorists,” enlisting the talents of U.S. public relations firm the Sawyer/Miller Group. The firm earned nearly a million dollars in the first six months of 1991 for its efforts, which included “us[ing] the American press to disseminate Colombian government propaganda, with the routine production of pamphlets, letters to editors signed by Colombian officials, and advertisements placed in the New York Times and Washington Post.”

As tends to happen with even the most diligently manufactured threats, however, the traitorous truth has consistently failed to rise to the occasion, and “in 2001 Colombian intelligence estimated that [the] FARC controlled less than 2.5 percent of Colombia’s cocaine exports, while the AUC controlled 40 percent, not counting the narco-bourgeoisie [the updated incarnation of the Colombian oligarchy] as a whole.”

The exclusive assignment of the “terrorist” label to the FARC is meanwhile not entirely congruent with the fact that it was the Colombian military and not the guerrillas that resuscitated the Vietnam-era collective punishment method of “draining the sea to kill the fish.” According to Villar and Cottle, “[h]uman rights groups contend that the AUC and Colombian armed forces have been responsible for approximately 90 to 95 percent of all politically-motivated killings, which have included massacres by chainsaw and other methods designed to terrorize the campesinos in rural areas under FARC control.”

As for the U.S. request in the 1980s for the extradition of Medellín cartel kingpin Pablo Escobar for “conspiring to introduce cocaine into the United States via Nicaragua,” this allegation might have just as aptly been levied against other characters such as U.S. Marine Lt. Col. Oliver North, whose activity did not result in a collaborative assassination effort by the CIA, AUC, Cali Cartel, and Colombian police….