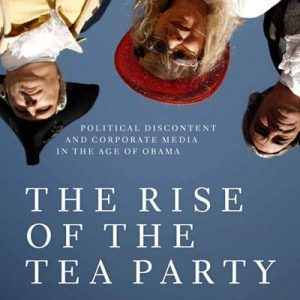 The Rise Of The Tea Party: Political Discontent & Corporate Media in the Age of Obama

The ‘Tea Party’ comes in for close scrutiny in a new book by Anthony DiMaggio, which exposes that faction’s pretensions to be a real social movement as false, dominated as it is from the top-down by established right-wing forces, argues William Alderson.

The Tea Party has been routinely presented in the US as an independent grass-roots movement which represents a widespread rebellion demanding that the Republican Party move to the right. In fact, such a combination is so contradictory as to be virtually impossible, and so it is unsurprising that Anthony DiMaggio confirms that the Tea Party is the opposite of this. As he shows, it is actually an attempt, organised by established Republican leaders, to re-brand the Republican Party and make its more extreme policies appear popular.

DiMaggio analyses the nature of the organisation of the Tea Party, the source of its political and financial support, the role of the media in constructing the Tea Party’s image, and the way that its existence influenced the debate over reform of the healthcare system. What he reveals is that the Tea Party has virtually no base, and is unable to draw on a dozen activists to build for a protest even in its heartland around Chicago. Meetings are dominated by Republican politicians and candidates for election, with little time provided for audience involvement in debate, planning or organisation. Its local activists, he explains, ‘are fundamentally ignorant as to what constitutes a social movement’ (p.100).

Far from being independent, the Tea Party includes among its key political supporters such well established Republican leaders as Dick Armey, former majority leader in the House of Representatives, and Sarah Palin, a vice-presidential candidate in the 2008 election. In a further hypocritical twist, 18 of the 29 Republicans in the Tea Party Caucus in late 2010 had been politicians long enough to have voted in favour of the Gramm-Leach-Bliley Act in 1999 and the Commodity Futures Modernization Act in 2000. The deregulation supported by these acts led to the very economic crisis in the banking sector which the Tea Party condemns (pp.57-8).

Financial support for the Tea Party has been substantial. The average amount contributed to the campaign of candidates for the House of Representatives in 2010 was $805,583, and for candidates to the Senate, $9,603,091. The source of these funds is also interesting, with the health and insurance sector among the top ten contributors in around 94% of campaigns, providing an average of $88,878 per Tea Party candidate (pp.64-5).

With so invisible a popular base and so great an involvement with the establishment for political and financial support, the Tea Party relied on the media to create in the public’s mind the wholly false image of it as a social movement. The comparisons DiMaggio makes between coverage of the Tea Party and genuine social movements are particularly striking. To take just one example, four key media outlets described the 2010 Tea Party marches (turn-out up to 200,000) as a movement in 106 articles, whereas only 48 articles described the global anti-war protests of 2003 (turn-out 6-10 million) as a movement (p.114).

Having shown how Republican influence over the media could lead to the public being deceived about the Tea Party, DiMaggio goes on to show how this device was used to manipulate public opinion on the issue of healthcare by controlling what was discussed. On the one hand, this involved shifting the debate away from specifics (where most people agreed with the proposals) and onto generalities (which could be made confusing). On the other hand, it involved inventing threats. For example, in July 2009 Sarah Palin claimed, without justification, that the Democrats planned to set up ‘death panels’ which would decide who would be treated. As a result, the media focussed on this spurious issue and ignored the tens of thousands of Americans already dying due to lack of access to healthcare (p.164). In fact, between July and September 2009, the proportion of people who were following the healthcare debate closely and found it hard to understand actually increased to over 60% (p.205)!…

Read the entire review on Counterfire