Dear Reader, we make this and other articles available for free online to serve those unable to afford or access the print edition of Monthly Review. If you read the magazine online and can afford a print subscription, we hope you will consider purchasing one. Please visit the MR store for subscription options. Thank you very much. —Eds.
Notes from the Editors
by The Editors
(Jul 01, 2015)
Topics: Imperialism Movements War Places: Asia Bolivia Global Vietnam 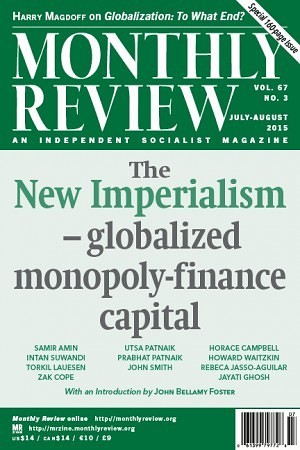 May’s Review of the Month, “Honor the Vietnamese, Not Those Who Killed Them” by MR Associate Editor Michael D. Yates, has elicited many responses. One writer said that Yates had written the best, but perhaps the first, Marxist analysis of the war. Another praised Monthly Review for having the courage to publish this article. Still a third predicted that in the more distant future, humanity would embrace the essay’s judgment and honor the Vietnamese people for their heroic struggle against the overwhelming might of the U.S. military.

In light of these comments, as well as the subject matter of this double issue of Monthly Review on imperialism, we thought it might be worthwhile to say something more about what the Vietnamese themselves naturally enough call the American War, with an eye toward drawing important lessons useful for contemporary radicals.

First, the war was clearly one of imperial aggression. Although President Eisenhower spoke of the global importance of Vietnam’s raw materials—such as tin, tungsten, and rubber—raw material imperialism was not a significant reason why the United States wreaked such havoc on a poor, peasant nation. Vietnam’s resources were not critical to the U.S. or any other rich capitalist nation’s economy. Rather, what the United States saw at stake in Vietnam was the challenge the Vietnamese presented to the imperial power of the world’s greatest capitalist nation. The Chinese Communists had seized power in 1949, followed by Cuba, while radical nationalism had arisen throughout the global South as former colonies demanded independence, both political and economic. The United States drew a line in Vietnam and said, in effect, that this small peasant nation would not be permitted its freedom. And it certainly would not be allowed to become socialist. What followed was a savage onslaught, an orgy of organized and calculated murder. Nothing mattered to the United States except the annihilation of the Vietnamese Revolution. President Lyndon Johnson was willing to abandon his commitment to black civil rights, the one thing that would have made him one of the country’s greatest presidents, to pursue the war to the end, undertaking anything to see to it that Vietnam did not “fall” to the Communists. (On the domestic consequences of the Johnson administration’s choice of war over civil rights see Paul Le Blanc and Michael D. Yates, A Freedom Budget for All Americans [Monthly Review Press, 2013].)

What we must learn from this is that, in the end, imperialism is enforced from the barrel of a gun. Just as the exploitation of labor by capital necessitates the timely use of the police power of the state, so too the domination of poor countries by rich ones requires a willingness to use blunt force. Today, the market secures super profits from the labor of workers in poor nations, but underlying the market is always the threat of violence. The United States does not have military bases around the globe for any other purpose but to let the rest of the world know that it will resort to deadly force when it deems it necessary. It will destroy a nation’s land and culture, if for no other reason than to send a lesson to one and all of what might be in store for them if they defy its will. And if U.S. power has diminished, as some now say it has, other mechanisms of violence will have to fill the gap.

Second, what the War in Vietnam teaches us is that resistance to imperialism is tantamount to resistance to capitalism, and that this is an extraordinarily difficult thing to do. Success is never guaranteed and not, in most cases, likely at all. The Vietnamese revolutionaries set the standard for resistance, implementing brilliant military and political tactics. Yet, despite their triumph, the Vietnamese after the war were faced with a ravaged landscape, a deeply scarred population, and continued harsh and heartless economic and political pressures from the United States and its allies. Under such circumstances, full democracy and a deepening of socialist culture is difficult to imagine, much less institute. Noam Chomsky has suggested that, in fact, the United States won the war. And given that Vietnam today, forty years after the reunification of the country, is increasingly prey to multinational corporations seeking cheap labor, there is no doubt something to be said for this point of view. But in any such historical assessment we should be careful not to deny the genuine victory the Vietnamese won in their valiant fight for freedom and for a better, more humane, and egalitarian society. Although Vietnam has since been swept up like other poor countries in a tide of capitalist globalization—losing much of its ability to resist such trends following the demise of the USSR and China’s reintegration into the world market—it continues in many ways to chart an independent course. Moreover, important positive legacies of Vietnam’s great war for liberation remain, such as social ownership of land.

If, nonetheless, capital over the last four decades was able to deprive the Vietnamese of many of the fruits of their great victory—the most heroic of the last half century—what hope is there for future struggles to supersede capitalism and the imperialism that is its lifeblood? If the focus of revolutionary thought and action is one nation-state or a single issue, then the truth is of course “not much.” If it is conceded that sometimes we should support “humanitarian intervention,” then the reality is “not much.” If we adopt the view that saving capitalism from itself is necessary so that space can be opened for future revolts, then the answer is “not much.” If we say that the efforts now underway to save the planet from multiple catastrophes are little more than fearmongering that ignores the class struggle, then the answer is “not much.” But if we take to heart the exhortations of revolutionaries like our Monthly Review comrades, István Mészáros and Michael Lebowitz, that capitalism consists of a set of deeply interconnected relationships, none of which can be considered in isolation from any other, and that all of the system’s contradictions must be relentlessly attacked together, then the answer is, “there is hope.” We cannot, of course, remove ourselves from any and all attempts to improve the lives of workers and peasants. However, there is no reason why we cannot connect, for example, the fight for higher wages and less-stressful working conditions to the fight against U.S. imperialism, and demand that the theft of land from peasants that it facilitates must end, that immigrant workers must have full political rights wherever they are compelled by necessity to settle. We must tease out the complex ways in which whatever matter concerns us also affects and is affected by multiple other problems. We must build alliances, and broaden and deepen the struggle at all times. And we must place socialism plainly and proudly on our banners, right now and not in some indefinite future. There would be no better way to honor the Vietnamese.

And just as we honor the Vietnamese who courageously fought in their war of liberation, we would also like to take this opportunity to honor those in the United States and throughout the world, including the Vietnam Veterans Against the War, who chose to resist the War in Vietnam, in an act of international human solidarity.

Today, forty years after the end of the Vietnam War, the United States is at war in the Middle East, in what is now being called in U.S. foreign policy circles (see the introduction to this issue) the “New Thirty Years’ War.” In the three years following the U.S. invasion of Iraq in 2003, between 600,000 and a million Iraqis were killed and another five million displaced (Bloomberg School of Public Health, Johns Hopkins University, “The Human Cost of the War in Iraq: A Mortality Study, 2002–2006,” http://web.mit.edu; MIT Center for International Studies, “The Iraq War: The Human Cost,” http://web.mit.edu/humancostiraq). The destruction throughout the entire region has led to continual, internecine warfare, with the United States intervening in multiple countries simultaneously, and engaging in a constant stream of drone assassinations, bombings, and tortures.

Yet, simply focusing on wars is not enough if we are to understand imperialism. In order to comprehend the geopolitical causes of the New Thirty Years’ War in the Middle East, its connection to the Vietnam War that ended forty years ago, and the relation of this to conflicts (economic, political, cultural, and military) between the U.S.-led imperial triad (the United States/Canada, Western Europe, and Japan) and vast sections of the world’s population today, it is necessary to reconstruct the classical Marxian political-economic theory of imperialism for our time. This special issue on “The New Imperialism of Globalized Monopoly-Finance Capital” is intended as a first step in that direction.

In March 2015, Gar Alperovitz, James Gustave Speth, and Joe Guinan issued The Next System Project: New Political-Economic Possibilities for the 21st Century, NSP Report 1, which can be accessed online at http://thenextsystem.org. The report provides ideas that will interest many MR readers on the question of the next system, to replace capitalism. We were pleased to note that the contributions of a number of recent MR authors were noted in the report, including those of Marta Harnecker and Michael Lebowitz, authors, respectively, of A World to Build: New Paths toward Twenty-First Century Socialism (Monthly Review Press, 2015) and The Socialist Alternative (Monthly Review Press, 2010). For information on these books and to purchase them, go to https://monthlyreview.org/press.

A thematic issue of Latin American Perspectives in May 2015 is entitled “The Resurgence of Collective Memory, Truth, and Justice Mobilizations in Latin America.” The collection outlines the process of remembering and addressing the nightmare of right-wing torture and murder that overwhelmed Chile, Argentina, Colombia, Brazil, Uruguay, Bolivia, and Guatemala in the latter part of the twentieth century. It is a useful aid to any student of today’s left movements in Latin America—a necessary recollection of the horror from which they emerged. Missing, unfortunately, is reference to the deliberate U.S. policy of intervention that generated the continental arc of atrocity, from Vernon Walters in Brazil in the 1960s to Clinton’s Plan Colombia in the 1990s. This task of “Memory, Truth, and Justice” remains to the addressed.