Dear Reader, we make this and other articles available for free online to serve those unable to afford or access the print edition of Monthly Review. If you read the magazine online and can afford a print subscription, we hope you will consider purchasing one. Please visit the MR store for subscription options. Thank you very much. —Eds.
by James M. Cypher
(Dec 01, 2017)
Topics: History Political Economy Places: Americas United States 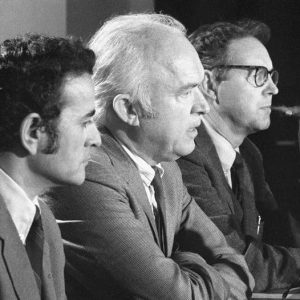 Douglas Dowd, right, at a news conference in Chicago before a march against the Vietnam War in 1969 with Sidney Peck, left, and Stewart Meacham. Credit Associated Press.

James M. Cypher is a professor of economics in the doctoral program in Development Studies at Universidad Autónoma de Zacatecas, Mexico.

Longtime readers of Monthly Review would likely agree that the world is a colder, darker place without Doug Dowd. His writings appeared in what seemed like an endless stream, beginning in 1950 with an essay on economic development—“Two-Thirds of the World” in the Antioch Review—and culminating with the prescient At the Cliff’s Edge (2007).

Dowd was deeply affected by the protracted depression of the 1930s, living in San Francisco at a time when it was widely known as a “union town.” He came of age during a key period of ascendant labor power that climaxed with a general strike in 1934, when, with approximately half the city’s stevedores languishing on relief, the International Longshoremen’s Association struck against the labor shape-up, ultimately shutting down all west coast ports. Dowd later said he “came to life” through that strike. 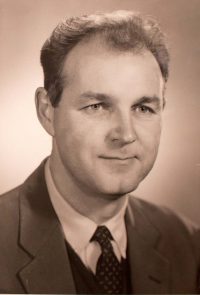 In 1941, to avoid the draft and the infantry, Dowd signed up for pilot training—just two days prior to the Pearl Harbor attack. He spent four eternal years in the Pacific Theater, returning to his beloved San Francisco only in December 1945. While Doug spoke only rarely and lightheartedly of his military service, his occasional mentions of life during the war conveyed a deep truth: years of facing combat death and the ever-present risks of piloting military aircraft had made him fearless. Bold to a fault, he was as far from the stereotypical timid academic as one could be. That he eventually amassed an FBI file of some 2,500 pages never deterred him for an instant.

Early on, that file had labelled Dowd a “premature anti-fascist.” Indeed he was. I have little doubt that if he were here now, Dowd would be carefully analyzing and confronting resurfacing fascist tendencies in the United States and elsewhere. Among Doug’s countless friends was Bertram Gross, author of Friendly Fascism (1980), and he took Gross’s hypotheses quite seriously, as he did those of Thorstein Veblen. The dark side of U.S. patriotism and national identity, so perceptively presented by Veblen, was deeply etched into Dowd’s detailed, always evolving diagnosis of the political-economic dynamics of the United States. At the turn of the twentieth century, Veblen warned that the United States risked sliding into a structural pathology wherein the “predatory animus” dominated, while state power was consolidated and reproduced through unthinking obeisance to ritual, rank, passivity, and patriotism. In a word, Veblen highlighted the country’s drift toward militarism—a theme Dowd always kept front and center.

After the war, thanks to his own talents and modest military benefits, Dowd went to the University of California at Berkeley to earn advanced degrees in economics. There the underappreciated Robert Brady, author of The Spirit and Structure of German Fascism (1937) and Business as a System of Power (1943), was his Ph.D. advisor. From Berkeley Dowd went directly to Cornell, where he quickly rose through the departmental ranks, establishing himself as a brilliant lecturer while publishing articles in mainstream economics journals.

As the deadening 1950s passed into the white-hot 1960s, Dowd seemed to be everywhere there was protest and insurrection, both at home and abroad—and sometimes tailed by the CIA. He became deeply committed to the civil rights movement, risking life and limb in the deep South during the Freedom Summer of 1964. As the U.S. war in Vietnam heated up, Dowd threw his talents into various participatory forms of opposition, and in 1970, he traveled to Laos and North Vietnam as part of an independent peace contingent under the auspices of the National Mobilization Committee to End the War in Vietnam.

Dowd appeared to know everybody who was anybody on the left, counting as friends and associates a host of luminaries, such as liberation theologian and “worker priest” Father Daniel Berrigan. Alarmed by Berrigan’s tireless advocacy in Latin America, the Catholic Church had sought to exile him as a university chaplain at Cornell—where he appeared at Dowd’s doorstep in 1967, Dowd recalled, “like kerosene arriving at a fire.” As the 1960s faded, Dowd could count on the support of close friends such as Howard Zinn, Noam Chomsky, and Daniel Ellsberg. Describing his first encounter with the latter, Doug said that Ellsberg had called him up out of the blue to say how much he admired Dowd’s trenchant analysis of the pathologies of U.S. capitalism in The Twisted Dream (1974). “Professor Dowd, how can you know so much?” Ellsberg asked earnestly. With typical insouciance, he replied: “Dan, how can you know so little?”

Ellsberg had parlayed his Ph.D. in economics into a career as an analyst with the RAND Corporation, working deep inside the military-industrial complex. Like many trained economists then and now, he had never bothered to try to understand the actual workings of the U.S. economy—a pervasive incuriosity that Dowd found outrageous. His own praxis as an economist never deviated from the stance Paul Baran advocated in “The Commitment of the Intellectual,” an important 1961 Monthly Review article: “An intellectual is…in essence a social critic, a person whose concern is to identify, to analyze, and in this way to help overcome the obstacles barring the way to the attainment of a better, more humane, and more rational social order…as such he is inevitably considered a ‘troublemaker’ and a ‘nuisance’ by the ruling class seeking to preserve the status quo.”

By the time Dowd resigned from Cornell to return to San Francisco in 1970, he had risen to become chair of the economics department. He said that his proudest moment at Cornell came when soon-to-become Secretary of Defense James Schlesinger had sought an academic position at Cornell—which Doug managed to block. Like Ellsberg, Schlesinger had been a RAND analyst.

As we sped across the Bay Bridge one beautiful day in the early 1980s—Doug always moved fast—he offered a quick reflection on the character of a key member of what C. Wright Mills termed the “power elite.” With great contempt, he recounted a story that was apparently well-known among his fellow Pacific pilots: “war hero” George H. W. Bush (then serving as Reagan’s vice president) had somehow managed to walk away from a court-marshal offense after parachuting from his plane during combat over the Pacific, leaving his crew aboard to crash and die.

These and many other astonishing conversations took place during the more than ten years that Dowd and I worked together, preparing and producing our live two-hour radio program Economics Demystified on KPFA, a listener-supported station broadcasting throughout northern California. Once a month, we joined forces to discuss the most relevant political-economic issues of the moment—all under the guidance of the peerless radio host Mama O’Shea, whose own weekly program Shouting Out featured a cornucopia of dissenting voices. Doug went full-steam all the way, whatever the topic. Relentless, but never heedless—this was the very essence of Dowd’s approach.

For his dedication and energy in the classroom, Doug was venerated by generations of students. Teaching was his greatest gift, and he shared it with one and all into his nineties, when he would travel by train from his home in Bologna, Italy, to the nearby University of Modena. But no classroom could contain his unstoppable energy: Doug always seemed to be everywhere, whether debating Milton Friedman on television, volunteering to lead night and weekend classes to Bay Area citizen groups, cooperating with teach-ins, or speaking at rally after rally.

Doug was a tall, graceful, and athletic man who focused his remarkable physical energy on tennis and biking, winning or placing in many of San Francisco’s competitive adult tennis tournaments. Before it was stylish to do so, Doug owned and wore out a series of handmade bicycles—many of them the workmanship of a favored Italian artisan. Until he finally moved to Italy for good late in life, he zipped around the steep hills of San Francisco, enduring the inevitable bikers’ mishaps on busy streets with aplomb. Keen to break away from sedentary academic life, he always showed up in great form, tanned and rosy-cheeked, with a twinkle in his Irish blue eyes.

More than any other economist among his contemporaries, Dowd revered Paul Sweezy, both for his theoretical acumen and his gift for lucidly expounding on the phenomena—stagnation, financialization, monopoly—that marked various moments in the evolution of U.S. capitalism.

At the same time, Dowd despaired of a younger generation of left economists who he argued (notably in his 1982 article “Marxism for the Few,” reprinted in this issue) could not shake off the influence of their neoclassical teachers. They were always, in his words, “looking over their shoulders,” cutting and containing their analyses to meet the arcane standards of conventional academia, thereby assuring their critique would be politically stillborn. Their efforts were incomprehensible to those he termed “ordinary working people.” Disdaining scholasticism, Dowd sought transparency: he never anticipated that his audiences had, or should have, any training in formal “economics.” He could speak easily and respectfully—but with great authenticity—to everyone he met, regardless of age, race, gender, nationality, occupation, or background. They understood immediately that he was the real McCoy.

Doug had two other weapons that he used ably and tirelessly in his fight for progressive social change. One was his voice: with gracefully paced, inspiring oratory, delivered in a deep, well-modulated baritone, he charmed, delighted, and informed his listeners. The other was his flowing prose. Open at random any of his many books, and you will immediately notice that such trenchant political-economic critique has only in the rarest instances been sculpted and expressed with such verve and fluidity. Anyone who wants to know more about his remarkable life should read his 1997 autobiography, Blues for America—an inimitable work stylistically influenced by John Dos Passos’s masterful U.S.A. trilogy.

Dowd had passion and style in abundance. He was a rock-bottom radical, a measure of the very best in the human soul.