Dear Reader, we make this and other articles available for free online to serve those unable to afford or access the print edition of Monthly Review. If you read the magazine online and can afford a print subscription, we hope you will consider purchasing one. Please visit the MR store for subscription options. Thank you very much. —Eds.
Notes from the Editors
by The Editors
(Sep 01, 2018)
Topics: Marxism Movements Places: Global 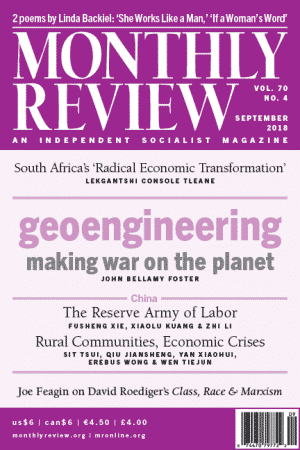 As this issue goes to press, we have just been informed of the death of our comrade and colleague Samir Amin. We will address the achievements of his life in an upcoming issue.

As Sigrid Schmalzer, Daniel S. Chard, and Alyssa Botelho note in the introduction to their collection Science for the People: Documents from America’s Movement of Radical Scientists (University of Massachusetts Press, 2018), Science for the People, which ran from 1969 to 1989, was “the most important radical science movement in U.S. history.” It arose out of the rebellion of numerous scientists against the militarization of science during the Vietnam War. The movement initially took the name Scientists for Social and Political Action—later changed to Scientists and Engineers for Social and Political Action—but came to be commonly known as Science for the People, after its magazine. A total of 109 issues were published, providing a steady stream of critiques of the prevailing social relations of science. The entire archive is available at http://science-for-the-people.org.

Science for the People was in many ways an outgrowth of an earlier movement of Marxist scientists, centered in Britain in the 1930s and associated with such figures as J. D. Bernal, J. B. S. Haldane, Joseph Needham, Lancelot Hogben, Hyman Levy, and C. H. Waddington. Like their predecessors, scientists associated with Science for the People rejected the division between “pure” and “applied” research, emphasizing the social relations of science. (The term “science for the people” originated in Bernal’s 1952 pamphlet Marx and Science, and the struggles of British left scientists in the 1930s was known as the “social relations of science” movement.) But unlike earlier Marxist scientists, who advocated a larger role for state funding of science to meet social needs, those linked to Science for the People faced an entirely different situation in the post-Second World War period, particularly in the United States, where “big science” under the control of the military-industrial complex and monopolistic corporations now dominated. Here it was the misuse rather than the use of science that was the major issue. (See Ben Allen and Sigrid Schmalzer, “Science, Power, and Ideology,” in Schmalzer, Chard, and Botelho, Science for the People, 13–14; Donna Jeanne Haraway, “The Transformation of the Left in Science,” Soundings, Winter 1975; J. D. Bernal, Marx and Science [International Publishers, 1952], 41–47.)

The group did far more than just publish a magazine. Activists formed chapters around the country, and included physicists, engineers, biologists, as well as representatives of other scientific groupings and social movements. The organization became well known in the later years of the Vietnam War, from 1969 to 1973, for its role in principled disruptions of the conventions of mainstream scientific organizations and its active promotion of the central critical themes of, as one FBI report declared, (1) anti-imperialism, (2) social control, and (3) science for survival (“FBI Teletype, December 22, 1972,” in Schmalzer, Chard, and Botelho, Science for the People, 58–59).

Science for the People was also known for the intellectual stars who nurtured it and those whom the organization itself nurtured, including such giants in their fields as Rita Arditti, Anne Fausto-Sterling, Stephen Jay Gould, Ruth Hubbard, Richard Levins, and Richard Lewontin. Such figures contributed powerful critiques that characterized Science for the People throughout the two decades of its existence—for example, the 1982 special issue on “Racism in Science” in which Lewontin, founder of the group’s Chicago chapter, published his important article “Are the Races Different?” There he wrote: “Human racial differentiation is, indeed, only skin deep.” This was echoed in Gould’s famous argument that “Human Equality Is a Contingent Fact of History.” (See Lewontin, “Are the Races Different?” in Schmalzer, Chard, and Botelho, Science for the People, 128–33; Stephen Jay Gould, The Flamingo’s Smile [Norton, 1985], 185–98.)

Years later, at a 2014 conference on Science for the People—part of the movement for its revival—Levins argued that the secret of the radical science movement from the beginning was “One Foot In, One Foot Out,” meaning that left scientists had to be serious researchers while retaining their roots in activism and cultivating their independence from the scientific establishment. There were many principled examples of this independence among the organization’s members. Lewontin resigned from the National Academy of Sciences (NAS), to which he had been elected, in response to the NAS’s complicity with the Vietnam War and with U.S. oppression in general, and Levins blocked his own election to the NAS for the same reason (Levins, “Foot In, One Foot Out,” in Schmalzer, Chard, and Botelho, Science for the People, 31–35; Haraway, “The Transformation of the Left in Science,” 455).

After the magazine’s demise, both Levins and Lewontin wrote frequently for MR and contributed to its famous July–August 1986 issue on “Science, Technology, and Capitalism,” guest edited by David Himmelstein and Steffie Woolhander. Levins and Lewontin also coauthored two pathbreaking works: The Dialectical Biologist (Harvard University Press, 1985) and Biology Under the Influence (Monthly Review Press, 2007).

In their prefatory note to the July 2018 (re)inaugural issue, Christopher Dols and Emily Glaser, Science for the People’s publisher and managing editor, declare:

Our return to publishing this summer begins with a collection of essays, largely from academics and policy experts, on the subject of climate engineering. Rather than soliciting contributions from “all sides,” the assembled editorial collective—of which we were active participants—chose to step into this passionate controversy with an argument in mind, holding close to Rachel Carson’s wisdom that “the human race is challenged more than ever before to demonstrate our mastery, not over nature but of ourselves.”

That is, we largely reject any large-scale manipulation of the environment (e.g. the very problem we are attempting to address) in favor of a critique of the science and interests behind various “geoengineering” proposals. As John Bellamy Foster put it in his contribution, “Geoengineering under the present regime of accumulation has the sole objective of keeping the status quo intact.” But we also understand the scale of the damage done and the culprits responsible for it. So we eagerly include Holly Jean Buck’s “Best-Case Scenario for Putting Carbon Back Underground,” a call for extracting carbon capture technologies and infrastructure from the very companies least likely to use them responsibly.

In the coming weeks, we will publish about one additional essay per week—each with a different angle on the scheme…. We intend for the final collection (and the website along the way) to reflect the inevitable corrections, debates and passions to appear. (“Standing on the Shoulders of Giants: A Note on Science for the People’s Return to Publishing.”)

Science for the People is back! We at MR welcome the return of this great publication and movement of the U.S. left. Look to their website for information on how to join chapters of the revived organization.

We would like to recommend to MR readers the new book by Victor Wallis, Red-Green Revolution: The Politics and Technology of Ecosocialism (Political Animal, 2018). Two of its nine chapters originally appeared in MR, to which Wallis is a longtime contributor. His book is extraordinary in its crystal clarity and its focus on the major issues facing the ecosocialist movement, particularly questions of technology. We hope to provide a detailed assessment of this work in a future issue.

Our readers may also be interested in an article, “‘A Spy Who Turned His Family In’: Revisiting David Greenglass and the Rosenberg Case,” by our friend and MR author Michael Meeropol in a recent issue (vol. 17, no. 2) of American Communist History. Meeropol is the older son of Ethel and Julius Rosenberg.

Making War on the Planet
The Radicalization of Dashiell Hammett