Dear Reader, we make this and other articles available for free online to serve those unable to afford or access the print edition of Monthly Review. If you read the magazine online and can afford a print subscription, we hope you will consider purchasing one. Please visit the MR store for subscription options. Thank you very much. —Eds.
Poetry
by Linda Backiel
(Sep 01, 2018)
Topics: History Imperialism Places: Global 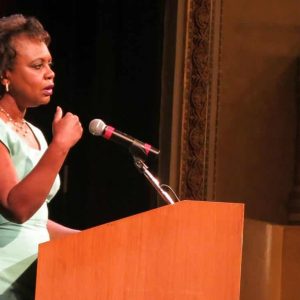 “She works like a man,” that’s what
the neighbors said. To her daughter’s
intensest shame, she works in the fields,
like a mule, or man. While the mothers
of others hide behind lace-pretend curtains,
hers wades, ankle-deep in mud,
apron hitched high, planting onions,
hoeing, raking, putting in corn,
pulling green worms off tomatoes
calling cows, feeding hogs, piling up
a wall of fat against the inevitable
winter. Birth–women’s work–that
never stopped her for long, nursing,
mending, binding what was broken,
chopping wood, hauling water, and
on Sunday, the wheezing pump organ
sings, the sewing machine keeps time.
No praise, little joy. Plucking chickens
an art more practiced than tricks with hats
and veils, mirror and eyebrow. Duty
is her sister, steadies her hand
with axe, hatchet, shotgun. A woman alone
because she has no choice. Necessity
is her angel, truth, her beauty. The common
gossip sings her alleluias:
She works like a man.

If a Woman’s Word

Who remembers
Anita Hill, prosecutor, professor, reduced
to an audience for preening penis jokes,
sitting ramrod straight with a truth to tell to
stopped-up
ears in dark suits? Her words
had no weight, were only
words. She did not say, I had to hide
from him, as best I could,
she only said,
I had to tell the truth. I could not
keep silent.
Her truth made them squirm, but
her words did not
tip the balance.
His word, a terrible weight, even as
a minority of one. He writes in curlicues
about “furtive reconfiguration” to mean
abortion
is not a right. His silence
may mean death.
If a woman’s words had weight
these things would not happen.

View all posts by Linda Backiel →