Dear Reader, we make this and other articles available for free online to serve those unable to afford or access the print edition of Monthly Review. If you read the magazine online and can afford a print subscription, we hope you will consider purchasing one. Please visit the MR store for subscription options. Thank you very much. —Eds.
Notes from the Editors
by The Editors
(Nov 01, 2018)
Topics: Ecology History Marxist Ecology Places: Global 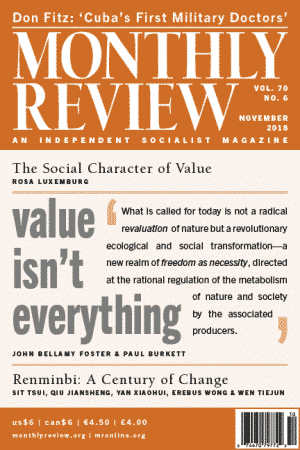 The Review of the Month for this issue of Monthly Review, “Value Isn’t Everything” by John Bellamy Foster and Paul Burkett, was written for the Autumn 2018 issue of the quarterly journal International Socialism. Due to what we regard as the immense theoretical and practical significance of the questions the piece addresses, it is being published here (in slightly revised form) as well. The Earth System crisis of the twenty-first century has resulted in a vast upsurge of ecological Marxism and of ecosocialism more generally, building on the environmental critique of capitalism embedded in classical historical materialism. At the center of this new revolutionary ecological analysis is the recognition that the system of capital accumulation and valorization develops hand in hand with the alienation and expropriation of nature, in line with Karl Marx’s theory of metabolic rift.

As Foster and Burkett explain in this issue, the historically specific rift in the metabolism between humanity and nature has its source in the contradiction within capitalist production between what Marx called the “natural form” and the “value form,” such that the latter is promoted at the expense of the former. In the mid-nineteenth century, when industrial capitalism was confined to a fairly small region, even within Europe, and many of the effects could be displaced on the rest of the globe, the robbery of nature entailed in metabolic rift could still be ignored to a considerable extent. Today, however, when industrial production is truly global and operating on an immensely greater scale, the ecological destruction arising from the capitalist mode of production is affecting the biogeochemical cycles of the entire Earth System, threatening the survival of humanity, and is inescapable within the present system.

The retrieval and systematic elaboration of this analysis, already embedded in classical historical materialism, has greatly added to our understanding of the present world predicament. Nevertheless, it would be naive to suppose that such theoretical advances would develop smoothly without resistance; and while there have been great gains from the standpoint of praxis, there have also been opposing tendencies, even within the left, including those associated with Green theory, Latourian posthumanism, production-of-nature analysis, left-ecomodernism, so-called natural capitalism, and other fashionable schools of thought. What these approaches have in common is a reluctance to accept (or the actual rejection of) the need for a revolutionary reconstitution of society at large due to the ecological and social depredations of the system. Rather, they tend to see the solution to the present planetary emergency in the form of the extension of value and commodity relations to all of existence, coupled with various technological fixes. Such analyses cannot be promoted on the left, however, without at the same time seeking to destabilize the Marxian value critique and questioning the theory of metabolic rift. Similarly, left critics opposed to the critical thrust of contemporary ecosocialism commonly refer to its characterization of the contradiction between capitalism and the larger Earth System as a dualistic and catastrophic formulation. The dialectic, we are told, deals not with contradiction, negation, alienation, crisis, and catastrophe—all of which are said to reflect dualistic thinking—so much as with integration, harmony, the bundling of natural and social qualities, and the conflation of all categories, the endless gray on gray.

The result in the last three years, particularly since the publication of Jason W. Moore’s Capitalism in the Web of Life (Verso, 2015), which served to ignite this wide-ranging debate, has been a developing conflict on the left over these critical questions. Fortunately, this debate has engendered a set of powerful theoretical responses that have served to clarify many of these issues, enhancing our overall understanding, and leading to a fuller development of the ecosocialist critique. Moreover, this has taken the form of a remarkable degree of cooperation among Marxian theorists—a closing of the ranks, so to speak—aimed at defending the basis of a rational critique of capitalism’s commodity-value fetishism, while highlighting the inherent contradictions associated with its creative destruction of the planet.

While Monthly Review itself has been pivotal in this respect, we would like to highlight here the leading roles played throughout this particular debate both by International Socialism in Britain and by Climate and Capitalism (climateandcapitalism.com) in Canada. International Socialism has published a series of enlightening pieces on capitalism and nature in the past two years, strongly defending the Marxian critique in this area, by such thinkers as Ian Angus, Martin Empson, Jean Parker, Ian Rappel, and Camilla Royle, along with Foster and Burkett. Of signal importance, in our view, is Parker’s “Ecology and Value Theory” (a review of Moore’s Capitalism in the Web of Life) in the January 2017 issue of International Socialism. Rappel’s essay on “Natural Capital: A Neoliberal Response to Species Extinction” in the latest issue of International Socialism warns against the neoliberal adoption of “natural capital” and “ecosystem services” approaches, which seek to extend capitalist value relations to all of nature, internalizing everything within the market. At the same time, it cautions against left approaches that have embraced many of the same liberal assumptions. Climate and Capitalism has emerged as the central forum with respect to the overall debate on value, capital, and nature, including pieces by Angus, Burkett, Foster, and Parker, together with Hannah Holleman, Fred Magdoff, Andreas Malm, Kamran Nayeri, Gordon Peters, Richard Smith, and many others—thereby placing it at the forefront of the advances being made in this area.

A number of formidable books have come out in the last two years critically addressing these same issues, including: David Harvey’s Marx, Capital, and the Madness of Economic Reason (Oxford, 2018); Malm’s The Progress of This Storm (Verso, 2018); Stefano B. Longo, Rebecca Clausen, and Brett Clark’s The Tragedy of the Commodity (Rutgers, 2015); and three works published by Monthly Review Press—Angus’s Facing the Anthropocene (2016) and A Redder Shade of Green (2017), and Kohei Saito’s Karl Marx’s Ecosocialism (2017).

Harvey’s Marx, Capital, and the Madness of Economic Reason is particularly noteworthy in this context. It discusses how the “madness of economic reason” is now so pervasive that it threatens to penetrate the left itself. “There currently is a widespread desire,” he writes, “to incorporate the hitherto ‘not valued’ into the regime of capitalist value production and circulation. This strategy is understandable (partly because of the positive connotations that a term like value has and the understandable demand for recognition of what is all too often ignored). But it gets things entirely the wrong way round politically” since it is the resistance to capitalist value relations from outside that is one of the key elements in the opposition to capitalism. This misdirected strategy, he goes on to explain, includes “moves to integrate the free gifts of nature into the stream of value production by some arbitrary valuation devices (e.g. those proposed by environmental economists).” This, however, adds up “to nothing more than a sophisticated green-washing” (90–92). Malm’s Progress of This Storm provides a wide-ranging response to the charge of dualism in Marxian ecology presented by Latourian hybridists, production-of-nature theorists like Neil Smith and Noel Castree, and the world-ecology perspective associated with Moore. Saito’s Karl Marx’s Ecosocialism recounts the origins and development of Marx’s theory of metabolic rift. Facing the Anthropocene and A Redder Shade of Green by Angus, and The Tragedy of the Commodity by Longo, Clausen, and Clark, while engaging with these theoretical debates, are probably more significant for their application of the method of Marxian ecology to the analysis of the crises of the Anthropocene epoch. Here we are reminded that the point is not simply to understand the capitalist depredations of the environment but to transcend them: System Change Not Climate Change!

For those wanting to understand the political clashes that constitute present-day India, and especially the recent right-wing turn, Bernard D’Mello’s magisterial India After Naxalbari: Unfinished History decodes a whole political epoch, stretching from the humanist movements of 1968 to the reactionary ascendance in 1989, and, underlying all of this, ongoing peasant revolts. According to Arundhati Roy, this is “a thread of Indian history that mainstream historians have tended to either ignore or misrepresent.” India After Naxalbari focuses on the armed peasant uprisings that began in Naxalbari at the foot of the Indian Himalayas in 1967, which ignited the world’s longest-running people’s war, fought by what came to be known as the Maoist peasant Naxalites. D’Mello’s analysis takes us further and explains the rise in the context of the growing economic polarization in India capitalized upon by Hindutva (meaning literally Hinduness) nationalism, culminating with the rise of the semi-fascist and sub-imperialist government of Narendra Modi in 2014, and the current repression throughout Indian society—though there are still major forces of resistance. Underlying D’Mello’s whole analysis is a theory of imperialism drawn from the work of Paul A. Baran and Samir Amin. More information on the book can be obtained at Monthly Review Press.

Value Isn’t Everything
The Enigma of China’s Growth