Dear Reader, we make this and other articles available for free online to serve those unable to afford or access the print edition of Monthly Review. If you read the magazine online and can afford a print subscription, we hope you will consider purchasing one. Please visit the MR store for subscription options. Thank you very much. —Eds.
Notes from the Editors
by The Editors
(Apr 01, 2019)
Topics: Imperialism Movements Places: Americas United States Venezuela 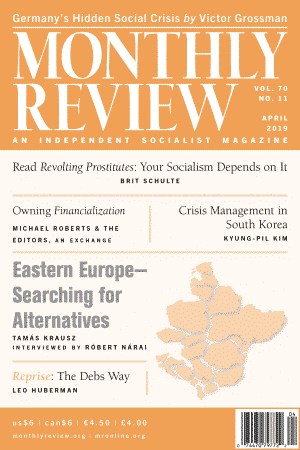 In the midst of the U.S.-directed coup attempt against the Bolivarian Republic of Venezuela in January–February, Donald Trump delivered a number of verbal attacks on socialism in Venezuela, Cuba, and Nicaragua. The immediate object was to justify U.S. attempts to overthrow the Bolivarian Republic. The less immediate, but hardly less important goal was to tarnish the growing social democratic (self-styled democratic socialist) movement in the United States, associated with figures like Bernie Sanders and Alexandria Ocasio-Cortez.

The Trump administration’s ideological strategy was fully on exhibit in both his State of the Union address delivered on February 5, in which he attacked socialism and Venezuela, and in a speech delivered to Venezuelan-American expatriates in Miami on February 18, which included some twenty-nine negative references to socialism. The main technique used by his speechwriters was to invert the socialist critique of capitalism by simply substituting the word socialism for capitalism—a ploy worthy of Fox News. Thus, for example, he told his audience: “We know that socialism is not about justice, it’s not about equality, it’s not about lifting up the poor. Socialism is about one thing only: power for the ruling class. And the more power they get, the more they crave.”

Behind Trump’s virulent attack on socialism in Venezuela, Nicaragua, and Cuba, however, was his declaration of what could be called the Trump Doctrine, according to which the mere existence of socialism anywhere in the world justifies Washington’s economic, political, and military warfare against such countries. In violation of international law, Trump is extending the anti-Communist politics of the Cold War to twenty-first-century socialism. Moreover, Trump sought to tar with the same “socialist and communist” brush the burgeoning social-democratic movement in the United States, associated with figures like Sanders and Ocasio-Cortez. He has identified them with Venezuela, Nicaragua, and Cuba, while pointedly declaring that “America will never be a socialist country.” This was followed up by a speech by Mike Pence a few days later, on March 1, delivered to the Conservative Political Action Conference, attacking socialists in the Democratic Party and declaring: “If you want socialism, just look at Venezuela.… The struggle in Venezuela is between socialism and freedom.”

In the face of the right’s utilization of anti-Venezuela propaganda as a basis for sullying socialism as an idea, Sanders and Ocasio-Cortez have endeavored to distance themselves from Venezuela, to the point that they have ended up backing the general administration policy, while stopping short of supporting actual military intervention. Already in a fundraising letter for his 2016 election campaign, Sanders criticized those who had compared him to Hugo Chávez, whom he characterized as a “dead Communist dictator,” despite the fact that Chávez’s socialist government had emerged victorious in eighteen internationally recognized elections going back to 1998. On January 24, 2019, Sanders tweeted that “the Maduro government has waged a violent crackdown on Venezuelan civil society, violated the constitution by dissolving the National Assembly, and was reelected last year in an election that many observers said was fraudulent. The economy is a disaster and millions are migrating.” Conspicuously missing was any mention of U.S. attempts to economically strangle Venezuela, beginning under Obama and intensifying under Trump. On February 21, he said that Maduro had been “abusive,” but insisted that “the United States must not use military force” in Venezuela. Two days later, Sanders tweeted that the Bolivarian government should “allow [Washington-directed] humanitarian aid into the country” and avoid inflicting violence on its own population, repeating virtually word for word Trump’s phrases from a few days earlier. He now denies altogether that Venezuela had “free and fair” presidential elections in 2018, referring to the Venezuelan government as a “despotic regime.”

In comparison, Ocasio-Cortez’s statements on Venezuela have been muted. Nevertheless, taking what appears to be a similar position to that of Sanders, she has stated that the conflict in Venezuela comes down to a question of an “authoritarian regime versus democracy.” By “authoritarian regime,” she was not referring to the Trump administration but to the Venezuelan government. Indeed, she stated that Venezuela was a case of a failed democracy.

In order to safeguard their ambitious social-reform program, the new coterie of Democratic Party socialists have thus sought to separate themselves from Venezuela and other Latin American socialist states, presumably abandoning these countries (including not only Venezuela, Cuba, and Nicaragua, but no doubt Bolivia as well) to their fates at the hands of U.S. imperialism. Sanders, in his current campaign for the presidency, has recently championed a more ethical foreign policy. He has shown considerable independence in questioning Israel’s occupation of Gaza and Saudi Arabia’s war in Yemen, while challenging past U.S. military interventions. Nevertheless, faced with his first real test with regard to U.S. intervention in Latin America in the form of the ongoing Washington-directed attempt at regime change in Venezuela, he has avoided any serious questioning of U.S. policy. Instead, he has repeated all the false rationales offered by the Trump administration for the imposition of U.S. economic sanctions and the attempted coup against Caracas, seemingly falling prey to the new ideology of so-called humanitarian intervention. He was one of a group of eleven Senate Democrats who took the lead in late February 2018—a week after the Venezuelan opposition indicated, with U.S. support, that it intended to boycott the upcoming presidential elections—in condemning Venezuela for planning to hold a “sham election.” This then played into the Trump administration’s imposition of further economic sanctions after the election took place.

This raises the historic question of social imperialism, a term that first arose in 1916–17 in Austro-Marxist Karl Renner’s essay by that title, and in V. I. Lenin’s Imperialism, the Highest Stage of Capitalism. In his essay on “The Sociology of Imperialisms,” written in 1919, the conservative Austrian economist Joseph Schumpeter defined social imperialism along the same lines as Marxist theory—as a form of imperialism whereby “entrepreneurs and other elements woo the workers by means of social welfare concessions which appear to depend on the success of export monopolism” (Joseph Schumpeter, Imperialism and Social Classes [Oxford: Blackwell, 1951], 114–15). More generally, social imperialism has come to mean a policy of social reform at home and imperial hegemony abroad. In Britain, it was deeply ingrained within important parts of the left. Thus, Fabians, such as George Bernard Shaw and Sidney and Beatrice Webb, became major advocates of the promotion of the British Empire abroad and social welfare at home, as parts of a unified social imperialist policy. (For the classic study of British social imperialism in the early twentieth century, see Bernard Semmel, Imperialism and Social Reform [Garden City, NY: Doubleday, 1960].)

In the United States, social imperialism of this kind has long been practiced by the Democratic Party and the American Federation of Labor-Congress of Industrial Organizations. In the mid–1960s, the Socialist Party of America, led by Michael Harrington—who was later to spearhead the formation of the Democratic Socialist Organizing Committee and the present Democratic Socialists of America—together with a number of major civil rights groups, including the National Association for the Advancement of Colored People and the Urban League, refused to question the Vietnam War, and adhered to a strong Cold War anti-Communism even in the context of the war, as part of what was regarded as a tradeoff that included Lyndon Johnson’s civil rights and War on Poverty legislation (see Paul Le Blanc and Michael D. Yates, A Freedom Budget for All Americans [New York: Monthly Review Press, 2013]). This led Martin Luther King, Jr., himself a self-described “democratic socialist,” to issue a major dissent, railing against U.S. imperialism in his famous 1967 anti-Vietnam War speech, insisting, as always, that justice was indivisible: it could not be had at home if denied abroad. He strongly rejected U.S. interventions abroad to maintain its global hegemony.

In this issue, we are reprinting Leo Huberman’s classic essay, “The Debs Way,” from the January 1956 issue of Monthly Review. Huberman was a founding editor of MR, coediting the magazine, together with Paul Sweezy, from its first issue in May 1949 up until his death in November 1968. “The Debs Way” not only reminds us of the importance of Eugene Debs to the history of socialism in the United States, but also brings out some of the core beliefs of Huberman’s own approach to socialism. Writing in the McCarthy era, Huberman declared:

We must quite realistically face the fact that with the Left as weak and pulverized as it is, we are deluding ourselves if we think we can exert any significant influence on American politics today. Nor should we continue to kid ourselves into thinking that we have only to water down our program a bit, accommodate here, and compromise there—and we will be a force again.

Not so. That is the road to our own extinction. For what do we gain if our voice is finally heard again—but the message it proclaims is garbled, or so modified as to be no longer worth hearing?

Let us, instead, do what we can do—speak out honestly and clearly for what we stand for. Let us proclaim—and teach—our socialist faith; anywhere and everywhere, to the many or to the few. Let us stop worrying about the size of our movement and think more of its quality.

Today’s conditions are of course vastly different from when Huberman wrote this, more than sixty years ago. There is now a resurgence of the left in the United States. But the basic principles that Huberman derived from Debs remain relevant. We should not kid ourselves into thinking that we can build a vital socialist movement by watering down our ideas through a process of accommodation and compromise. Nor can it be achieved by promoting a policy of socialism at home and imperialism abroad. Socialism too is indivisible.