Dear Reader, we make this and other articles available for free online to serve those unable to afford or access the print edition of Monthly Review. If you read the magazine online and can afford a print subscription, we hope you will consider purchasing one. Please visit the MR store for subscription options. Thank you very much. —Eds.
Notes from the Editors
by The Editors
(Nov 01, 2019)
Topics: Economic Theory Marxism Philosophy Political Economy Places: Global 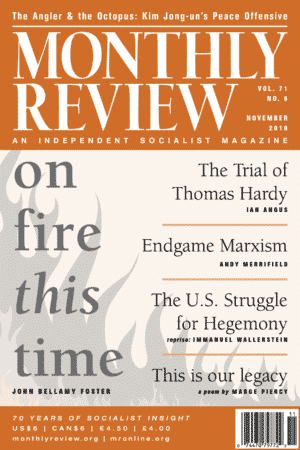 Immanuel Wallerstein, the celebrated world-systems theorist and longtime contributor to Monthly Review and Monthly Review Press, died on August 31, 2019. Wallerstein first achieved international fame with the publication in 1974 of his The Modern World-System: Capitalist Agriculture and the Origins of the World-Economy in the Sixteenth Century (the first in a four-volume masterwork on the Modern World-System, which was to continue with volume II, Mercantilism and the Consolidation of the European World-Economy, 1600–1750 [1980]; volume III, The Second Era of Great Expansion of the Capitalist World-Economy, 1730s–1840s [1988]; and volume IV, Centrist Liberalism Triumphant, 1789–1914 [2011]).

For those who encountered Wallerstein’s The Modern World-System when it first appeared in the 1970s, the effect was electrifying. It was here that he introduced his fundamental distinction between the two kinds of world-systems: world-empires and world-economies, with the latter playing a relatively minor role in most of world history, since almost inevitably absorbed by tributary-based world-empires. World-empires were conceptualized as a single political entity, like the Roman Empire, ruling over large parts of the world, exacting tribute, but lacking economic integration. A world-economy, in contrast, represented an integrated division of labor with divided political sovereignties. In this scheme, the distinctiveness of the capitalist world-economy, or the modern world-system, was that it constituted a single world-economy “ruled” over by competing nation-states, which had existed for five hundred years without being transformed into a world-empire. The capitalist world-economy had the additional characteristic of being divided into a center, a semiperiphery, and a periphery. Wallerstein also postulated a third potential form of world-system, namely a socialist world government, which would integrate both economy and polity at the global level. In later analyses, Wallerstein was to develop this framework by examining shifting political hegemonies, long cycles (approximately twenty-five to thirty years in the up and down swings), unequal exchange, commodity chains, understandings of race and gender within the modern world-system, and numerous other factors.

Wallerstein conceived of the capitalist world-economy as a somewhat static structure historically in that it could not be said to advance or significantly modify its laws of motion through the emergence of distinct stages via industrialization—for example, mercantilism, freely competitive capitalism, and monopoly capitalism—as in traditional Marxist theory. Rather, the modern world-system adhered to the same basic framework in the twentieth century as in its sixteenth- and seventeenth-century origins. The main economic shifts and crises within the world-system were the result of the changes in the economic productivity (as well as military development and financial architecture) of individual states, resulting in alterations in world hegemony. The late twentieth century and early twenty-first century were thus characterized above all by The Decline of American Power (the title of his 2003 book), just as the late nineteenth and early twentieth century had been dominated by the decline of British hegemony, and the mid–seventeenth and early eighteenth centuries by the decline of Dutch hegemony. In the twenty-first century, however, Wallerstein argued, the world for numerous reasons—economic-political-military-ecological—would not see a repetition of this pattern and the formation of a new hegemony. Rather, the transition would be to a new, noncapitalist world-system, the nature of which was yet unknown, but which would most likely be rooted in a world revolution of which the global revolt of 1968 was a preamble.

Wallerstein had started off his career in the 1960s as a mainstream social scientist concerned primarily with colonialism/decolonialism in Africa. However, he moved steadily to the left in his analysis as a result of his attempts to draw out the historical implication of Fernand Braudel’s longue durée, first in relation to Africa and then in relation to the Global South in general, leading to his theory of the modern world-system. Beginning with the publication of The Modern World-System, if not sooner, he came to be closely associated with the Marxian left. Over the next nearly half century, his work gave strong credence to traditional theories of class exploitation and imperialism, relying extensively on Karl Marx’s analysis. His analysis thus increasingly overlapped with the dependency- and imperialist-theory traditions, as exemplified by Paul Sweezy, Harry Magdoff, Samir Amin, Andre Gunder Frank, and Giovanni Arrighi, the last three of whom, together with Wallerstein, came to be known as “the Gang of Four” and wrote a number of books together, including The Dynamics of Global Crisis (1982) and Transforming the Revolution (1990) for Monthly Review Press.

In the final sentences of The Modern World-System in 1974, Wallerstein wrote: “The mark of the modern world is the imagination of its profiteers and the counter-assertiveness of the oppressed. Exploitation and the refusal to accept exploitation as either inevitable or just constitute the continuing antinomy of the modern era, joined together in a dialectic which has far from reached its climax in the twentieth century.”

William (Bill) Edwin Foster, a longtime MR friend and supporter, father of MR editor John Bellamy Foster, died on September 1, 2019. Foster was a member of the Civilian Conservation Corps during the New Deal. He joined the U.S. Navy during the Second World War and served as a pharmacist’s mate in the Pacific. He graduated with a BA from the University of Washington and later became a schoolteacher, medical adjudicator, and a used-bookstore owner, founder of Orca Books in Olympia, Washington. A lifelong socialist, he supported Henry Wallace for president in the 1948 elections. He often remarked on the termination of three professors at the University of Washington in 1948, during the McCarthyite witch hunt, for refusing to say if they had or had not ever been members of the Communist Party and not signing loyalty oaths. Paul Sweezy, soon to cofound MR with Leo Huberman, had provided testimony in favor of the professors.

Foster eventually became a strong supporter of Monthly Review. One of his fondest memories was meeting Sweezy and Harry Magdoff in New York in 1985. He spent his last years reading the magazine from cover to cover each month, engaging with the big ideas and doing research for MR Online, providing numerous postings for Editors’ News Wire. He was especially concerned with issues of U.S. imperialism, nuclear armaments, and climate change. In 2016, at age 95, he traveled alone to a talk by Bernie Sanders in Springfield, Oregon, waited for hours in line, and managed to get a seat near the front. In one of his very last statements, he said that Monthly Review had proven that it is possible to hold out for the truth and that it needed to continue its work. He will be greatly missed.

We were pleased to read the editorial note celebrating our seventieth anniversary in the latest issue of Capitalism Nature Socialism (vol. 30, no. 2). We republish it here to commemorate our many decades of work and to extend our thanks for the well-wishes:

We would like to congratulate the Monthly Review Editors on occasion of the seventieth anniversary of that eminent journal. Since 1949, Monthly Review stands as a beacon of politically engaged Marxism in North America and beyond. Its importance to building the intellectual framework for socialism cannot be overestimated. Over the decades many of us have gained much insight by immersing ourselves in the journal’s pages. We are particularly grateful to John Bellamy Foster for bringing environmental concerns to greater prominence within the journal and thereby to a larger socialist audience. The indefatigability of the Monthly Review Editors in developing and diffusing socialist ideas, through all sorts of media, is truly breathtaking. We would therefore like to join Monthly Review in celebrating the anniversary and we wish the journal many happy returns.