Dear Reader, we make this and other articles available for free online to serve those unable to afford or access the print edition of Monthly Review. If you read the magazine online and can afford a print subscription, we hope you will consider purchasing one. Please visit the MR store for subscription options. Thank you very much. —Eds.
Review
by Victor Wallis
(Dec 01, 2019)
Topics: Ecology Economic Theory Marxism Political Economy Socialism Places: Global 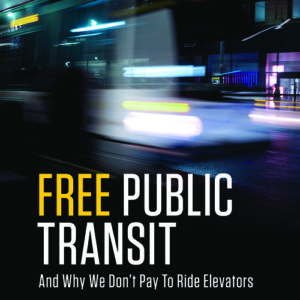 Victor Wallis is the author of Red-Green Revolution: The Politics and Technology of Ecosocialism (Political Animal Press, 2018) and Democracy Denied: Five Lectures on U.S. Politics (Africa World Press, 2019). He teaches at Berklee College of Music.

Free Public Transit: And Why We Don’t Pay to Ride Elevators, edited by Judith Dellheim and Jason Prince, gives readers a distinctive blend of the visionary and the practical. It surprises us with rarely publicized instances in which quite sweeping societal transformations have been carried out. The matter-of-fact narratives, covering a wide span of national settings, allow us to envision new angles from which to confront some of the key issues of our time, from employment to civility to the rescue of the natural environment.

Why should anyone accept the idea of having to pay in order to get on a bus or a train? It has long been a matter of virtual consensus that education should be free, and the same principle is increasingly recognized (even in the United States) to be the only one that makes sense with regard to health care. Why not then for public transportation? To be sure, not everyone has the same transit needs, but this is also the case for health care. More important—beyond the unpredictability of such need at the level of any single individual—is the society-wide benefit of assuring that everyone’s needs are satisfied.

In the case of transit, the scope of this benefit is enormous. In the book’s chapter on Poland, economist Łukasz Ługowski notes that the investment in free public transit “in most cases pays for itself, both directly and indirectly, through fewer accidents on the roads, cleaner air, less noise, faster ambulance transport (thanks to lower car traffic), the elimination of infrastructure expenses related to the existence of tickets, and also in the form of improved mobility for older people, which is vital for preventative health” (98).

Among the “infrastructure expenses” (as noted in other chapters) is the whole dimension of law enforcement, applied to people short of money who try to ride without paying. As for improved mobility, it is important not only for the elderly but also for young people, people with disabilities, those commuting to and from work, those looking for work, and people simply pursuing everyday activities. Free transit, by reducing reliance on cars, cuts down on congestion and thereby reduces travel time, thus generally enhancing quality of life.

The broader social effects of free transit are highlighted in the chapter on Sweden by Anna Nygård, an activist with that country’s Planka.nu (fare-dodge now) organization, which uses mass civil disobedience to press its demands. She writes that the question of public transit “is not only about numbers, nor is it just technical, regarding income or carbon dioxide levels—it is about what kind of city we want to live in. Do we want to live in an open, accessible, and social city where relationships can thrive? Or a closed and bordered city, a surveillance city…?” (118).

Nygård points also to the gender dimension of the transit issue, noting that women not only are typically less well paid than men, but also are more likely than men—as a function of their daily routines—to “travel short stretches with many stops.”

The transit issue points to an underlying question of the distances that people must go in order to move from one activity to another. The most direct way to reduce travel time is to increase proximity or, as Nygård puts it, “to focus on accessibility rather than mobility.” This in turn requires calling into question zoning practices that lead to a segregated city structure. Free transit is thus part of a larger scenario in which, thanks to a reconfiguration of urban space, there is greater access for every resident (or visitor) to all of the city’s neighborhoods, activities, and services. As Germany’s Die Linke activist Michael Brie notes in his chapter on Belgium, however, such benefits, including also “declining health expenditures from improved air quality, more exercise, and lower levels of stress…are rarely directly linked to specific projects, nor are they noticeable at the treasury, and rarely even make it into the political debate” (84).

The original model for such achievements was the transformation of the Italian city of Bologna in the 1970s. A classic article by Swiss journalist Max Jäggi (first published in the 1977 collection Red Bologna) describes how, through an extended process of public meetings throughout the city, the elected Communist government established free transit at certain hours as part of a far-reaching plan to cut down on the presence of private cars and assure the preservation of vibrant public space in the city’s center. In a follow-up chapter by two urban studies scholars, we learn how Bologna has continued to expand its car-free spaces in more recent years, making possible (among other things) a steady decline in traffic accidents.

Most surprising to me in this book is the report by Estonian politician Allan Alaküla on how free transit in the Estonian capital Talinn was eventually extended beyond that city to encompass bus and rail service for the whole country. The move within the capital was sparked by the economic slump of 2008–10; it was hoped that “free mobility would stimulate the local economy.” The idea was approved by referendum at the municipal level in 2012 and was extended in 2013 to the national level. By this time, no party could any longer oppose so popular an arrangement, in which train ridership, which had been expected to double, instead increased by a factor of seven!

While it’s easy to see why free transit is popular, it’s harder to know what it is about a particular society that allows the usual conservative arguments against public services to crumble so easily. In the case of Talinn, what appears to have happened, contrary to prior expectations, is that the gains in tax-revenue resulting from heightened economic activity were greater than the sum that was lost from no longer collecting fares (91). A substantial portion of the costs of running a non-free transit system are typically devoted to fare collection, even though the amounts collected are never enough to allow the system to operate without subsidies, whether from government agencies or directly from the businesses whose employees or customers are its users. Although I cannot generalize from the varying accounts in this book (which lacks an index), I suspect that the total revenues from fares may often not exceed by much the costs of collecting them.

Beyond all the inefficiencies associated with user fees (fares paid by riders), as well as the social-justice benefits of free transit, we should keep in mind all the negative traits of the private car, which sociologist Georgios Daremas, in his chapter on Greece, calls “a ‘weapon of mass destruction’ in peacetime,” noting that its “terror-like, anti-social impact…is accompanied by the externalisation of its costs onto national health systems” (172).

Aside from the cities and countries already mentioned, the book includes chapters on Los Angeles, Toronto, Montreal, France, Germany, Brazil, Mexico, and China. Without going into detail on all these cases—or about the authors’ treatments, some of which are more conceptual while others are more narrative—one can make a number of general observations:

View all posts by Victor Wallis →