Dear Reader, we make this and other articles available for free online to serve those unable to afford or access the print edition of Monthly Review. If you read the magazine online and can afford a print subscription, we hope you will consider purchasing one. Please visit the MR store for subscription options. Thank you very much. —Eds.
Notes from the Editors
by The Editors
(Dec 01, 2019)
Topics: Climate Change Ecology Economic Crisis Political Economy Places: Global 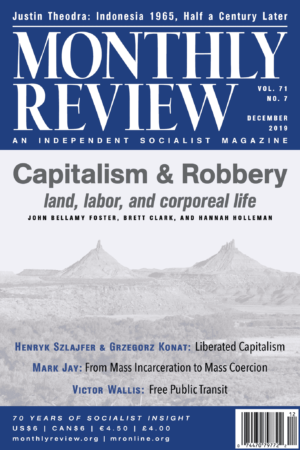 On October 18, 2019, Bloomberg ran an article by its financial columnist Elisa Martinuzzi entitled “Which is Scarier, Climate Change or CLOs?” The article featured a picture of Greta Thunberg at the top and started off with the statement: “Call it the Greta effect. Global finance titans gathered at the annual International Monetary Fund [IMF] meetings in Washington this week identified climate change as a key risk to the long-term health of the world economy.” But wait, Martinuzzi tells us, a far bigger immediate threat to the world economy is highly leveraged corporate borrowing, which with the world recession now just around the corner, could put in jeopardy as much as $19 trillion in corporate debt, around 40 percent of total corporate borrowing, according to the IMF. The problem is that “tucked away in hidden pockets of the financial system” are an estimated $1.2 trillion in highly leveraged loans, including “collateralized loan obligations [CLOs], pools of risky loans that are bundled and sold in tranches,” now amounting to about $600 billion. All of this constitutes plenty of inflammable material with which to set off a financial firestorm. Around 80 percent of nonbank financial institutions are now considered by the IMF to be just as vulnerable as they were during the Great Financial Crisis of 2008–10, up from 60 percent less than a year ago. Martinuzzi concludes: “Which is scarier: climate change or CLOs? The fact is, both pose major global risks and demand attention. All due respect to Greta Thunberg but the corporate-debt time bomb is the more imminent threat.”

One can only react to such a column with a deep sense of irony. Yes, CLOs and other high-risk investments endemic to monopoly-finance capital are scarier to the capitalist class in particular than is the seemingly more distant and largely noneconomic threat of climate change. Indeed, for the capitalist economy climate change may increase insurance premiums but it also opens up entirely new markets, due to the melting of the arctic ice, the burning of the Amazon, and the drying up of the world’s freshwater sources, providing new realms for the extraction and sale of fossil fuels and other natural resources. There are trillions of dollars still to be made on fossil fuels, which is what counts from the perspective of profitability. Judging simply in the terms of financial capital, then, climate change scarcely matters on the books of corporations at present. For Martinuzzi, voicing the viewpoint of capital, we are clearly spending too much time focusing on climate change as a “global risk,” as opposed to an implosion of financial capital, which poses a much more imminent threat to the capitalist economy. The ecological crisis can be treated as largely external to capitalism in that the costs can be externalized on the population and the planet in order to protect profits. A financial crisis, however, directly threatens the corporate bottom line.

Bloomberg’s financial columnist insists that we need to get our priorities straight: the economy comes before the earth, capitalism before nature. The idea that disruption of the Earth System might have effects not directly registered on a corporate balance sheet irrevocably imperiling the entire world population seems not have even occurred to her. Yet, from any sort of realistic, world-wise perspective, it is clear that we are faced with two immense, imminent, and irreversible crises, one threatening within as short a time as a year to destabilize the world capitalist economy, the other promising to destroy the planet as a home to humanity, destabilizing industrial civilization and undermining the survival chances of hundreds of millions or even billions of people this century. Both represent the culmination of capitalist contradictions over centuries of development. Both point to the need to transform society in revolutionary ways, creating a new mode of production.

It is the coevolution of economic and ecological contradictions under global monopoly-finance capital that defines the epochal historical crisis of our times. When the next economic downturn occurs, the answer has to be, at a minimum, some sort of Peoples’ Green New Deal aimed at transforming the entire production system in ways that achieve the dual objectives of a just transition away from neoliberal capitalism (and eventually capitalism itself) and the creation of a more sustainable fossil fuel-free ecological order. The scariest thing of all is those who, representing the viewpoint of capital, try to tell us that we need to place top priority on propping up the existing irrational financial order, while giving far less attention to the struggle over climate change—all so as to keep the existing system of economic exploitation, robbery, and ecological destruction going. The only real answer to the epochal crisis of our times is to recognize that the problem is not an abstractly economic or ecological one; rather, the essence of the challenge is one of transcending the contemporary capitalist modality that has brought the world to the edge of absolute and total disaster.

In early October 2019, MR editor John Bellamy Foster delivered talks in Mauritius as part of the 2019 School of Ecology organized annually by the Center for Alternative Research and Studies (CARES) based in Mauritius. Frequent MR author Patrick Bond also spoke on the same occasion. Other MR authors have participated in previous years in the annual School of Ecology in Mauritius, including Brett Clark in 2016, Richard York in 2017, and Hannah Holleman in 2018.

A thousand kilometers east of Madagascar in the Indian Ocean, Mauritius is sometimes known as the birthplace of ecology. It was uninhabited when first discovered—together with the other two Mascarene islands, Réunion, today a French colony, and Rodrigues, part of Mauritius—by Arab seafarers perhaps as early as the tenth century. It appeared on a map with Arabic-sounding names in 1502. It was visited a few years later by the Portuguese, who made it a regular port of call but did not establish a permanent settlement on the island. At the end of the sixteenth century, Mauritius was settled by the Dutch, who, however, abandoned the island about a century later after a devastating cyclone. Shortly after, in the early eighteenth century, the island was colonized by the French. The French East India Company was to make Port Louis its capital in the Indian Ocean and thousands of African slaves were brought to work on sugar plantations on the island. In 1765, the East India Company ceded the island back to the French crown, leading to the appointment of Pierre Poivre as the French administrator of the island. Poivre introduced spice plants and a famous botanical garden. Mauritius was one of the islands, along with St. Helena (see Richard Grove, Green Imperialism: Colonial Expansion, Tropical Island Edens and the Origins of Environmentalism, 1600–1860), where ecological destruction had been particularly severe. The famous dodo, a flightless member of the pigeon and dove family more than three feet tall, was endemic to Mauritius but driven into extinction while the Dutch occupied the island. Mauritius was thought to have experienced climatic change due to deforestation and Poivre began an aggressive reforestation policy in order to stabilize the local climatic conditions.

During the Napoleonic Wars, Britain seized Mauritius and in 1835 abolished slavery in the colony. The British imported indentured servants from India—a system akin to chattel slavery in its sheer brutality. (For a wider sense of how the colonial expropriation of lands and people was tied to ecological destruction, see the Review of the Month, “Capitalism and Robbery: The Expropriation of Land, Labor, and Corporeal Life,” by Foster, Clark, and Holleman in this issue.)

Mauritius gained its independence from Britain in 1968, during which Britain imposed the illegal condition that Mauritius give up the Chagos Islands and forcibly removed the Chagos Islanders—all so that the United States with British compliance could have a permanent military base in Diego Garcia, from which it has launched its recent wars in the Middle East. Monthly Review Press author and close associate Michael Tigar played a key role in the legal appeal to the International Court of Justice, which declared in February 2019 that Britain should return the Chagos Islands to the Chagos Islanders and Mauritius. This decision was followed by a vote of 116–6 in the UN General Assembly evicting Britain and the United States from the Chagos Islands—a decision that those countries disregarded on so-called national security grounds. (See David Vine, “Diego Garcia: Troubling Past, Uncertain Future,” Diplomat, July 1, 2019.)

Ironically given its history, Mauritius is now one of the island nations most threatened by sea level rise, more extreme cyclones, and coral reef destruction, all of which are related to climate change. CARES and the School of Ecology in Mauritius, which brings activists from many African countries, is at the center of ecological resistance in the African and Indian Ocean regions, and is extraordinary for the depth of its on-the-ground critique of capitalism and climate change, which informs its political praxis at every level. All of us at Monthly Review who have visited the island have benefited enormously from what we have learned of the struggle there, while seeking to provide support. We consider CARES’s School of Ecology to be one of the key centers for creative ecosocialist thought and action in the world. (See Kashmira Banee, “John Bellamy Foster—Radical Change Is Coming—Part 2,” Center for Alternative Research and Studies, October 3, 2019.)

Capitalism and Robbery
The Wisdom of a Socialist Defector