Dear Reader, we make this and other articles available for free online to serve those unable to afford or access the print edition of Monthly Review. If you read the magazine online and can afford a print subscription, we hope you will consider purchasing one. Please visit the MR store for subscription options. Thank you very much. —Eds.
Notes from the Editors
by The Editors
(Jun 01, 2020)
Topics: Capitalism Economic Crisis Health Inequality Political Economy Places: Global 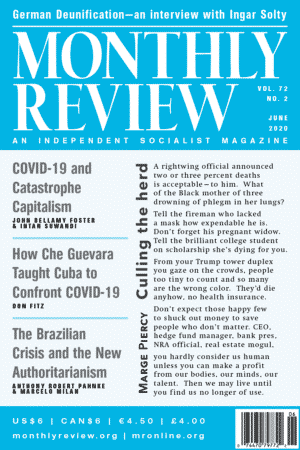 As we write these notes, the price on the futures contract for West Texas crude oil expiring for May delivery fell to a negative $37.63 a barrel, constituting the biggest drop on record, with sellers awash in oil paying buyers to cart it away. The price on a futures contract for June delivery is below $20 a barrel, less than a third of the price for a barrel of crude just two years ago (“Oil Plunges Below Zero for the First Time in Unprecedented Wipeout,” Bloomberg, April 20, 2020). The current massive oil glut is the product of the effects of the tight oil or shale oil revolution, which for a time turned the United States into the biggest oil and gas producer in the world. Now, suddenly as a result of an overproduction of world oil, made far worse by the sudden falloff in demand due to the COVID-19 pandemic, we are witnessing the possible euthanasia of the U.S. tight oil industry, bleeding cash even before the oil price collapse and encumbered with mountains of debt. It is in this context of a world petroleum glut, predating the present crisis, that a world oil deal between Russia and Saudi Arabia/the Organization of the Petroleum Exporting Countries (OPEC), with Washington as a kind of backroom participant, was agreed to, marking a global shift in oil geopolitics.

This followed a struggle over the production and pricing of oil between Russia and Saudi Arabia. In the face of a glut in the world supply of oil pushing prices down, the Saudis tried early this year to dictate a schedule of production cuts by OPEC+ (OPEC plus Russia and Mexico). Yet, Russia refused to go along. When a previous Russia-Saudi Arabia agreement to cut production of oil restored prices after the 2015 price drop, the major beneficiary had been the United States where tight (that is, fracked) oil production increased rapidly. Russia thus rejected the 2020 Saudi proposal, in part because U.S. production would once again be unaffected. Both Saudi Arabia and Russia then announced increases in production and prices went into free fall to levels not seen for the last two decades, and then only once since the Second World War (“Crude Oil Prices—70 Year Historical Chart,” Macrotrends, accessed April 21, 2020).

The impact was immediately felt by the United States, long a major net importer of oil, but now exporting as much as it imports. This is entirely the result of the rapid increase in production of tight oil from a negligible percentage of all U.S. oil production in 2010 to well over 60 percent at present (“Tight Oil Development Will Continue to Drive Future U.S. Crude Oil Production,” U.S. Energy Information Administration, March 28, 2019). But the cost of production of tight oil—even aside from the enormous uncounted environmental damage—is so high that, even before the events of March 2020 associated with the COVID-19 pandemic, leading producers faced default on their vast debts. And indeed, within days of the Saudi-Russia failure to agree, Whiting Oil, which had been the leading oil producer in North Dakota (now a major oil-producing state), filed for bankruptcy citing the increased Saudi Arabian and Russian production.

Independent oil producers (such as the Hunt brothers in earlier years and more recently the Koch brothers) have for two generations been a leading force in the Republican Party, driving it ever further to the right. They are a crucial constituency for Donald Trump. That community is faced with immense losses at current prices. With world oil prices falling to around $20 a barrel, few, if any, of the independent producers could survive even in the medium term, and even some of the majors that have moved into tight oil would be threatened. Even when oil prices dropped briefly to $40 a barrel in 2015, hundreds of smaller tight oil producers went bankrupt.

Other constituencies were affected as well. The great Too Big to Fail banks, including JPMorgan Chase, Wells Fargo, and Bank of America, have been massive lenders to tight oil (Patrick Greenfield, “Top Investment Banks Provide Billions to Expand Fossil Fuel Industry,” Guardian, October 13, 2019). Debt securities of the leading tight oil producers, “junk debt” well before the price collapse, are present in huge amounts in market-traded bond funds. There are many millions of relatively high-paid jobs in the (almost all Republican) oil-patch states, and a major constituency in the handful of right-wing trade unions that have backed Trump’s antienvironment initiatives. In short, both big finance and some nativist labor aristocracy who were enthusiastic Trump supporters were also threatened.

Trump therefore entered into the negotiations between Russia and Saudi Arabia to achieve the attempted production limitation agreement among OPEC+ and the prospect of higher prices. The key previously missing element was U.S. participation, but Trump could not make a persuasive claim to gain any power to order production cuts in the United States (though in Texas the Railroad Commission does have that power) (Rachel Adams-Heard, Kevin Crowley, and Javier Blas, “Texas Railroad Commission Mulls Oil Output Cuts,” Rigzone, March 23, 2020). What the United States did “promise” was that U.S. production would drop by a substantial amount, even at the hoped-for prices an agreement would achieve, as a result of “market forces.” This was of course no promise at all, as the Russians said. What that “promise” does entail, however, is that the United States would not intervene to thwart the so-called market forces and maintain production, for example by special subsidies for the endangered tight oil producers. Instead, it would stand aside and let the slow legal processes of bankruptcy and reorganization gradually diminish the production of tight oil at a loss. At the time, while appreciating Trump’s blessing (useful in bringing the Saudis around), the Russians made clear that they were not counting on the implicit promises of the U.S. regime, whom they have openly stated they regard as “nedogovorosposobnyy” or “not-agreement-capable.”

The vast increase in tight oil production of the last decade empowered the most aggressive wing of the “Washington Consensus” in its projects of confrontation with disobedient foreign major oil producers, Venezuela and Iran. As long as Venezuela was an important and necessary source of U.S. oil imports, overt seizures of its assets abroad and other acts just short of war were off the table. The rapid rise of tight oil production enabled Obama’s policy of ever-increasing pressure against Venezuela. And Iran’s probable ability if provoked by U.S. aggression to interfere with the export of Arabian oil, while causing some pain to oil consumers due to price increases, would not threaten the U.S. economy in the way it would have done when the United States was a net importer of oil and Saudi supplies were crucial. Trump’s Israel-inspired offensive against Iran, not merely sanctions but assassinations that amount to acts of war in traditional terms, were thus made possible. As a strategic matter, the aggression against Venezuela and Iran had further effects throughout Latin America and the Middle East precisely because of the diminished influence of the two anti-imperialist oil producing states that were under attack. The rollback of the “pink tide” in Latin America and the U.S.-backed war against Syria were thus also enabled by the flood of tight oil production in the United States.

The environmental costs of the explosion in tight oil production were also substantial. Large amounts of natural gas were produced that lowered its price so much that it paid for tight oil producers to burn it off rather than attempt to sell it. This and other emissions in the course of extractive activity were among the causes of the U.S. failure to reduce carbon dioxide emissions in the 2010s when, for example, the EU countries were making progress if slowly. And the costs of water pollution, water and sand extraction (major inputs to fracking), and even waves of earthquakes were immense if not readily quantifiable. Projections of U.S. oil production, even from government sources and absent any attempt to imagine active steps to meet minimal goals to avert further climate warming, would be cut in half in the period between 2000 and 2050 absent tight oil. But with tight oil, it is projected to double.

As things stand today, with oil prices at $20 a barrel or lower (and even with prices as high as $30), Trump’s implicit undertaking not to interfere with the gradual reduction of tight oil production carried out at a loss would cause anguish to those same oil-patch friends whom he aimed to please by supporting the OPEC+ deal. All tight oil production at that price will be at a substantial loss. The bankruptcies that have begun will increase in number and large amounts of securitized and bank debt will become worthless. The prospect of further capital injections of the kind that powered the tight oil boom has vanished. And if, as Trump now suggests, the United States goes back on its word to let “market forces” operate to reduce U.S. production, the ensuing drop in the world price of oil will have not only the same result, but also at a faster pace. The Saudis and Russians as the swing producers can stabilize prices at a price so low that U.S. tight oil is doomed, and in response the United States has only the ability to lower prices further.

Seen from this overall perspective, the April 2020 OPEC+/Trump oil production deal can be considered with an optimistic glow. China has been reported to have encouraged the OPEC+/Trump deal, despite its role as the chief world importer of oil. And it is noteworthy that Russia (and China) have been the sole great powers that have supported—if in a limited fashion—Venezuela and Iran. The prospect of the euthanasia of U.S. tight oil is thus positive with regard to the two greatest threats we face: (1) nuclear war as a result of the current wave of U.S. imperialist aggression against Venezuela and Iran—and soon after against Russia (the preference of those who control the Democratic Party) or China (apparently now the bipartisan preference); and (2) the climate crisis debacle that hangs over us all.