Dear Reader, we make this and other articles available for free online to serve those unable to afford or access the print edition of Monthly Review. If you read the magazine online and can afford a print subscription, we hope you will consider purchasing one. Please visit the MR store for subscription options. Thank you very much. —Eds.
by Ian Angus
(Nov 01, 2020)
Topics: Climate Change Ecology History Marxist Ecology Places: Global 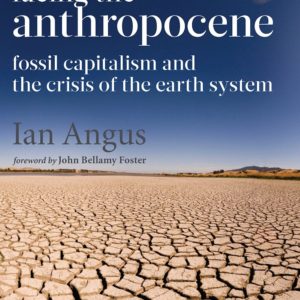 Ian Angus edits the website Climate and Capitalism. He is the author of numerous books and articles, including A Redder Shade of Green (Monthly Review Press, 2017).

This article is adapted from Angus’s afterword to the German edition (Unrast Verlag, 2020) of his pathbreaking book Facing the Anthropocene (Monthly Review Press, 2016).

When Facing the Anthropocene was published in 2016, it reflected, to the best of my ability, the state of scientific knowledge and debate at the time. But the world does not stand still, so it may be helpful to outline some important recent developments in Anthropocene science in the two main fields involved: geology, which has mainly been concerned with formally defining the new epoch; and Earth System science, which studies the global biological, chemical, and physical changes that are reshaping the conditions of life on this planet.

Geologists have divided Earth’s 4.5 billion years into a hierarchy of eons, eras, periods, epochs, and ages—divisions that reflect major changes in the dominant conditions and forms of life on Earth, as revealed in geological strata. The procedures for changing the Geological Time Scale, developed over two centuries, are rigorous and time consuming: it is not unusual for a proposed change to be investigated and debated for decades before a decision is made.

By 2016, a clear majority in the Anthropocene Working Group favored recognizing a new epoch, but they needed more specifically stratigraphic evidence before a formal proposal could be made to geology’s governing bodies, where a required 60 percent majority vote is required to approve any change to the Geological Time Scale. Subsequent research has focused on two questions.

When did the Anthropocene begin? In May 2019, after extensive evaluation of multiple possibilities, 88 percent of Anthropocene Working Group members voted that a new epoch began in the mid–twentieth century. That was a binding vote, so other possibilities are now off the table.

What physical evidence in the geological strata—known informally as a “golden spike”—is the best indicator for the new beginning of the new epoch? Many possibilities are being considered, each with advantages and disadvantages. For example, a 2018 study discusses multiple examples of “Anthropocene deposits” in England alone, including radioactive fallout, plastics, ash from fossil fuels, concrete, and various chemical pollutants that leave long-lasting and readily identifiable traces. All were rare or nonexistent before the Second World War, and all have been widely deposited since.1

Another recent article proposes the remains of modern broiler chickens, which are “morphologically, genetically and isotopically distinct from domestic chickens prior to the mid-twentieth century…[and] vividly symbolize the transformation of the biosphere to fit evolving human consumption patterns, and show clear potential to be a biostratigraphic marker species of the Anthropocene.”2

A golden spike must unambiguously identify the beginning of the new epoch and must be accessible for study by geologists, now and in the future. Choosing one that will be accepted by geologists around the world—a community that is scientifically conservative about timescale changes—will require detailed geological research. Anthropocene Working Group chair Jan Zalasiewicz describes the work as “extensive, fiddly and expensive,” and says that “it probably won’t be until late 2022, at the earliest, before the data is collected and collated so that the proposal can be formulated properly.”3 The COVID-19 pandemic, of course, may delay that further.

It is important to bear in mind that the debates over formal acceptance of the Anthropocene are specific to geology. In other Earth sciences, the idea that a qualitatively new stage in planetary history has begun is now widely accepted and has become a key part of analysis of global change.

In 2018, for example, the Intergovernmental Panel on Climate Change (IPCC) said that the “overarching context” for its report on the impact of 1.5ºC warming is that “human influence has become a principal agent of change on the planet, shifting the world out of the relatively stable Holocene period into a new geological era, often termed the Anthropocene. Responding to climate change in the Anthropocene will require approaches that integrate multiple levels of inter-connectivity across the global community.”4

In the IPCC’s view, “the Anthropocene offers a structured understanding of the culmination of past and present human-environmental relations and provides an opportunity to better visualize the future to minimize pitfalls, while acknowledging the differentiated responsibility and opportunity to limit global warming and invest in prospects for climate-resilient sustainable development.”5

Such statements mark an important advance in the IPCC’s approach to climate change, going beyond that single (very important) issue to viewing it as part of the global emergency that threatens society’s metabolic relationship with the rest of the Earth System—the core issue in Anthropocene science.

Does Anthropocene Science Blame All Humanity?

In the appendix to Facing the Anthropocene, I showed that Earth System scientists have repeatedly rejected claims that “everyone is responsible” for climate change. But, apparently because the word Anthropocene is derived from the Greek anthropos, meaning human being, some critics continue to charge that Anthropocene science blames all of humanity for the global environmental crisis. Some even claim that naming the new epoch Anthropocene is part of a deliberate effort to distract attention from capitalism’s responsibility.

Anyone who still believes this should read two recent scientific papers.

In August 2018, leading Anthropocene scientists wrote: “different societies around the world have contributed differently and unequally to pressures on the Earth System and will have varied capabilities to alter future trajectories.” In their supplementary information section, they add: “the wealthiest one billion people produce 60% of GHGs [greenhouse gases] whereas the poorest three billion produce only 5%.”6

Even more decisively, Will Steffen, who led the research programs that identified and defined the Anthropocene, has directly challenged the common claim that population growth is a major driver of the Great Acceleration. In a 2019 book edited by members of the Anthropocene Working Group, he pointed out that “nearly all of the population growth from 1950 to 2010 occurred in the BRICS and poor countries…[and] in 2010, the 18% of the world’s population that lives in OECD countries accounted for 74% of global economic activity.” He concluded that “industrial capitalists of the wealthy countries, not ‘mankind as a whole,’ are largely responsible for the Anthropocene, as seen in the Great Acceleration patterns.”7

These may not be perfect ecosocialist analyses, but they certainly explode the myth that Anthropocene science blames everyone. Let us put that confusion to rest.

Continuing research in Earth System science is producing evermore evidence confirming, as the radical environmentalist Barry Commoner wrote fifty years ago, that “the present system of production is self-destructive; the present course of human civilization is suicidal.” Here are some examples from recently published studies:

This list could be extended at great length—almost every part of the biosphere is being degraded at unprecedented rates. But the Anthropocene involves more than an accumulation of environmental problems. It is a crisis of the Earth System—disruption of the global biological, chemical, and physical processes that constantly interact and in which a change to any part can affect the rest. Some of the most important current research focuses on the potential for climate-stressed processes to destabilize each other, leading to feedback cascades that could disrupt the entire system.

A 2018 report signed by sixteen of the world’s leading Earth System scientists examined the possible effects of global warming on the complex cycles and feedbacks that shape the entire planet. They identified ten processes that have global impacts and could be radically accelerated by relatively small temperature increases, including thawing permafrost, release of ocean floor methane hydrates, weakened land and oceanic carbon dioxide absorption, increasing bacterial respiration in the oceans, dieback of Amazon and/or boreal forests, reduced northern snow cover, loss of Arctic and/or Antarctic sea ice, and melting of polar ice sheets.

Any one of these could substantially accelerate global warming by itself and, if one passes a tipping point, it may trigger a “tipping cascade” that permanently accelerates others. “For example, tipping (loss) of the Greenland Ice Sheet could trigger a critical transition in the Atlantic Meridional Ocean Circulation, which could together, by causing sea-level rise and Southern Ocean heat accumulation, accelerate ice loss from the East Antarctic Ice Sheet.”

If such a cascade happens, the earth could be propelled unstoppably toward “a much higher global average temperature than any interglacial in the past 1.2 million years and to sea levels significantly higher than at any time in the Holocene.” The resulting “Hothouse Earth” would experience “conditions that would be inhospitable to current human societies and to many other contemporary species.”8

Another study published in Science examined how major shifts in thirty different natural systems could affect each other. They found that in 45 percent of cases, exceeding a tipping point in one system can push others over the edge. “Regional ecosystems can be transformed by ecosystem management far away and, conversely, can themselves drive the transformations of other distant ecosystems.”9

An article in Nature in 2019 also addressed “the growing threat of abrupt and irreversible climate changes.” The authors concluded:

If damaging tipping cascades can occur and a global tipping point cannot be ruled out, then this is an existential threat to civilization. No amount of economic cost-benefit analysis is going to help us. We need to change our approach to the climate problem.…

The intervention time left to prevent tipping could already have shrunk towards zero, whereas the reaction time to achieve net zero emissions is 30 years at best. Hence we might already have lost control of whether tipping happens. A saving grace is that the rate at which damage accumulates from tipping—and hence the risk posed—could still be under our control to some extent.

> The stability and resilience of our planet is in peril. International action—not just words—must reflect this.10

By firmly placing climate change in the context of the Anthropocene, studies such as these challenge the view that global warming can be solved by minor changes and market reforms. Incremental measures such as carbon pricing cannot possibly address the systemic problems that are relentlessly driving global temperatures upward and pushing the earth into a new and unprecedented state in which the future of civilization itself is in peril.

In Facing the Anthropocene, I have tried to show how changes in capitalism during and after the Second World War caused the global changes that scientists have named the Great Acceleration. As a result, what Karl Marx called “an irreparable rift in the interdependent process of social metabolism” has become an interrelated network of global rifts. The greatest challenge facing our generation is to heal those immense breaks in Earth’s life support systems before it is too late.

View all posts by Ian Angus →

The Mexican and Latino Question
The Commodification of Online Cooperation