Dear Reader, we make this and other articles available for free online to serve those unable to afford or access the print edition of Monthly Review. If you read the magazine online and can afford a print subscription, we hope you will consider purchasing one. Please visit the MR store for subscription options. Thank you very much. —Eds.
Notes from the Editors
by The Editors
(Nov 01, 2020)
Topics: Ecology History Marxism Marxist Ecology Philosophy Places: Global 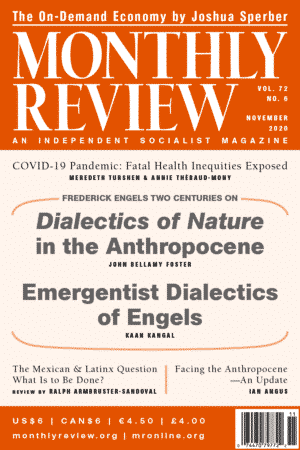 In this issue of Monthly Review, we are publishing two articles marking the two-hundredth anniversary of the birth of Frederick Engels: John Bellamy Foster’s “Engels’s Dialectics of Nature in the Anthropocene” and Kaan Kangal’s “Engels’s Emergentist Dialectics.” In these articles and in MR style in general, Frederick rather than Friedrich is used for Engels’s given name. To many readers today, this may seem to be a clear case of anglicizing his name on our part. But the issue is considerably more complex than that, raising some interesting questions with respect to Engels’s biography, the rights of authorship, and changing intellectual fashions.

Engels (born Friedrich Engels in Barmen, Germany, on November 28, 1820) lived in England for the majority of his life, first from 1842 to 1844, and then, after residing there intermittently in the intervening years, settling permanently in England from 1850 until his death in 1895. Engels was a cosmopolitan figure who spoke twenty some languages and was perfectly fluent in about half of them. The Chartist leader George Julian Harney was astonished, upon meeting Engels shortly after his arrival in Manchester in 1842, by his surprising facility with the English language. In Manchester, as a clerk in (and later part owner of) his father’s textile manufacturing establishment Ermen and Engels, Engels quickly fell in line with English customs, adopting the name Frederick while continuing to use Friedrich in Germany. (In these years, he also took on various assumed names, such as Frederick Burns and Frederick Boardman, seeking to live undetected and in defiance of social conventions with his Irish working-class common-law wife Mary Burns.) In the German exile community, Engels was known for his cheerful acclimatization to everyday life in England. Once, when a brawl was about to break out in a pub between German exiles and native Englishmen in a dispute over the Crimean War, Engels managed to restore calm and a certain levity by speaking loudly in a Lancashire accent (Rosemary Ashton, Little Germany [Oxford: Oxford University Press, 1986], 63). He lived long enough to see the rise of a socialist movement in England in the late 1880s and ’90s, and to play a significant part on the margins of the English movement, always as Frederick Engels.

In his time, Engels’s publications in English, of which there were many (he wrote about sixty articles for the Pall Mall Gazette alone)—including his contributions to William Morris’s Commonweal; his classic work The Condition of the Working Class in England, when it was finally translated into English (a U.S. edition appeared in 1887, followed by an English one in 1892); the 1888 English-language edition of The Communist Manifesto; and the 1892 edition of Socialism: Utopian and Scientific—all carried the byline Frederick Engels. He was also listed in this way on the title page of the 1887 English translation of Karl Marx’s Capital, volume 1. It was thus in conformity with Engels’s own personal preferences that, in Karl Marx and Frederick Engels’s Collected Works, as well as in most treatments of him in English-language publications, he was chiefly referred to as Frederick Engels, reflecting also his active role in English life.

Nowadays, however, Engels is more frequently referred to as Friedrich than as Frederick in English-language publications, imposing a certain global standardization—to the point that the bylines of works of his, including translations that he approved in his lifetime, have frequently been altered in this respect. This is mostly the product of the last few decades. Thus, in the introduction to the thirtieth anniversary edition of his book, The Life and Thought of Friedrich Engels (London: Palgrave Macmillan, 2020), Terrell Carver writes that when his book first came out, it was “somewhat rebellious, with a self-consciously Germanizing ‘Friedrich’ in the title, rather than the more anglicizing ‘Frederick.’ He [Engels] appeared that way in most English-language editions of his works” (4–5). What Carver fails to mention, however, is that the reason for this was that Engels himself chose to have his name appear that way in English-language editions of his works.

All of this is of course a very minor issue in comparison to the much bigger question, associated with the alleged divergence of Engels’s analysis from Marx. Engels is often accused today (short of any real evidence) of being a crude, positivistic thinker, and is frequently blamed for the emergence of deterministic versions of Marxism in the Second and Third Internationals. Such critical views toward Engels have been actively promoted in various ways by numerous eminent scholars within the Western Marxist philosophical tradition, including such leading academic figures as Carver, David McClellan, and Gareth Stedman Jones. Nevertheless, the attempts radically to separate Marx and Engels, often going so far as to attribute Marxism as an ideology to Engels rather than to Marx, have been strongly refuted in recent years—most recently and notably by Paul Blackledge in his important book Friedrich Engels and Modern Social Theory (Albany: State University of New York Press, 2019—see Paul Blackledge, “Engels vs. Marx?,” Monthly Review 72, no. 1 [May 2020]).

However, the sudden revival of interest in Engels that we are witnessing today has its source not so much in refutations of the divergence thesis as in the importance that Engels’s work has once again acquired in our time, in the attempt to address the ecological problem. His analysis of the dialectics of nature was to play a formative role in the development of modern ecological and evolutionary views and is now being rediscovered in that context. It is this more substantive issue that is taken up by John Bellamy Foster and Kaan Kangal in their articles in this issue, building on their recent analyses in Foster’s The Return of Nature: Socialism and Ecology (New York: Monthly Review Press, 2020) and Kangal’s Friedrich Engels and the Dialectics of Nature (Cham, Switzerland: Palgrave Macmillan, 2020).

With the rise of the Black Lives Matter movement, the growing influence of theories of racial capitalism, and the massive protests in the United States in May and June 2020, it has been necessary for the U.S. ruling class to seek an alternative ideological perspective with which to divide a still-growing insurgency. The threat to the powers that be was starkly evident in the decision of non-Black, mostly working-class populations to cross the color line and stand beside the Black population in protesting police lynchings of Black people, on a level unprecedented in U.S. history since the Civil War. The fear instilled at the top by the appearance of such a massive race-class alliance helps explain the extraordinary media promotion directed at Isabel Wilkerson’s Caste: The Origins of Our Discontent (New York: Random House, 2020), which has been praised to the skies in recent months by such establishment outlets as the New York Times, New Yorker, Wall Street Journal, and Los Angeles Times.

A Pulitzer Prize-winning author, Wilkerson laces her book with useful (if fairly well-known) references to the horrors of U.S. slavery and the influence of the U.S. Jim Crow system on Nazi ideology. However, the main purpose of her book is to resurrect the long-defunct concept of caste in the U.S. context, returning to the ideas of Gunnar Myrdal and a host of others, and polemicizing against the major criticism of such a perspective in Oliver Cromwell Cox’s Caste, Class, and Race (New York: Monthly Review Press, 1959; see also Cox’s “Race and Caste: A Distinction,” American Journal of Sociology [March 1945]). The objective of Wilkerson’s argument is to erase race and class from liberal discussions, replacing them with caste (presented as the structural reality behind U.S. race relations). In doing so, she draws on the very different historical and cultural experience of India. U.S. society, we are told, is primarily a caste system, like India, with whites on top and Black people at the bottom. (She treats Latinx and Asian immigrants as constituting a “blurred” category of “middle castes,” while Native Americans are seen as “exiled in their own country.” Isabel Wilkerson, “America’s Enduring Caste System,” New York Times, July 1, 2020.)

arguments go back to the middle 1940s and the white establishments’ efforts to whitewash race from social discourse. The reason was to prevent the idea being used for purposes akin to the ways Nazism did. Gunnar Myrdal and Ashley Montague, well-meaning liberals, led the charge. Myrdal’s massive study of race An American Dilemma wrestled unsuccessfully with the crises of racial oppression and how to save liberal democracy [presenting it as a caste problem]. Du Bois, Oliver Cromwell Cox and a cadre of Black social scientists had concluded the race problem remained the problem of the 20th century and could not be disguised by using other language. Furthermore, they concluded that racism and capitalism were so intimately connected that racial oppression could not be resolved without eliminating capitalism; socialism as a system, they reasoned, was necessary to resolve the crisis of what had crystallized into a white supremacist social system.

It is precisely to get rid of theories of racial capitalism, which are the result of more than a century of social-scientific investigations into the race problem in the United States and globally, going back to figures such as Du Bois (also an MR author) and Cox—whose works are now having a widespread impact at a movement level—that Wilkerson’s book has now become so key to shoring up the ruling ideology. (See the special issue of Monthly Review on racial capitalism, July–August 2020.)