Dear Reader, we make this and other articles available for free online to serve those unable to afford or access the print edition of Monthly Review. If you read the magazine online and can afford a print subscription, we hope you will consider purchasing one. Please visit the MR store for subscription options. Thank you very much. —Eds.
Notes from the Editors
by The Editors
(Dec 01, 2020)
Topics: Imperialism Political Economy War Places: Americas Asia China Europe Russia United States 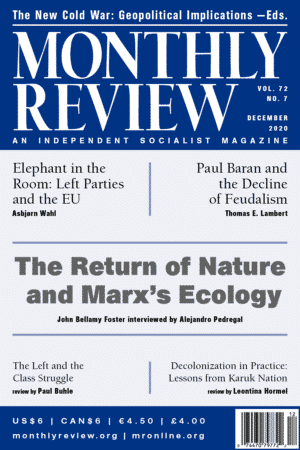 The United States is now in a New Cold War with Russia and China, with the focus increasingly on the latter. Where Russia itself is concerned, the onset of the New Cold War was a direct result of the U.S.-led Western imperial strategy during the decades following the demise of the Soviet Union. In the vacuum left by the Soviet disappearance from the world stage, the U.S. grand strategy (as promulgated by Paul Wolfowitz shortly after the Gulf War with Iraq) was directed at a rapid expansion of its sphere of geopolitical dominance, in order to establish it as a permanent unipolar power. This took the form of a series of wars, military interventions, and strongarm political tactics, directed at areas previously contested between the superpowers (including parts of the Middle East), as well as encompassing states that had been in the Soviet geopolitical sphere or previously part of the USSR (John Bellamy Foster, “The New Geopolitics of Empire,” Monthly Review [January 2006]: 9–14). In Europe, the North Atlantic Treaty Organization (NATO) pushed east into the former “really existing socialist” states, notably through the forcible dismemberment of Yugoslavia (Diana Johnstone, Fool’s Crusade [New York: Monthly Review Press, 2003]). By 2014, NATO had extended its net of influence as far as Ukraine in what had formerly been part of the USSR, now on the Russian border. In the Middle East, the West toppled Iraq and Libya and supported a war on Syria. In 2007, the United States formed Africom, a separate military command for Africa, as it expanded its military operations throughout that continent.

However, this expansion of the U.S. geopolitical sphere eventually suffered a serious setback, faced with a reemerging Russia, once again attaining great power status, this time as a capitalist power under Vladimir Putin. In response to the 2014 NATO-backed political coup in Ukraine, Russia annexed the Crimea (after a plebiscite) and sought to protect Russian nationals in Eastern Ukraine and secure its border with Ukraine through a limited, largely covert intervention. Washington portrayed this as a major act of aggression, justifying increased U.S. sanctions on Russia. In the same period, Russia managed to defeat NATO attempts at toppling Syria.

From the start, the Donald Trump administration sought a détente with Russia, with the object of fomenting a New Cold War with China, which it saw as a greater threat. The Democrats (with the support of the “intelligence community”), however, endeavored to keep the New Cold War with Russia going, accusing Trump of being soft on Putin. At that same time, the Democrats were quick to jump on the anti-China bandwagon as well. The upshot is that the New Cold War has taken the form of a bid for unipolar world power in the twenty-first century by the imperial triad of the United States/Canada, Europe, and Japan, which is being resisted by both China and Russia, which have been forced into what now approaches a defensive alliance. The world is thus faced with a growing danger of war, including the possibility of a global thermonuclear exchange.

The New Cold War with respect to China points to an even more serious conflict than the one with Russia, since it involves a direct challenge to U.S. hegemony over the world economy. In the 1970s, the West, as part of a grand strategy introduced by Richard Nixon and Henry Kissinger, chose to move from its so-called “containment” posture toward China to one of engagement, under the presumption that China, which had been experiencing rapid economic growth, could by these means be once again subordinated to the Western imperial system. This was also motivated by the desire of multinational corporations to get footholds in the vast Chinese market. With the location of much of the production of Western multinationals in China due to its low unit labor costs, China rapidly emerged as a center of global production and in 2001 was allowed into the World Trade Organization.

While still a poor country in terms of per capita gross domestic product (GDP), China has expanded in the last twenty years from being the world’s sixth-largest to second-largest economy. Its GDP has grown by over 6 percent annually for three decades. It is the leading country in the world in terms of industrial production, accounting for 30 percent of world manufacturing, and is the biggest trading partner of almost three-quarters of the world’s economies. It has a quarter of the world’s scientific, technological, mathematics, and engineering workforce. Its global Belt and Road Initiative is rapidly expanding its geoeconomic influence (M. K. Bhadrakumar, “Quad Won’t Fly. This is Why,” Indian Punchline, October 13, 2020). In the latest International Monetary Fund projections, China will account for 51 percent of world economic growth in 2020–21. Meanwhile, the U.S. economy (along with Europe and Japan) has been caught in a stagnation-financialization trap for half a century, a phenomenon that has been charted by Monthly Review over this entire period, and which was finally driven home to establishment economics after the Great Financial Crisis of 2008–10.

These developments have led to an increasingly belligerent stance toward China in Washington, already apparent in the Barack Obama administration and coming to a head under the Trump administration. The U.S. ruling class and most U.S. and Western multinational corporations seem to have concluded at this point that their long-term imperial dominance, tied to U.S. empire, is now threatened, even as they continue to extract imperial rent from China and the Global South. Even before the 2016 election, Trump and his then chief advisor, Steve Bannon, had emphasized the need for a hegemonic struggle with China, which Bannon defined as a “global existential war.” Trump appointed Peter Navarro, author of The Coming Wars with China and Death by China, as his main trade advisor (John Bellamy Foster, Trump in the White House [New York: Monthly Review Press, 2017], 32, 51–52, 84–85). This was followed by a trade war with China, which has been further intensified amid the COVID-19 pandemic. The main object of the trade war is to get U.S. multinationals to shift the key production nodes in their global commodity chains from China to other economies in the Global South with low unit labor costs, like India and Mexico, as a means for an “economic breakup with China” (Mike Gallagher, “Yes, America Is in a Cold War with China,” Wall Street Journal, June 7, 2020).

Meanwhile, a massive U.S. military buildup is taking place, justified as necessary to prepare for war with China. The U.S. State Department under Mike Pompeo has explicitly argued the case for a New Cold War with China, targeting the Chinese Communist Party, with the object of breaking the current Chinese state. This would allow Western forces to move in and once again subordinate China to Western aims (no doubt by repeating some version of the “shock therapy” imposed by the West on Russia in the 1990s, resulting in the demolition of its economy).

A major event in the New Cold War is the fourth launching in 2019 of the Committee on the Present Danger (CPD), which played a central role in articulating the Cold War strategies in the Joseph McCarthy, Ronald Reagan, and post-9/11 eras. The leading figure in this fourth incarnation of the CPD is Bannon. Unlike some of its earlier iterations, CPD IV is noticeably less bipartisan, dominated by Republicans, since directed at China alone and implicitly holding out the possibility of a détente with Russia. Nevertheless, the Democrats have not been slow to attack China, with the Joe Biden campaign accusing China not simply of human rights abuses but of “genocide,” and with the Senate Democrats pushing for a special $350 billion increase in the Pentagon budget over a decade aimed at China (“Joe Biden’s China Journey,” New York Times, September 6, 2020; “Senate Democrats Present $350 Billion Strategy to Counter China,” New York Times, September 17, 2020).

Cold Wars have as one of their prime features a splitting of the intellectual left and a complete closing off of dissent. In the McCarthy era, the Congress of Cultural Freedom (CCF) and its U.S. counterpart, the American Committee for Cultural Freedom (ACCF)—both funded by the CIA—recruited numerous intellectuals who helped construct a Cold War ideology, resulting in a host of articles in CIA-funded journals generating many of the dominant ideas of the postwar era, such as the “end of ideology.” Among the hundreds of anti-communist intellectuals benefiting from the CIA’s largesse through the CCF and ACCF were such notables as Theodor Adorno, Hannah Arendt, Daniel Bell, Isaiah Berlin, Sidney Hook, Arthur Koestler, Irving Kristol, George Kennan, Dwight MacDonald, Reinhold Niebuhr, Michael Polanyi, David Riesman, Arthur Schlesinger Jr., and Lionel Trilling (Frances Stoner Saunders, The Cultural Cold War [New York: New Press, 2013]; Patrick Iber, “Literary Magazines for Socialists Funded by the CIA,” Awl, August 24, 2015). Adorno, residing in Western Germany, wrote a blistering Cold War attack on Marxist philosopher Georg Lukács in a U.S. Army-published and CIA-funded journal Der Monat in Germany (translated in the CIA-funded journal Encounter in London). Ironically, this occurred while Lukács himself was under virtual house arrest in Hungary following the Soviet invasion for his participation in the socialist Imre Nagy government (Theodor Adorno, Walter Benjamin, Ernst Bloch, Bertolt Brecht, and Georg Lukács, Aesthetics and Politics [London: Verso, 2007], 143, 151–76; István Mészáros, The Power of Ideology [New York: New York University Press, 1989], 118–19).

Today, there is every sign that such ideological warfare, designed to split the left and close off discussion, is being resurrected in our time. The only answer is to continue to struggle for an independent, critical, and, indeed, socialist view. The more intense the imperialist drive for the perpetuation of U.S. global hegemony becomes, the more vital it is for us to comprehend the long history of imperialism and listen to noncolonial voices, especially from the Global South, while seeking a world of revolutionary change.

The Return of Nature and Marx’s Ecology
The great denial