Dear Reader, we make this and other articles available for free online to serve those unable to afford or access the print edition of Monthly Review. If you read the magazine online and can afford a print subscription, we hope you will consider purchasing one. Please visit the MR store for subscription options. Thank you very much. —Eds.
Poetry
by Marge Piercy
(Jan 01, 2021)
Topics: Ideology Inequality Marxism Places: Global 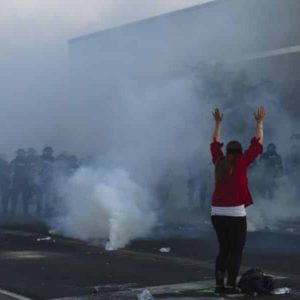 Somewhere a man is ranting
a man used to power and mad
with it. He is the one he loves
so how can others resist, deny

fail to carry out his sacred wishes?
Somewhere a man is denouncing
the world that is—because it doesn’t
reflect him, doesn’t serve him

any longer. He is at his most
dangerous as the power he
is used to slips away in winds
of change like lifting smog.

The man is furious with every
one including his cohorts: they
didn’t do enough for him. They
are useless scarecrows now.

We want him gone but he isn’t.
What more damage will he
manage in the storm of death
in which he’s imprisoned us?

Marge Piercy is the author of many books of poetry, most recently Made in Detroit. This poem was written after the 2020 presidential elections.
2021, Volume 72, Issue 08 (January 2021)

December 2020 (Volume 72, Number 7)
Standing with Standing Rock, Then and Now