Dear Reader, we make this and other articles available for free online to serve those unable to afford or access the print edition of Monthly Review. If you read the magazine online and can afford a print subscription, we hope you will consider purchasing one. Please visit the MR store for subscription options. Thank you very much. —Eds.
Notes from the Editors
by The Editors
(May 01, 2021)
Topics: History Imperialism Places: Britain Europe 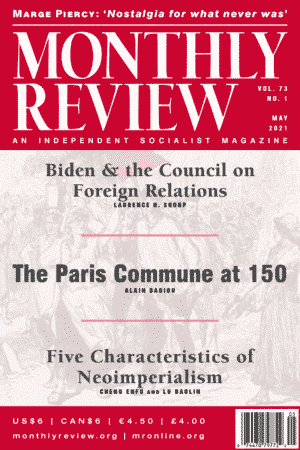 In December 1884, such important figures in England’s budding socialist movement as William Morris, Eleanor Marx, Edward Aveling, E. Belfort Bax, and John L. Mahon, among others, broke with the Social Democratic Federation led by H. M. Hyndman and formed the Socialist League. One of the key disputes leading to the break arose in relation to Hyndman’s then scarcely concealed jingoism and strong support for the British Empire.

The immediate issue in this regard was the British government’s sending of General Charles Gordon to Khartoum in the Sudan, supposedly to evacuate civilians and troops after the Sudanese defeat in 1883 of the Egyptian expeditionary force, led by British General William Hicks. Imperial Britain had recently gained colonial control over Egypt, following the latter’s defeat in the Anglo-Egyptian War, and were then seeking to extend their rule to Sudan, which had for decades been subject to Egypt (at that time itself an imperial subject of the Ottoman Empire), but where a revolt against foreign rule had begun in 1881, led by Muhammad Ahmad bin Abd Allah (the Mahdi). Arriving in Khartoum, Gordon fortified the city and unleashed his troops on surrounding tribal communities that he had originally befriended. He was killed in the ensuing siege of Khartoum in January 1885, two days before a British relief column arrived. With the death of Gordon, the public clamor for revenge and for the British imperialist conquest of the Sudan, promoted by publications like the Pall Mall Gazette and the Times, was deafening, leading eventually to a British invasion and machine-gun slaughter (with six Maxim guns) of the resisting Sudanese at Omdurman, who suffered more than eleven thousand fatalities, compared to twenty-eight British dead (and twenty others). As one eyewitness noted, “it was not a battle but an execution.” The subsequent British colonization of the Sudan brought to an end the brief period in the modern era, from 1885 to 1898, in which the Sudanese people were masters of their fate (John Ellis, The Social History of the Machine Gun [New York: Pantheon, 1975], 85–87).

The Socialist League distinguished itself from the start by declaring anti-imperialism central to the definition of socialism in the Marxian conception. The first issue of its journal Commonweal (edited by Morris) in February 1885 included not only The Manifesto of the Socialist League but also Bax’s article “Imperialism v. Socialism,” focusing on the Sudan, which declared: “Race-pride and class-pride are from the standpoint of Socialism, involved in the same condemnation. The establishment of Socialism, therefore, on any national or race basis is out of the question” (E. Belfort Bax, “Imperialism v. Socialism,” Commonweal 1, no. 1 [February 1885]). This was followed by the publication in March 1885 of Bax’s article “Gordon and the Soudan,” and by the publication that same month of The Manifesto of the Socialist League on the Soudan War, drafted by Morris, signed by the Provisional Council of the Socialist League, including Morris, Eleanor Marx, Aveling, Bax, Mahon, and Karl Marx’s long-time comrade Frederick Lessner, among others. The anti-imperialist stance of the Socialist League was also strongly supported by Frederick Engels, who developed his notion of British imperial hegemony and the aristocracy of labor, and the bearing of this on the possibility of socialism in Britain, in his article “England in 1845 and 1885,” in the second number of Commonweal in March 1885.

The Manifesto of the Socialist League on the Soudan War is worth recalling both as the first anti-imperialist manifesto to be issued by British socialists, and also for its continuing relevance to our time. It formulated a number of key points: (1) The British War on the Sudan was an “unjust war” against an Arab population whose “only crime” was “that they have risen against a foreign oppressor”; to describe the Sudanese as “rebels” in attempting to retake their own country was mere imperialist propaganda. (2) Claims of the British “ruling and propertied classes” that they were carrying out this aggression “in the name of community” were fabrications and should not be accepted by socialists. (3) An enormous share of the total surplus value generated by the British working class was “being squandered on Arab slaughtering” merely in order “that Eastern Africa may be ‘opened up’ to the purveyor of ‘shoddy’ wares, bad spirits, venereal disease, cheap bibles, and the missionary,” that is capitalism and imperialism. (4) “All the rivalries of [capitalist] nations have been reduced to this one—a degrading struggle for their share of the spoils of barbarous [noncapitalist] countries.” And (5) such hypocrisy associated with “commercial wars” conducted by soldiers of fortune like Gordon could be contrasted to the just position of “Mehemet Achmet (the Mahdi), the brave man who, in Oriental fashion, is undertaking the deliverance of this country, [and who] has repeatedly declared through his agents his willingness to release the Bashi-Bazouk garrison [referring presumably to captured Ottoman troops from the Hicks expedition] and give guarantees to refrain from aggression in Egypt”—that is, to keep the peace if the Sudan were allowed its own sovereignty.

No other statement at the time so thoroughly challenged imperialist conquest and commercial penetration, nor criticized so completely a colonization carried out in the name of “community,” civilization, and the protection of “primitive” populations—seeing such imperialism instead as emanating from the logic of capitalism. As Morris and the Socialist League declared on another occasion, “the war in the Soudan was prompted by the capitalist class, with a view to the extension of their fields of exploitation” (E. P. Thompson, William Morris [New York: Pantheon, 1976], 386). A crucial principle was the sovereignty of peoples and the self-determination of nations, which could not be legitimately set aside on the basis of the imposed ideology of imperialism. The anti-imperialism of the Socialist League together with the views of Engels from this time were to play a large role in the formation of V. I. Lenin’s theory of imperialism and his insistence on national self-determination.

The strong anti-imperialist stance of the Marxian socialists in the Socialist League went up against much of the socialist movement in Britain at the time, representing a split in the international socialist movement that was to become more evident during the First World War. George Bernard Shaw, who in his early years was a friend of Morris and Eleanor Marx, declined signing onto the Socialist League’s anti-imperialist position at the time of the Sudan War (George Bernard Shaw to Mahon, April 13, 1885, in International Review of Social History 7, no. 3 [December 1962]: 431–32). Fifteen years later, in the context of the Boer War, Shaw and people like Sidney and Beatrice Webb, leading figures in Fabian socialism, were to develop a stance of social imperialism, in which the object was to promote a more benign empire. Shaw argued for a “lofty and public-spirited Imperialism.” In a February 1900 address on imperialism, he stated, “a Fabian is necessarily an Imperialist in theory” (Bernard Semmel, Imperialism and Social Reform [New York: Anchor Books, 1960], 58–59).

Fabianism and the Empire: A Manifesto by the Fabian Society, drafted by Shaw (the adoption of which by the Fabians caused Walter Crane, Morris’s long-time associate, to withdraw his membership from the society), declared that Reconstruction in the United States had proven that Black people were racially incapable of democratic governance. Shaw went on to state: “We have thus two Imperial policies: a democratic policy for provinces in which the white colonists are in a large majority [white settler colonialism], and a bureaucratic policy where the majority consist of colored natives” (George Bernard Shaw, ed., Fabianism and Empire [London: Grant Richards, 1900], 15–16). In justifying the British and French Opium Wars against China, along with the just completed military intervention of the great powers in China in the context of the so-called Boxer Rebellion (Yihetuan movement), the Fabian manifesto declared: “The notion that a nation has a right to do what it pleases within its own territory, without reference to the interests of the rest of the world, is no more tenable from the International Socialist point of view…than the notion that a landlord has a right to do what he likes with his estate without reference to the interest of his neighbours.” Thus, Britain was correct in its imperialist wars designed to enforce “international rights of travel and trade.… If the Chinese themselves cannot establish order in our sense, the Powers must establish it for them” (Shaw, Fabianism and Empire, 44–47).

A similar division within the broad left on the issue of imperialism is threatening to reappear in our time, in the age of declining U.S. hegemony and the attempts to “Make America Great Again.” Advocating humanitarian imperialism (or human rights imperialism), many well-meaning progressives have fallen prey to the hegemonic human rights propaganda propagated by the U.S. State Department’s Bureau of Democracy, Human Rights, and Labor, which every year since 1976 has issued human rights reports on every nation on the globe—with the exception of the United States itself (causing other nations to retort: “We Have No Guantanamo”). These reports, and the closely related reports of organizations like the billionaire-funded Human Rights Watch that operate a revolving door with Washington, are designed to provide Washington and the North Atlantic Treaty Organization (NATO) with justifications for: (1) military buildups and threats of war; (2) the carrying out of actual wars and military interventions; (3) economic sanctions and blockades (a form of modern siege warfare designed to starve out populations); (4) political interference in the elections of other countries; and (5) the launching of “color revolutions”—all means that are directed primarily at non-subservient nations officially targeted as human rights violators by Washington.

MR readers will no doubt be interested to know that the March 2021 Notes from the Editors on China and the environment led to extensive replies by Richard Smith and Simon Pirani (Gabriel Levy). These replies were published in full on April 12, 2021, on MR Online, together with a rejoinder by the MR editors, under the title “China and Climate Change: An Exchange.”

We are pleased to announce that “The Sojourner Syndrome: Race, Class, and Gender in Health and Illness,” Leith Mullings’s (1945–2020) famous article dealing with the “life and death meaning of race, class and gender,” is now available online for free until the end of May. It can be found on the Wiley Online Library page for Voices, a publication of the Association for Feminist Anthropology. In the context of the COVID-19 pandemic, Mullings’s work remains as relevant as ever.

The Council on Foreign Relations, the Biden Team, and Key Policy Outcomes
The Point Is to Change It