Dear Reader, we make this and other articles available for free online to serve those unable to afford or access the print edition of Monthly Review. If you read the magazine online and can afford a print subscription, we hope you will consider purchasing one. Please visit the MR store for subscription options. Thank you very much. —Eds.
Notes from the Editors
by The Editors
(Dec 01, 2021)
Topics: Climate Change Ecology Marxism Movements Revolutions Places: Americas Global United States 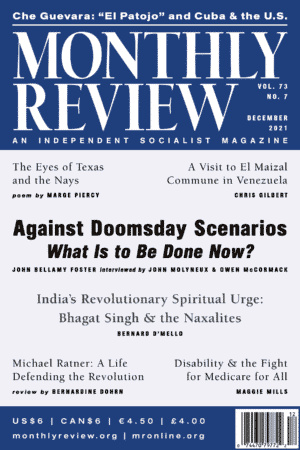 With the rapidly worsening capitalist demolition of the planetary environment and the expansion of ecosocialist movements in response, leading establishment think tanks, like the corporate-supported Breakthrough Institute, dedicated to promoting the ideology of “green capitalism” at any cost, have found themselves in a difficult place. Shorn of any credible arguments with which to advance their defense of the system, they are compelled to seek out what Karl Marx in the postface to Capital called “hired prize-fighters” exhibiting “the bad conscience and evil intent of apologetics.”

A remarkable article by Harry Saunders, “Does Capitalism Require Endless Growth?,” published in 2016 on the website of the Breakthrough Institute (where Saunders is a founding fellow), was recently called to our attention. In a feat of alchemy that would surely have been the envy of all those who in medieval times vainly sought the secret of transforming lead into gold, Saunders tells us that capitalist economies have no inherent need for economic growth or net capital formation. Rather, the capitalist economy, he assures us, is the best and fastest route to a zero-growth economy. But to achieve this capitalist zero-growth economy, what is needed first of all, even in a developed economy like the United States, is stronger economic growth in order to combat a universal “shortage of capital.” Exponential economic growth, we are led to believe, will eventually bring about an economic metamorphosis, inducing individual, satiated households to decrease their propensity to consume and to opt for a steady-state or zero-growth economy (“Episode 83: Harry Saunders, Managing Director of Decision Processes Incorporated,” My Climate Journey [podcast], February 20, 2020).

Saunders is an economist and a former strategic manager for the Tosco Corporation (then the leading U.S. independent oil refiner); a former assistant to the deputy executive director of the International Energy Association; and for years a private consultant to Gulf Oil and Gulf Canada. He also worked in the U.S. Department of Commerce in the Gerald Ford administration. He starts off his article on “Does Capitalism Require Endless Growth?” by criticizing “Marxist scholars like Paul Sweezy, Fred Magdoff and John [Bellamy] Foster” for advancing the notion of “‘the growth imperative of capitalism,’ by which they mean the indispensable necessity of capitalism to continually accumulate capital and generate a reserve army of unemployed workers if it is to remain viable.” In an effort to counter Sweezy, Magdoff, and Foster by referring to the “secular stagnation” of today’s capitalism (something he suggests they failed to perceive!), Saunders goes on to argue that the present long-term slowdown in the growth rates of the mature capitalist economies proves that capitalism is not inherently growth dependent or geared to capital accumulation. It is therefore necessary to set aside “the sweeping claims made originally by Sweezy, Magdoff and Foster and repeated today by prominent intellectuals and activists such as Naomi Klein and Bill McKibben.” The “growth theories” of neoclassical economics and “empirical evidence” (provided by stagnation) suggest that capitalism does “not require endless growth but…rather [is] much more likely to evolve toward a steady state.”

What exactly is capitalism for Saunders? For Marx, it was the system of class-based capital accumulation. Here, in contrast, is Saunders’s definition: “Capitalism, formally defined, is the economic system where the means of production resides in the hands of households.… In a capitalist economy households run the show…both as producers and…consumers.” Apparently, there is no actual capitalist class in the capitalist economy. Nor is there a working class. Indeed, there is no monopoly power. Corporations, judging by Saunders’s article, are apparently not worth mentioning at all. (Here, Saunders cannot be seen as just an ivory-tower neoclassical economist divorced from the real world, since much of his professional life has been devoted to working for oil corporations. All of this, though, is conveniently forgotten.) In Saunders’s capitalist economy, everything is determined by the private households that own the “means of production,” which, he says, include a majority of U.S. households (that is, if mostly meager retirement accounts, like 401ks, run by private pension funds, are included). The reason that capitalism will result in a zero-growth economy is that the households will find themselves eventually saturated with consumer goods and will decide that they simply have enough refrigerators, dishwashers, and large screen displays. This, coupled with slowing population growth, will do the trick. The advent of a zero-growth capitalist household economy will save the planet. It will also generate greater equality and will “eradicate” poverty. Meanwhile, rapid economic growth should be pursued along with new energy technologies (such as fourth generation nuclear power) and various market solutions as a means of ecomodernization within the confines of the present system.

“Capitalist economies,” Saunders concludes, “are more likely to achieve…low environmental impacts than just about any other economic system.” Here, “the bad conscience and evil intent of apologetics” comes into full play. Despite the fact that the capitalist accumulation system is literally, before our very eyes, destroying the planet as a safe home for humanity, threatening the lives of hundreds of millions, even billions, of people, and endangering the entire chain of human generations (as well as most species on the earth), we are told that it somehow promotes low environmental impacts. One can only wonder in these circumstances what Saunders thinks high environmental impacts would be, or how “just about any other economic system” could conceivably do worse than capitalism in this respect.

One of the important ecological concepts of our time, which arose from the labor movement, is the notion of a “just transition,” in which necessary changes in the economy to address environmental issues would occur in ways that also protect and promote the interests of workers (John Bellamy Foster, “Ecosocialism and a Just Transition,” MR Online, June 22, 2019). This crucial environmental principle is turned upside down in an August 16, 2021, article by Maya Anthony and Seaver Wang of the Breakthrough Institute, entitled “Whose Transition?: The Future of Coal and Self-Determination on the Navajo Nation.” Anthony and Wang argue that the actions of the semi-autonomous Navajo Transition Energy Co. (NTEC) in purchasing (unbeknown to the Navajo Nation) coal mines in Wyoming and Montana in 2019 to supplement the coal production on Navajo lands, making the Navajo Nation “America’s third-largest coal miner,” constituted a necessary part of a “just transition.” Much of this coal is being exported to Japan, where the utility company Jera has contracted to buy a million tons of coal a year from NTEC for the coal-fired plants that Japan is building in its Fukushima Prefecture to replace the nuclear reactors that melted down there in 2011 and are still releasing radioactive wastes into the ocean (“The Navajo Wanted to Go Green, Then This Surprise Deal Made Them America’s 3rd Largest Coal Miner,” Forbes, June 10, 2020). In their article, Anthony and Wang argue that a just transition for the Navajo in the face of a history of expropriation means that purchasing the coal mines in Wyoming and Montana was a justifiable green strategy and the Navajo may well need to extract even “more coal.” Indeed, a just transition for the Navajo, Anthony and Wang underscore, need “not meet strict non-extractive, zero-carbon criteria.” This argument, however, has one major flaw: it takes the permanency of the existing structure of colonialism and capitalism for granted, while ignoring the growing Indigenous-led environmental movement and its struggles in conjunction with the struggles of humanity as a whole, in defense of the earth.

An entirely different vision of a just transition for First Nations and for the population of the earth is provided in The Red Nation’s The Red Deal, which we recommend as an indispensable work for all environmentalists and socialists. As the Red Nation states:

The Red Deal…proposes a comprehensive, full-scale assault on capitalism, using Indigenous knowledge and tried-and-true methods of mass mobilization as its ammunition…[with] the abolition of capitalism via revolution as its central goal.

We must be straightforward about what is necessary. If we want to survive, there are no incremental or “non-disruptive” ways to reduce [carbon] emissions. Reconciliation with the ruling classes is out of question. Market-based solutions must be abandoned. We have until 2050 to reach net-zero carbon emissions. That’s it. Thirty years. The struggle for a carbon-free future can either lead to revolutionary transformation or much worse than what Marx and [Frederick] Engels imagined in 1848, when they forewarned that “the common ruin of the contending classes” was a likely scenario if the capitalist class was not overthrown. The common ruin of entire peoples, species, landscapes, grasslands, waterways, oceans, and forests—which has been well underway for centuries—has intensified more in the last three decades than in all of human existence.…

Our liberation is bound to the liberation of all humans and the planet.… We will organize to stop all forms of energy extraction from Native communities and lands, whether it is coal mining, fracking, or solar farms.… The struggle to remember our humanity through our love for the Earth will define the future for all. Join us. We are waiting for you, we welcome you, and we are ready to act. (The Red Deal: Indigenous Action to Save the Earth [Brooklyn: Common Notions, 2021], 21–22, 30, 116, 147)

Against Doomsday Scenarios: What Is to Be Done Now?
Socialism Against the Siege