Dear Reader, we make this and other articles available for free online to serve those unable to afford or access the print edition of Monthly Review. If you read the magazine online and can afford a print subscription, we hope you will consider purchasing one. Please visit the MR store for subscription options. Thank you very much. —Eds.
Documents
by Che Guevara and Leo Huberman
(Dec 01, 2021)
Topics: History Movements Revolutions Strategy Places: Americas Cuba United States 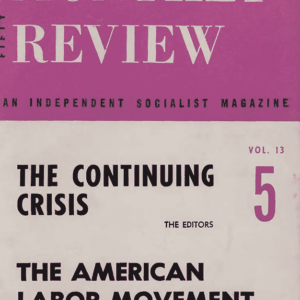 This exchange appeared in the September 1961 issue of Monthly Review. The questions were submitted, in writing, to Comandante Guevara by Leo Huberman during the week of the Bay of Pigs invasion; the answers were received at the end of June.

Leo Huberman: Have relations with the United States gone “over the brink” or is it still possible to work out a modus vivendi?

Che Guevara: This question has two answers: one, which we might term “philosophical,” and the other, “political.” The philosophical answer is that the aggressive state of North American monopoly capitalism and the accelerated transition toward fascism make any kind of agreement impossible; and relations will necessarily remain tense or even worse until the final destruction of imperialism. The other, political, answer asserts that these relations are not our fault and that, as we have many times demonstrated, the most recent time being after the defeat of the Girón Beach landing [the Bay of Pigs invasion], we are ready for any kind of agreement on terms of equality with the government of the United States.

LH: The United States holds Cuba responsible for the rupture in relations while Cuba blames the United States. What part of the blame, in your opinion, can be correctly attributed to your country? In short, what mistakes have you made in your dealings with the United States?

LH: Assuming that the United States means to smash the Cuban Revolution, what are the chances of its getting help from the Organization of American States (OAS)?

CG: Everything depends on what is meant by “smash.” If this means the violent destruction of the revolutionary regime with the help—likewise direct—of the OAS, I believe there is very little possibility, because history cannot be ignored. The countries of America understand the value of active solidarity among friendly countries, and they would not risk a reversal of such magnitude.

LH: Does Cuba align itself in international affairs with the neutralist or Soviet bloc?

CG: Cuba will align herself with justice; or, to be less absolute, with what she takes for justice. We do not practice politics by blocs, so that we cannot side with the neutralist bloc, nor, for the same reason, do we belong to the socialist bloc. But wherever there is a question of defending a just cause, there we will cast our votes—even on the side of the United States if that country should ever assume the role of defending just causes.

CG: It is difficult to assess problems with such precision. I can mention several: the guerrillerismo that still exists in the government; the lack of comprehension on the part of some sectors of the people of the necessity for sacrifice; the lack of some raw materials for industries and some non-durable consumer goods, resulting in certain scarcities; the uncertainty as to when the next imperialist attack will take place; the upsets in production caused by mobilization. These are some of the problems that trouble us at times, but, far from distressing us, they serve to accustom us to the struggle.

The defections of more or less prominent figures are due to the fact that the socialist revolution left the opportunists, the ambitious, and the fearful far behind and now advances toward a new regime free of this class of vermin.

LH: Can the countries of Latin America solve their problems while maintaining the capitalist system, or must they take the path of socialism as Cuba has done?

CG: It seems elementary to us that the way of the socialist revolution must be chosen, the exploitation of man by man must be abolished, economic planning must be undertaken, and all means of assisting the public welfare must be placed at the service of the community.

LH: Are civil liberties, Western style, permanently finished while your government is in power?

LH: What kind of political system do you envisage for Cuba after the present emergency period of reorganization and reconstruction is over?

CG: In general terms, it may be said that a political power which is attentive to the needs of the majority of the people must be in constant communication with the people and must know how to express what the people, with their many mouths, only hint at. How to achieve this is a practical task which will take us some time. In any event, the present revolutionary period must still persist for some time, and it is not possible to talk of structural reorganization while the threat of war still haunts our island.

View all posts by Che Guevara →