Dear Reader, we make this and other articles available for free online to serve those unable to afford or access the print edition of Monthly Review. If you read the magazine online and can afford a print subscription, we hope you will consider purchasing one. Please visit the MR store for subscription options. Thank you very much. —Eds.
Documents
by Che Guevara
(Dec 01, 2021)
Topics: History Imperialism Movements Revolutions Places: Americas Cuba Guatemala United States 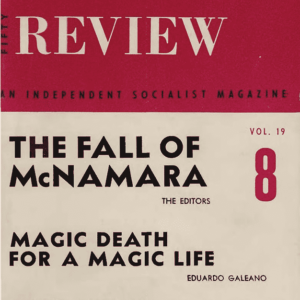 This article, which first appeared in the January 1968 issue of Monthly Review, was adapted from a chapter in Che Guevara’s Reminiscences of the Cuban Revolutionary War (Monthly Review Press, 1968).

A few days ago a cable brought the news of the death of some Guatemalan patriots, among them Julio Roberto Cáceres Valle.

In this difficult job of a revolutionary, in the midst of class wars which are convulsing the entire continent, death is a frequent accident. But the death of a friend, a comrade during difficult hours and a sharer in dreams of better times, is always painful for the person who receives the news, and Julio Roberto was a great friend. He was short and frail; for that reason we called him “El Patojo,” Guatemalan slang meaning “Shorty” or “Kid.”

El Patojo had witnessed the birth of our revolution while in Mexico and had volunteered to join us. Fidel, however, did not want to bring any more foreigners into that struggle for national liberation in which I had the honor to participate.

A few days after the Revolution triumphed, El Patojo sold his few belongings and, with only a small suitcase, appeared in Cuba. He worked in various branches of public administration, and he was the first Chief of Personnel of the Department of Industrialization of INRA (the National Institute of Agrarian Reform). But he was never happy with his work. El Patojo was looking for something different, he was seeking the liberation of his own country. The Revolution had changed him profoundly, as it had all of us. The bewildered boy who had left Guatemala without fully understanding the defeat had changed now to the fully conscious revolutionary.

The first time we met we were on a train, fleeing Guatemala, a couple of months after the fall of Árbenz. We were going to Tapachula, from where we could reach Mexico City. EI Patojo was several years younger than I, but we immediately formed a lasting friendship. Together we made the trip from Chiapas to Mexico City; together we faced the same problems—we were both penniless, defeated, and forced to earn a living in an indifferent if not hostile environment.

EI Patojo had no money and I only a few pesos; I bought a camera and, together, we undertook the illegal job [as foreigners, they did not have permission to work] of taking pictures of people in the city parks. Our partner was a Mexican who had a small darkroom where we developed the films. We got to know all of Mexico City, walking from one end to another, delivering the atrocious photographs we had taken. We battled with all kinds of clients, trying to convince them that the little boy in the photo was really very cute and it was really a great bargain to pay a Mexican peso for such a marvel. Thus we ate for several months. Little by little the contingencies of revolutionary life separated us. I have already said that Fidel did not want to bring him to Cuba, not because of any shortcomings of his, but so as not to turn our army into an international force.

EI Patojo had been a journalist, had studied physics at the University of Mexico, had left his studies and then returned to them, without ever getting very far ahead. He earned his living in various places, at various jobs, and never asked for anything. I still do not know whether that sensitive and serious boy was immensely timid, or too proud to recognize his weaknesses and his personal problems, to approach a friend for help. El Patojo was an introvert, highly intelligent, broadly cultured, sensitive. He matured steadily and in his last days put his great sensibilities at the service of his people. He belonged to the Partido Guatemalteco de Trabajo [Guatemalan Labor Party] and had disciplined himself in that life—he was developing into a fine revolutionary. By then, little remained of his earlier hypersensitivity. Revolution purifies men, improves and develops them, just as the experienced farmer corrects the deficiencies of his crops and strengthens the good qualities.

After he came to Cuba we almost always lived in the same house, as was proper for two old friends. But we no longer maintained the early intimacy in this new life, and I only suspected what was going on in his mind when I sometimes saw him earnestly studying one of the native Indian languages of his country. One day he told me he was leaving, that the time had come for him to do his duty.

EI Patojo had had no military training; he simply felt that duty called him. He was going to his country to fight, gun in hand, somehow to reproduce our guerrilla struggle. It was then that we had one of our few long talks. I limited myself to recommending strongly these three things: constant movement, absolute mistrust, and eternal vigilance. Movement: that is, never stay put; never spend two nights in the same place; never stop moving from one place to another. Mistrust: at the beginning, mistrust even your own shadow, friendly peasants, informants, guides, contacts; mistrust everything until you hold a liberated zone. Vigilance: constant guard duty, constant reconnaissance; establishment of a camp in a safe place and, above all, never sleep beneath a roof, never sleep in a house where you can be surrounded. This was the synthesis of our guerrilla experience, the only thing—along with a warm handshake—which I could give to my friend. Could I advise him not to do it? With what right? We had undertaken something at a time when it was believed impossible, and now he saw that it had succeeded.

EI Patojo left and, in time, the news of his death came. At the beginning we hoped that there had been a confusion of names, that there had been some mistake, but unfortunately his body had been identified by his own mother; there is no doubt that he is dead. And not only he, but a group of comrades with him, all of them as brave, as selfless, as intelligent perhaps as he, but not personally known to us.

Once again we taste the bitterness of defeat and we ask the unanswered question: Why did he not learn from the experience of others? Why did those men not heed more carefully the simple advice which was given? We still do not know exactly what happened, but we do know that the region was poorly chosen, that the men were not physically prepared, that they were not mistrustful enough and, of course, that they were not vigilant enough. The repressive army surprised them, killed a few, dispersed the rest, then returned to pursue them, and virtually annihilated them. They took some prisoners; others, like El Patojo, died in battle. After losing their unity, the guerrillas were probably hunted down, as we had been before [the battle of] Alegría de Pío.

Once again young blood has fertilized the fields of America, to make freedom possible. Another battle has been lost; we must make time to weep for our fallen comrades while we sharpen our machetes. From the valuable and tragic experience of the cherished dead, we must firmly resolve not to repeat their errors, to avenge the death of each one of them with many victories, and to bring about total liberation.

When El Patojo left Cuba, he left nothing behind, nor did he leave any messages; he had few clothes or personal belongings to worry about. However, old mutual friends in Mexico brought me some poems he had written and left there in a notebook. They are the last verses of a revolutionary; they are, in addition, a love song to the Revolution, the homeland, and to a woman. To that woman whom El Patojo knew and loved in Cuba, are addressed these final verses, this injunction:

El Patojo’s heart has remained among us, in the hands of his beloved and in the loving hands of an entire people, waiting to be warmed beneath the sun of a new day which will surely shine for Guatemala and for all America. Today, in the Ministry of Industry where he left many friends, there is a small school of statistics, called in his memory Julio Roberto Cáceres Valle. Later, when Guatemala is free, his beloved name will surely be given to a school, a factory, or a hospital, to any place where people fight and work in the building of a new society.

View all posts by Che Guevara →