Dear Reader, we make this and other articles available for free online to serve those unable to afford or access the print edition of Monthly Review. If you read the magazine online and can afford a print subscription, we hope you will consider purchasing one. Please visit the MR store for subscription options. Thank you very much. —Eds.
Notes from the Editors
by The Editors
(Mar 01, 2022)
Topics: Capitalism Education Labor Media Movements Political Economy Places: Americas United States 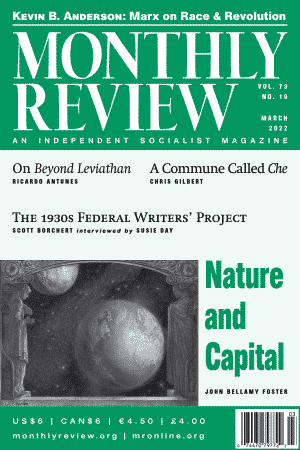 Public education—both in the United States and the world as a whole—is now experiencing a combined assault that in sheer scale, level of organization, and long-term implications is unlike anything seen before in this sphere. Not only are we witnessing the digitalization and marketization of schooling via the educational technology industry, but also accompanying attacks on academic freedom. The emphasis in education is increasingly on data collection via ubiquitous standardized testing and other means aimed at constantly assessing and altering the behavior of students while seeking to reduce teachers to appendages of artificial intelligence. This is closely linked to the penetration of surveillance capitalism—a term that first emerged in this magazine—into public schools (John Bellamy Foster and Robert W. McChesney, “Surveillance Capitalism,” Monthly Review [July–August 2014]). These changes are being ushered in politically by a broad neoliberal-right-wing alliance aimed at removing all ideas that are seen as standing in the way of existing realms of power and privilege, leading to repeated attacks on the autonomy of teachers and on teachers’ unions.

The corporate campaign to use digital technology and datafication as a means with which to financialize education is frequently packaged together with bans on critical thinking in schools. In a January 6, 2022, meeting with the North Carolina State Board of Education, state superintendent of public instruction Catherine Truitt declared: “We’ve got to redefine what the purpose of K–12 education is. Some would say it’s to produce critical thinkers. But my team and I believe that the purpose of a public K–12 education is to prepare students for the post-secondary plans of their choice so that they can be a functioning member of the workforce.” The significance of this statement lies not simply in its outright rejection of critical thinking as a goal of education, but also in the corporate trope that education needs to be principally concerned with producing functional members of the workforce—cheerful robots—for the monopoly-capitalist system. No mention of being a good citizen of the world.

Truitt, who exemplifies the negative economic and political trends that are currently restructuring education, is an opponent not only of critical thinking in general, but also, more pointedly, of “critical race theory,” viewed as any attempt to address the systematic nature of racism. She is an outspoken opponent of the rights of trans students in schools. One of her first acts in coming into office was to remove from the North Carolina Board of Education’s K–12 educational standards the word systematic before racism and discrimination, along with the word gender before identity. She is a fervent backer of the unlimited datafication of education directed at both students and teachers, and of full surveillance of classrooms (supporting legislation that would require teachers to post their lesson plans online). North Carolina is currently exploring a new system that would allow the state’s school districts to hire teachers without professional teaching licenses, and then make them pass through six tiers of licensure, to be determined largely through student outcomes as indicated by corporate-designed standardized tests/assessments (“State Superintendent Truitt Declares 2022 ‘The Year of the Workforce,” EdNC, January 7, 2022; “From Her Definition of Critical Race Theory, to ‘Bellyaching’ Teachers, Superintendent Truitt Gives Her View,” EdNC, June 15, 2021).

Similar developments are occurring in states throughout the United States. In Florida, legislation has been introduced that would allow school districts to put video cameras in classrooms and microphones on all teachers. In response to the droves of resignations by teachers faced with a deteriorating educational environment coupled with the COVID-19 pandemic, Michigan governor Gretchen Whitmer signed a bill allowing any school district employee (cafeteria workers, bus drivers, janitors, gardeners, clerical workers, and so on) with at least a high school diploma to serve as a substitute teacher. Eight states (Idaho, Iowa, New Hampshire, North Dakota, Oklahoma, South Carolina, Texas, and Tennessee) have banned critical race theory—in effect, all discussions of racism beyond the level of individual discrimination—from their schools. Arizona passed a law banning critical race theory that was overturned by its Supreme Court. Four other states—Alabama, Florida, Georgia, and Utah—have issued guidelines barring critical race theory discussions. Altogether, attempts have been made to ban references to systematic racism from public schools in 28 states, with about 165 conservative groups now dedicated to the effort. Some of these same organizations are also promoting the removal of hundreds of books dealing with race and gender from school libraries.

These combined attacks on schools are closely linked to attempts to destroy teachers’ unions. The National Parents Union, which is funded by the Walton Family Foundation, Charles Koch, Bill Gates, the Broad Foundation, and the Zuckerberg Initiative, has recently emerged as a leading organization engaged in assaults on teachers’ unions under the cover of a progressive, grassroots “parents’ revolution.” Similar anti-teacher positions are taken by Stand for Children, an organization masquerading as a supporter of child-focused education but funded by the Walton Family, Bill and Melinda Gates, and Bezos Foundations, and dedicated to the promotion of Charter Schools, the privatization of education, standardized testing, and the demolition of teachers’ unions (Maurice T. Cunningham, “School Privatization Week: Charles Koch Buys Into National Parents Union,” MassPoliticsProfs, January 28, 2022; “Stand for Children Has a Record of Winning Concessions,” Boston Globe, June 8, 2012).

Underlying these battles over education are shifts in power away from teachers by means of the digitalization and commodification of education. The ed-tech industry constitutes a $112 billion annual sales market. The commodity fetishism cultivated by the industry is exemplified by Gregory La Blanc, a lecturer in economic analysis and policy at the University of California at Berkeley, in a June 2020 talk sponsored by the French-American Chamber of Commerce in San Francisco. For La Blanc, drawing his example from higher education, students are not the “customers” of the education system, but its “products”—and corporations, as the real customers, have a right to know exactly what they are buying, down to the most detailed specifications. He argues that, at present, universities are hopelessly inefficient at collecting data on students. “Ten seconds spent on Facebook,” he explains, “captures probably a thousand times more data” for companies “than a university does in four years.” Right now, a potential corporate employer of a university graduate, he says, is offered only a few bytes of information with which to arrive at a hiring decision, but if “we could instrument the entire education process” to maximize datafication, that same employer could be presented with “ten gigabytes” of information on a prospective employee, allowing the corporate recruiters to “know everything about them.” This would provide “real value” to the buyers of the human capital. This is of course meant to refer also to the way K–12 education should be organized, with the raw human capital there being so configured as to provide real value to corporations (French-American Chamber of Commerce San Francisco, “France vs. California, Edition 4: What’s the Future of Education,” YouTube video, June 30, 2020).

Ed-tech companies are inherently data hungry. The new virtual education platforms being employed in primary and secondary education stipulate that they will use data and artificial intelligence to “disrupt” the educational environment, which they claim has failed, ostensibly providing a Silicon Valley-style education in its place. This involves using masses of data collected on each student for “personal learning” and achieving new, more favorable behavioral outcomes. In this regard, the whole U.S. K–12 education system is presently moving from technology platforms in classrooms, controlled by teachers, to classrooms themselves on technology platforms located on the corporate cloud, largely outside teachers’ control, a development further accelerated by the pandemic. The promise is to replace a human-intensive, teacher-based system with one that is primarily based on artificial intelligence, which is cheaper and more efficient, while creating economic value for the private sector. As Finnish professor of teacher education Marko Teräs and his colleagues have written, “It can be concluded that business-driven development of digital learning technologies and platforms is not primarily aimed at improving learning and teaching but at making profit.” For noted education critic Diana Ravitch, there are “five risks posed by the increasing misuse of technology in schools”: (1) the threat to student privacy; (2) the focus on mechanized “personalized learning”; (3) reliance on technology as the primary means of assessing students; (4) the replacement of public education with “cyber charter schools” dedicated to profits and accumulation; and (5) the ed-tech industry’s overpowering command over the education market (Marko Teräs et al., “Post-Covid-19 Education and Education Technology ‘Solutionism’: A Seller’s Market,” Postdigital Science and Education 2 [2020]: 868–69; Diane Ravitch, “Five Risks Posed by the Increasing Misuse of Technology in Schools,” EdSurge, December 29, 2017).

The use of digital technology to make students a mere appendage to digital platform capitalism, as part of “teaching in the fourth industrial revolution,” is necessarily accompanied by major ideological shifts. The weakening position of teachers and teachers’ unions in this rapidly changing environment has made them more vulnerable to right-wing and corporate attacks. As Prabhat Patnaik, writing in the Indian context, informs us:

The educational “reforms” we are witnessing today…are usually attributed to the changing requirements of the economic system. This is no doubt true, but in addition they are also meant to serve the needs of the new “Ideological State Apparatus,” to use Louis Althusser’s term, that must come into being to correspond to the change in the economic regime. The direction of the current education “reforms” is such that they serve both purposes: that is, they are in conformity with a changed totality. (“On the Political Economy of Educational ‘Reforms,’” Reconstructing Education [2013]: 3)

The struggle over schools today requires battles over both the privatization of education and the current attempts to limit its social content and meaning. Those fighting against this changing totality must align themselves with the embattled radical teachers in the trenches. In the famous words of Grace Lee Boggs, more than a half-century ago, it is necessary to create “a new system of education that will have as its means and its end the development of the great masses of people to govern over themselves and administer over things.” Education in this sense means the promotion of real democracy (Grace Lee Boggs, “The Great Obsession,” Monthly Review [September 1970]: 39).

Nature as a Mode of Accumulation: Capitalism and the Financialization of the Earth
Obfuscation