Dear Reader, we make this and other articles available for free online to serve those unable to afford or access the print edition of Monthly Review. If you read the magazine online and can afford a print subscription, we hope you will consider purchasing one. Please visit the MR store for subscription options. Thank you very much. —Eds.
by Ricardo Antunes
(Mar 01, 2022)
Topics: Capitalism Marxism Philosophy Political Economy Socialism Places: Global 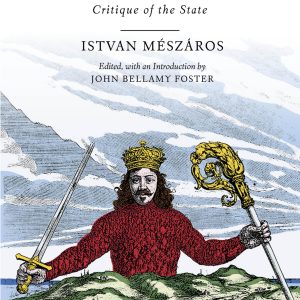 Beyond Leviathan: Critique of the State, by István Mészáros. Buy now at Monthly Review Press.

Ricardo Antunes is a professor of sociology of work at the University of Campinas, Brazil. He is the editor of Uberização, Trabalho Digital e Indústria 4.0 (Boitempo, 2020), and author of The Meanings of Work (Brill, 2013) and Coronavírus: o trabalho sob fogo cruzado (Boitempo, 2020), among others.

This is an extended version of the foreword to the Brazilian edition of István Mészáros, Beyond Leviathan: Critique of the State (Boitempo, 2021), a translation and adaptation of the English edition, edited and introduced by John Bellamy Foster and published in 2022 by Monthly Review Press.

In Beyond Leviathan: Critique of the State, István Mészáros closes a trilogy that was first outlined in Marx’s Theory of Alienation, later greatly developed in Beyond Capital, and is now concluded in this new work.

Throughout his immensely rich work, Mészáros developed, amid many original formulations, an increasingly relevant concept: capital’s order of social metabolic reproduction. The main inspiration here is the Karl Marx of Capital and, in the Mészárian formulation, the concept becomes decisive. This is, above all, because it is aimed at blocking capital’s most pernicious tendencies, which have deeply intensified since the emergence of capital’s structural crisis—another facet of Mészáros’s cutting-edge analysis that began to develop toward the end of the 1960s.

With these conceptualizations (and many others, outside of the scope of this piece), Mészáros was able to put forward this complex formulation, which we can synthesize by saying: Capital’s order of social metabolic reproduction is structured as a triad, constituted by wage labor, capital, and the state, which has become a powerful totalizing and even totalitarian system.

Mészáros reaches a caustic conclusion in his analyses: the elimination of this complex order is only possible by the extinction of these three elements that structure it. For Mészáros, capital’s order is even more powerful than capitalism itself—it is not enough to eliminate one or even two parts of the triad, because the social metabolic complex ends up restoring itself. The case of the Soviet Union, discussed in detail by Mészáros, is emblematic, and China today is an excellent opportunity for experimentation.

In his award-winning Marx’s Theory of Alienation, Mészáros detailed the fundamentals of wage labor. These do not result from an ontological unalterable determination, but are social-historical creations conceived by the hierarchical social division of labor, which consolidated the heteronomy of labor in relation to capital.

In Beyond Capital, his most powerful work (representing “almost a lifetime” of research), Mészáros tied together the main threads of his broad reflection, presenting the connections and interrelations in capital’s order of social metabolic reproduction that have made it imperatively expansionist and irretrievably destructive and uncontrollable.

The complete tragedy of the contemporary world is proof of the strength of Mészárian work. The ravages of nature, labor, and humanity speak for themselves. Social production, which had its genesis alongside humanity to fulfill its most vital needs, is completely surrounded by the imperatives and demands of capital’s self-reproduction, guaranteed by the destructive triad. It was precisely to better comprehend the third part of this triad—the state—that Mészáros engaged in his last intellectual project, Beyond Leviathan, closing his monumental trilogy.

In countless talks, meetings, and discussions we had over thirty-five years, I could witness the first reflections, the first handwritten drafts, the many revisions and extensions of what would be his “last book,” as he always said. This project was abruptly interrupted by his death on October 1, 2017, when he was still finishing the first part. It is worth remembering another personal note here: this project was not only his last wish, but also Donatella’s, as he always told me. His lifetime partner was always his first critical reader and was central to convincing him of the importance of writing a thorough contemporary study on the state.

One can have an idea of the project’s dimension based on its original plan alone, which included three volumes: (1) The Historical Challenge (three chapters); (2) The Harsh Reality (five chapters); (3) The Necessary Alternative (three chapters and a conclusion). The present volume is mostly based on the first part and also includes, in the appendix, the project’s original plan and other important texts that show the lineages and paths the project was meant to follow. Beyond Leviathan, therefore, must be read as a posthumous book, incomplete; a groundbreaking work, the breadth of which has been unseen in Marxism since Marx and Frederick Engels, given its scale.

As the project’s starting point, Mészáros took Marx’s first materialist critique of G. W. F. Hegel, which showed that the state would never be a political form capable of sublating the contradictions emerging in civil society, but, on the contrary, would become the political entity that would perpetuate domination. From there, Mészáros worked intensely, synthesizing the importance of the theme as follows: “a radical critique of the state in the Marxian spirit, with its far-reaching implications for the withering away of the state itself, is a literally vital requirement of our time. The state…cannot do other than protect the established social metabolic order, defending it at all cost, irrespective of the dangers for the future of humanity’s survival. This determination represents a mountain-size obstacle that cannot be bypassed in attempting the much-needed positive transformation of our conditions of existence” (Beyond Leviathan, 180).

In writing his last work, Mészáros left us an intellectual legacy as well as the lesson of a life entirely dedicated to substantive equality, human emancipation, and the urgency of the socialist alternative.

A necessary final note: This book is part of a broad effort that allowed the incorporation of the István Mészáros Archive into the University of Campinas in Brazil (Unicamp). In 2002, accepting our invitation to give a conference at Unicamp’s Institute of Philosophy and Human Sciences, Mészáros publicly announced that he would donate his library—totaling around ten thousand books, letters, manuscripts, and more—to Unicamp. After his death, this donation was made possible thanks to the decisive support of the São Paulo Research Foundation and to Unicamp’s workers, Marcelo Knobel (the then rector of Unicamp) and researcher Murillo van der Laan.

View all posts by Ricardo Antunes →

A Commune Called ‘Che’: A Socialist Holdout in the Venezuelan Andes
Nature as a Mode of Accumulation: Capitalism and the Financialization of the Earth