Dear Reader, we make this and other articles available for free online to serve those unable to afford or access the print edition of Monthly Review. If you read the magazine online and can afford a print subscription, we hope you will consider purchasing one. Please visit the MR store for subscription options. Thank you very much. —Eds.
Poetry
by Pablo Neruda
(Mar 01, 2022)
Topics: Ecology Imperialism Monopoly Political Economy Places: Africa Americas Latin America 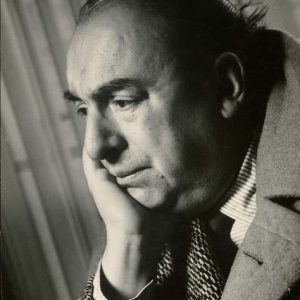 When the trumpets had sounded and all
was in readiness on the face of the earth,
Jehovah divided his universe:
Anaconda, Ford Motors,
Coca-Cola Inc., and similar entities:
the most succulent item of all,
The United Fruit Company Incorporated
reserved for itself: the heartland
and coasts of my country,
the delectable waist of America.
They rechristened their properties:
the “Banana Republics”—
and over the languishing dead,
the uneasy repose of the heroes
who harried that greatness,
their flags and their freedoms,
they established an ópera bouffe:
they ravished all enterprise,
awarded the laurels like Caesars,
unleashed all the covetous, and contrived
the tyrannical Reign of the Flies—
Trujillo the fly, and Tacho the fly,
the flies called Carías, Martínez,
Ubico—all of them flies, flies
dank with the blood of their marmalade
vassalage, flies buzzing drunkenly
on the populous middens:
the fly-circus fly and the scholarly
kind, case-hardened in tyranny.
Then in the bloody domain of the flies
The United Fruit Company Incorporated
sailed off with a booty of coffee and fruits
brimming its cargo boats, gliding
like trays with the spoils
of our drowning dominions.

And all the while, somewhere, in the sugary
hells of our seaports,
smothered by gases, an Indian
fell in the morning:
a body spun off, an anonymous
chattel, some numeral tumbling,
a branch with its death running out of it
in the vat of the carrion, fruit laden and foul.

View all posts by Pablo Neruda →