Dear Reader, we make this and other articles available for free online to serve those unable to afford or access the print edition of Monthly Review. If you read the magazine online and can afford a print subscription, we hope you will consider purchasing one. Please visit the MR store for subscription options. Thank you very much. —Eds.
Poetry
by Raymond Nat Turner
(Mar 01, 2022)
Topics: Capitalism Culture Democracy Media Movements Political Economy Places: Americas United States 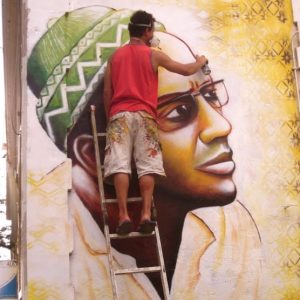 “When buying and selling are controlled by legislation, the first things to be bought and sold are legislators.”

I lied.
I keep my eyes on the prize—
and during this most trying time
I can’t be seen as soft on crime…

I’m throwing my hat in the ring
for a run for the mayor—Because
really, it’s from there… I can have a
Bully pulpit—A really good fit—
And get out from under the gun—And
really get some things done—Making
meaningful, impactful policy that will
Help our people—All People!

Whoa, now, what’s with that sigh?
Where’s the nuance? Your silly lil
communist sigh tells me that you
don’t understand politics as the art of
Compromise—“tell no lies—claim no easy victories…”
I’m about change you can believe in—not some damn
sweet potato pie up in the sky…