Dear Reader, we make this and other articles available for free online to serve those unable to afford or access the print edition of Monthly Review. If you read the magazine online and can afford a print subscription, we hope you will consider purchasing one. Please visit the MR store for subscription options. Thank you very much. —Eds.
Notes from the Editors
by The Editors
(Oct 01, 2022)
Topics: Ecology History Places: Americas Global United States 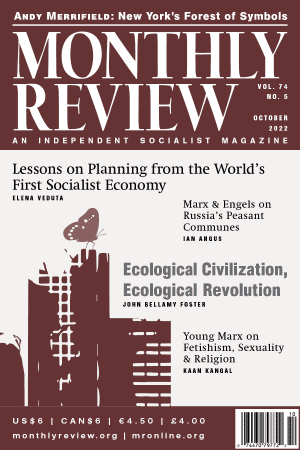 This year is the fiftieth anniversary of one of the most influential, and also controversial, environmental studies ever written: The Club of Rome’s report, The Limits to Growth (New York: Universe, 1972) by Donella H. Meadows, Dennis L. Meadows, Jørgen Randers, and William W. Behrens III. No other environmental work of the 1970s offered such a direct challenge to the underlying assumptions of capitalist neoclassical growth economics or was responded to so vehemently by establishment thinkers.

The Limits to Growth employed a formal mathematical-computer model to present twelve scenarios on economic growth trends and their environmental consequences. In doing so, the report focused on five growth factors: population, food production, industrialization, pollution, and consumption of nonrenewable natural resources. In what was called the “standard run” scenario, as well as most of its other scenarios, the projected result was “overshoot” and collapse of the growth trends sometime in the twenty-first century. Nevertheless, The Limits to Growth was not meant to be predictive in any strict sense, but rather to point to the fundamental environmental dangers resulting from the growth dynamics of contemporary industrialized societies. The message of The Limits to Growth in 1972, developed further in follow-up studies up to the present, was thus one of needed transformation to create more sustainable development paths. As stated in the introduction:

Various criticisms can be leveled at The Limits to Growth report, not least of all its failure to address the realities of capitalism as a socioeconomic system. The report also focused too much on the tap side of the environmental problem, and not enough on the sink end (aggregate data on pollution at the time was insufficient to make a strong case in that regard). While it dealt with the rapid buildup of carbon dioxide in the atmosphere, it did not directly address concerns associated with climate change, something that was to be rectified in later studies (See Donella H. Meadows, Dennis L. Meadows, and Jørgen Randers, Beyond the Limits [White River Junction, VT: Chelsea Green, 1993]). Nevertheless, the general message of The Limits to Growth is not to be faulted, namely that humanity, if it is to save itself, must enter “a period of great transition,” the “transition from growth to…a desirable, sustainable state of global equilibrium” (24, 180).

As Dennis Meadows indicated in an interview published in August 2022 on MR Online, recent studies have strongly confirmed The Limits to Growth’s standard-run scenario, in which the various growth factors were expected to peak around 2020, with an inexorable decline in growth factors setting in during the next decade and half, leading to conditions of economic and environmental collapse by the mid-twenty-first century (Graham M. Turner, “Comparison of the Limits to Growth with 30 Years of Reality,” Global Environmental Change [2008]; Gaya Herrington, “Data Check on the World Model that Forecast Global Collapse,” July 26, 2021). These conclusions are backed up by a new Club of Rome report, Earth for All: A Survival Guide for Humanity (Gabriola, BC: New Society Publishers, 2022), the authors of which include Randers from the original Limits to Growth report, as well as economist and Monthly Review author Jayati Ghosh (see Jayati Ghosh, “Achieving the Earth for All,” Project Syndicate, July 12, 2022). Given today’s planetary ecological crisis resulting from exponential growth in capital accumulation, it is abundantly clear that the world should have heeded the warnings of The Limits to Growth a half-century ago.

Still, the actual computer-derived scenarios provided by The Limits to Growth in 1972 are arguably much less important today—since so strongly confirmed over the last half-century with respect to their general projections—than some of the wider social messages that were offered by the report, regarding how to address the necessary political-economic and ecological transformations. Here, two core elements of the original argument stand out. The first was the devastating critique of technological optimism, which served as a major ideological barrier to conceiving the seriousness of the problem and taking the needed social, economic, and environmental actions. As The Limits to Growth explained, the path towards environmental crisis and collapse was due to: (1) a socioeconomic system geared to exponential growth that threatened to transgress the physical limiting factors of the planet itself, and (2) technology expressly designed to pursue that same course of exponential growth, which would inevitably prove ineffective and disastrous. Such standard, growth-oriented technologies might be slightly modified so as to delay the inevitable, but they could not alter the underlying problem the world faced with its multiple planetary limits. This position did not exclude new, qualitatively different technologies from playing a significant role in addressing the problem, but it stressed that these technologies would have to be developed and employed in pursuit of changed social and environmental ends, as what was required was a great transition in society itself, abandoning the goal of unlimited growth in capital accumulation.

The second, and even more important, lesson that The Limits to Growth conveyed was that “growth,” as it had come to be conceived of in present-day society, referred to growth in quantitative Gross National Product, along with growth in resource use and population, all of which were being pursued by the capitalist world economy on an exponentially increasing basis. It was “growth” in this narrow sense of capital accumulation that was limited. But this did not mean that the same limitations applied to growth conceived in a far wider sense, encompassing sustainable human development, qualitative improvements of all kinds, and genuine improvements of productivity—not to mention human-enhanced sustainable growth within nature itself. As Donella Meadows and her colleagues wrote in 1972 in The Limits to Growth, “Any human activity that does not require a large flow of irreplaceable resources or produce severe environmental degradation might continue to grow indefinitely” (175).

We are happy to announce that MR editor John Bellamy Foster’s book, The Return of Nature: Socialism and Ecology (Monthly Review Press, 2020), which previously won the 2020 Isaac and Tamara Deutscher Memorial Prize, has been granted the 2022 Paul M. Sweezy Outstanding Book Award from the Section on Marxist Sociology of the American Sociological Association. In the presentation of the award in August, The Return of Nature was celebrated for offering “an in-depth historical analysis of how Marx’s open, dialectical, materialist analysis has been engaged and developed throughout the nineteenth and twentieth centuries, in debates focused on gender, race, and environment.” It was said to provide “a rich, fascinating narrative, demonstrating the broad range of people and historical circumstances that contributed to an integrated socioecological analysis,” while explaining “how socialism, the critique of capital, and Marxism in general have been central to the development of ecology as a science.” The presentation noted that Foster had earlier received the same award from the Section on Marxist Sociology for his book, Marx’s Ecology: Materialism and Nature (Monthly Review Press, 2000), where he “established a strong foundation for ecological Marxism, revealing Marx’s materialist conception of nature and history, metabolic analysis, and ecological critique of capitalism.” Together these works, it was declared, had “transformed both Marxist scholarship and environmental sociology,” while “greatly enhancing” the Marxist tradition “as a whole.” Congratulations, John!