Dear Reader, we make this and other articles available for free online to serve those unable to afford or access the print edition of Monthly Review. If you read the magazine online and can afford a print subscription, we hope you will consider purchasing one. Please visit the MR store for subscription options. Thank you very much. —Eds.
Review
by Mariko Frame
(Nov 01, 2022)
Topics: Capitalism Ecology Economic Theory Political Economy Places: Global 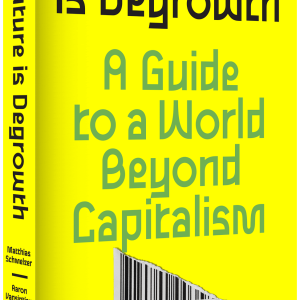 Mariko Frame is an assistant professor of economics at Merrimack College and the author of Ecological Imperialism, Development, and the Capitalist World-System: Cases from Africa and Asia (Routledge, 2022).
The Future Is Degrowth: A Guide to the World Beyond Capitalism, by Matthias Schmelzer, Andrea Vetter, and Aaron Vansintjan (London: Verso Books, 2022), 297 pages, $26.95, paperback.

In the face of global socioecological crises, envisioning alternative futures that are realistic and desirable, yet also address the urgency and scope of these crises, is a daunting endeavor. As degrowth theorists and activists argue, at the root of our multiple, interlinked, and accelerating crises is a socioeconomic system driven by endless economic growth. The consequence of this growth—the excessive material throughput of countries in the Global North—is but the tip of the iceberg. Behind this growth stands the drive for the ceaseless accumulation of capital, itself built upon a constellation of exploitative relations. The Future Is Degrowth: A Guide to the World Beyond Capitalism, by Matthias Schmelzer, Andrea Vetter, and Aaron Vansintjan, is a welcome addition to both untangling the capitalist relations that underpin growth while tackling the formidable task of envisioning a degrowth future that will entail massive and systemic changes.

The stated mission of the book, per the back cover, is to “provide a vision for postcapitalism beyond growth, charting a path forward through policies that democratize the economy, ‘now-topias’ creating free spaces for experimentation, and counter-hegemonic movements making it possible to break with the logic of growth.” Overall, the approach of the book to these challenging aims is thoughtful, nuanced, and holistic. The book is a much-needed contribution to what one could characterize as genuine “systems-thinking”—engaging history, economics, sociology, political economy, feminist critiques, neocolonial analysis, empirical treatments of social metabolism, and more. As such, it avoids reductionist or naïve solutions to problems that are complex and systemic. Further, the book promotes a solidly critical and justice-oriented vision of degrowth, addressing the concerns of those skeptical that degrowth does not sufficiently confront the realities of capitalism, neocolonial relations, patriarchy, race, or other forms of inequality and injustice. In addition, the vision it offers for degrowth explicitly leaves room for a multiplicity of voices and perspectives, thereby avoiding a totalizing, one-size-fits-all blueprint for humanity. All of the above issues constitute difficult waters, which the authors navigate well.

The first several chapters of the book provide a good introduction to the topic of degrowth, which is a burgeoning movement with hundreds of academic articles already in the literature, plus numerous activist-related initiatives. To the uninitiated, the degrowth movement can seem a bewildering smorgasbord of eclectic viewpoints. The book provides a valuable service to the less familiar reader through summarizing and categorizing the main strands of the degrowth vision in an accessible way. For example, it offers a good overview of the extensive literature criticizing growth from multiple perspectives, ranging from ecological to socioeconomic to feminist, among others. It also provides a survey of the history of the degrowth movement itself.

Importantly, the opening chapters of the book summarize and patiently address some of the main criticisms and misconceptions of degrowth from across the political spectrum. A common refrain from the right is the accusation that degrowth is a proposal for austerity and recession, or that degrowth would result in economic collapse. Yet Schmelzer, Vetter, and Vansintjan point out that degrowth is the opposite of these issues in a number of crucial ways. Recessions are unintentional, make inequality worse, result in cuts in public services, and often lead to the abandonment of sustainability policies for the sake of restarting growth. In contrast, degrowth is a planned and intentional agenda of sustainability that, from the get-go, focuses on reducing inequality and decommodifying essential goods and services. Unlike capitalism, which lurches from crisis to crisis and is rapidly leading us to ecological collapse, degrowth is a “multidimensional set of transformations based on sufficiency, care, and justice.”1 The book also addresses a critique that crops up among the political left: that degrowth will result in the replication of neocolonial relations with the Global South. Degrowth, according to the authors, starts explicitly from a global justice perspective that aims to transform the Global North so as to make space for the Global South, with the aim of a convergence of living standards at an equitable and globally sustainable level.

The second half of the book moves substantially beyond this introduction. In chapter 5 of the book, Schmelzer, Vetter, and Vansintjan undertake one of the more difficult challenges of the degrowth movement, considering the policies that could make degrowth a reality. Again, they approach this task in a systematic and holistic manner. They focus on six transformational changes: democratizing the economy, redistribution and social security, democratizing technology, revaluation of labor, democratization of the social metabolism, and international solidarity, for which they give detailed descriptions and examples. For example, democratizing the economy, according to the authors, involves creating a new postcapitalist economy that is “diverse, social-ecological, democratic and participatory, cooperative, needs-oriented, open but regionally anchored and oriented towards overcoming the distinction between production and reproduction.”2 Schmelzer, Vetter, and Vansintjan cite a wide variety of initiatives as examples, from collectively administered common property (and commoning projects), the solidarity economy, community-supported agriculture, and cooperatives, to putting utilities into the hands of municipalities so they can be more transparent and democratically run. In sum, the economic democracy of degrowth aims to dismantle the concentrated economic power that currently lies in the hands of a few corporations and to enable people to actively participate in economic decision-making, both at the macro and micro level.

In chapter 6, Schmelzer, Vetter, and Vansintjan move on to theorize a strategy for societal change. They distinguish three different, complementary transformation strategies: interstitial strategies, non-reformist reforms, and building counter-hegemony and parallel institutions of power. Interstitial strategies, according to the authors, are strategies that do not follow the logics of capitalism, growth, and competition within existing structures. The examples they give of interstitial strategies include “really-existing” alternative institutions such as cooperatives and community-based organizations—in other words, already existing “now-topias” such as Calafou, a postcapitalist eco-industrial colony in the Catalonian countryside. Such alternative institutions, the authors argue, allow people to “test changes to institutions, infrastructures, or forms of social organization in the cracks of capitalism.”3 In contrast, nonreformist reforms aim to transform policies and institutions and fundamentally democratize the economy. Put more simply, nonreformist reforms are about changing institutions and policies that move us further on the path toward a sustainable and socially just degrowth. The authors list a wide variety of nonreformist reforms, including reduction of working hours, radical policies of redistribution, universal basic services, and ecological tax reform, among others. Finally, strategies for building counter-hegemony and parallel institutions of power include confrontational tactics such as strikes, blockages, citizen assemblies, alternative forms of government, and other strategies, such as creating movements in civil society and transforming our ideas of what is desirable and possible. In many ways, chapter 6 is one of the most impressive chapters of the book, as it once again avoids reductionism through reconciling counter-hegemonic strategies that are seemingly opposed to one another (such as the focus on top-down policy proposals in contrast to bottom-up alternatives that function outside of the sphere of the state). Instead, the authors recognize the limitations of any single strategy, while demonstrating instead the necessity of multiple forms of strategy that complement and strengthen each other.

There are some limits to the scope of the book in regard to specific and important areas that the degrowth movement as a whole must ultimately address. In the authors’ defense, however, the limitations reflect broader gaps in the degrowth literature of which the authors are well aware. In the concluding chapter, the authors outline these gaps with a call for further work in these areas, one being geopolitics and imperialism. Along the lines of geopolitics and imperialism (which are addressed, in a limited way, in certain sections of the book) is the need for greater scrutiny of the global economy in the degrowth literature. While degrowth centers on the Global North, as the authors themselves repeatedly stress, growth in the Global North is built upon relations of neocolonialism and imperialism with the Global South. This is a significant point. As numerous studies have found, the unsustainable appropriation and consumption of the Earth’s resources by the Global North is built upon ecologically unequal exchange and ecological debt with the Global South. These processes occur through none other than the mechanisms of global economic integration and the influence of the prominent, growth-oriented international institutions that control the foundational policies and architecture of the global economy. As such, a truly comprehensive and realistic vision of degrowth must expand its unit of analysis from the national economies of the Global North to one that squarely tackles the expansionary dynamics of capitalism as it operates in a hierarchical capitalist world-system.

View all posts by Mariko Frame →