Dear Reader, we make this and other articles available for free online to serve those unable to afford or access the print edition of Monthly Review. If you read the magazine online and can afford a print subscription, we hope you will consider purchasing one. Please visit the MR store for subscription options. Thank you very much. —Eds.
Notes from the Editors
by The Editors
(Jul 01, 2019)
Topics: Imperialism Inequality Places: Global 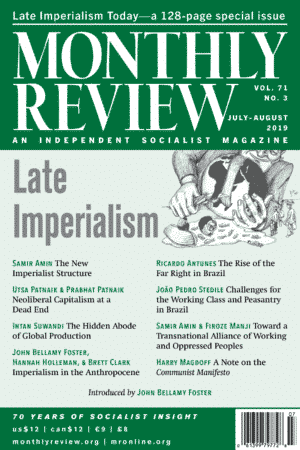 Cover image: “Trump” by Stefan Gua. Gua is a Mauritian artist and political activist who believes that art should be a crucial element in building movements for change. He works with Rezistans ek Alternativ fighting for system change in Mauritius and the Indian Ocean region, which is increasingly threatened by gentrification and ecological crisis.

This special issue of Monthly Review is meant both to celebrate the fiftieth anniversary of Harry Magdoff’s The Age of Imperialism: The Economics of U.S. Foreign Policy, which was devoted to the analysis of imperialism at the height of U.S. hegemony, and to carry this analysis forward to address the present era of late imperialism in the twenty-first century. In bringing together work on the political economy of imperialism in the current era of globalized production, we seek to transcend the now fashionable view within the Western academic left that the concept of imperialism is obsolete. The imperialist world system stands not only for capitalism at its most concrete historical level, but also for the entire dynamic structure of power constituting accumulation on a world scale, which can only be understood in terms of a developing global rift between center and periphery, global North and global South. Failure to attend to this fissure would be fatal for humanity. Here, V. I. Lenin’s conclusion to his 1920 “Preliminary Draft Theses on the National and Colonial Question” retains all its validity in our time: “Complete victory over capitalism cannot be won unless the proletariat, and, following it, the mass of working people in all countries and nations throughout the world voluntarily strive for alliance and unity” (Selected Works in Three Volumes, vol. 3, 377–78).

In the November–December 2018 issue of New Left Review (NLR), Dylan Riley, a University of California, Berkeley sociologist and member of the NLR editorial committee, wrote an article for the journal called “What Is Trump?” In late December, critical left commentator Richard Seymour responded to Riley in a blog post on Patreon titled “What Trump Isn’t.” Both pieces—Riley’s directly and Seymour’s indirectly—fault Monthly Review editor John Bellamy Foster in his book Trump in the White House (Monthly Review Press, 2016) for associating the Trump White House with neofascism. Foster is criticized by Riley for arguing that, despite the acknowledged “‘historically distinct features,'” separating the 1930s from the present, “Trump is…a systematic ‘neofascist,’ who like his interwar forebears aims at ‘the repression of the workforce'” (6). Seymour, conveying what he takes to be Riley’s views (without questioning them in this respect), states: “Madeline Albright, Timothy Snyder [a Yale historian and member of the Council on Foreign Relations], and John Bellamy Foster all agree on this premise”—that “the Left needs to align itself with the Democratic Party, the liberal state and the governing centre. Everything has to be subordinated to the single overarching strategic goal of rescuing the office of the presidency from this vulgar Duce.”

In fact, Riley strongly condemns Foster and others on the left, like Judith Butler, on the grounds that simply by referring to the Trump White House as fascist or neofascist they are thereby politically supporting “uniting behind the program of the present Democratic [Party] leadership.” In an attempt to prove this, Riley pronounces: “The logic of what was once called popular frontism can be seen most clearly where it is resisted” (emphasis added). The one example he gives of such resistance—supposedly offering support for his view that an alignment with the Democratic Party leadership is actually being advanced on the left—is Foster’s declaration in his book that a political strategy of cooperation between establishment liberals and the left “is only practical to a limited extent in certain areas,” such as defending civil rights. It is, then, Foster’s very resistance to an overall alliance between the left and liberalism that Riley offers as his evidence of a call by Foster and others on the left to get “behind” the likes of “Pelosi, Schumer, the Clintons, the Obamas and other superintendents of the oligarchic order” in the name of fighting fascism (29–30). Not only are Riley’s claims here clearly contradicted by his alleged evidence, but it should also be evident that the attribution of such views to Foster, or anyone else writing for Monthly Review or Monthly Review Press, is outlandish to an extreme, both uncomprehending and incomprehensible.

Most of Riley’s twenty-six-page article consists of arguing that, since conditions almost a century later are obviously quite different than they were in the 1920s and ’30s, there cannot be any relation whatsoever between fascism in the 1920s and ’30s and new right politics today. Apparently, fascism, unlike all other political movements and ideologies, cannot, in his view, reappear in new forms under changed conditions, but rather can support only one variety frozen forever in time—as if it were not in reality a phenomenon regularly churned up, in different forms, by the very logic of monopoly capitalism itself.

Things get even more complicated when the class basis of fascism is raised. In Marxist theory, whether one looks at Georgi Dimitrov, Leon Trotsky, Paul Sweezy, Franz Neumann, Nicos Poulantzas, or, in this case, Foster, the underlying notion of the class basis of fascism is the same: an alliance between the upper echelons of monopoly capital and the petty bourgeoisie or lower-middle class. This naturally can be added to and refined in various ways. As Foster argues in Trump in the White House, a key element is whether the lower-middle class, called by C. Wright Mills in White Collar the “rearguarders” of capitalism, are mobilized in terms of their own distinct ideology and interests. For Riley, the lower-middle class underpinnings of the rise of fascist movements under Benito Mussolini and Adolf Hitler are clear (if not their connection to big capital). However, he says that Trump’s own base of support is the “white working class,” not the lower-middle class as in fascism, so Trumpism does not fit the definition. It is here that Seymour steps in to challenge Riley’s recourse to the “legend of the ‘white working class'” in explaining the Trump phenomenon, arguing that this obfuscation, promoted by the likes of the New York Times, is just as “politically questionable” as the direct identification of Trump and Hitler. Rather, according to Seymour, Trump draws most heavily on the lower-middle class and the Republican Party constituency in general.

But the question that Riley has chosen to raise remains: What is Trump? Here he takes a leaf out of Max Weber’s vast compendium in Economy and Society and says that Trumpism is based on the “patrimonial household,” that is, a political formation in which personal interests associated with family income/wealth/household head at the very top of society and state rule become indistinguishable, running into each other (26). Following Weber, he traces patrimonial domination to traditional, precapitalist societies, with its locus classicus in European history to be found in the later Roman Empire and early medieval periods. Nevertheless, it does not seem to occur to Riley that historical conditions have changed quite a bit since the days of Claudius or Charlemagne—much more in fact than since the 1930s. To say that the Trump administration is simply an exercise of patrimonial rule is to deny the existence of the entire structure of the capitalist, and particularly monopoly-capitalist, economy and state.

Seymour, for his part, suggests that we are not dealing with fascism or neofascism but “pre-fascism”—a position that is sensible insofar as it recognizes that we are now increasingly faced with movements within the fascist genus. It should be axiomatic on the left that opposition to fascistic tendencies, whether these are seen as prefascism, classical fascism, neofascism, postfascism, peripheral fascism, neoliberal fascism, or national populism—you may take your pick—is now imperative. The only effective way of eradicating movements in the fascist genus is by opposing capitalism itself, the system from whence they invariably arise.

Awards and honors in the political and intellectual world, since they necessarily pass through the prisms of money, class, and status, tend to reflect privilege. Such awards are much more prevalent in the case of those advancing establishment views and occupying advantaged positions. Conversely, those who are dissidents often strive simply to exist and be heard. It is therefore significant that our colleague and MR editor John Bellamy Foster has received two career awards this year: The Lifetime Achievement Award from the Section on Marxist Sociology of the American Sociological Association, and the Outstanding Career Award from the University of Oregon—the highest award offered by the university. The bulk of Foster’s work over the course of his career has been associated with Monthly Review. Notification of both awards came when the seventieth anniversary issue of Monthly Review was in press. These awards, along with others, such as Kohei Saito’s winning of the most recent (2018) Deutscher Memorial Award for his book, Karl Marx’s Ecosocialism, therefore signify the continuing vitality of the MR tradition and community, and the cumulative buildup of a powerful body of critical analysis since 1949, when the magazine was founded. This constitutes a fitting tribute to the MR tradition as a whole.

We are happy to announce that Hannah Holleman, a member of Monthly Review‘s editorial committee, a director of the Monthly Review Foundation, and a contributor to this issue has been elected chair-elect of the Section on Marxist Sociology of the American Sociological Association for 2019. Congratulations, Hannah!