Dear Reader, we make this and other articles available for free online to serve those unable to afford or access the print edition of Monthly Review. If you read the magazine online and can afford a print subscription, we hope you will consider purchasing one. Please visit the MR store for subscription options. Thank you very much. —Eds.
Notes from the Editors
by The Editors
(May 01, 2020)
Topics: Agriculture Ecology Economic Crisis Health Inequality Political Economy Places: Global 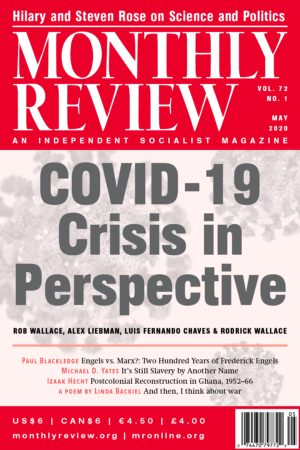 More than a century ago, the British zoologist E. Ray Lankester, Charles Darwin and Thomas Huxley’s protégé and Karl Marx’s close friend, warned in The Kingdom of Man that the causes of the spread of disease in the modern world were largely the result of the human alteration of natural relations through “restless and ignorant activity.” A strong critic of capital, Lankester contended, in a chapter entitled “Nature’s Revenges: The Sleeping Sickness,” that modern epidemics of various kinds (affecting organisms generally, including human beings) could be traced to the fact that in “his greedy efforts to produce large quantities of animals and plants…man has accumulated unnatural swarms of one species in field and ranch and unnatural crowds of his own kind in towns and fortresses.” The source of the problem lay in a world dominated by “markets” and “cosmopolitan dealers in finance” (Lankester, The Kingdom of Man [New York: Henry Holt and Company, 1911], 31–33, 184–89; John Bellamy Foster, The Return of Nature [New York: Monthly Review Press, 2020], 61–64).

Lankester’s warnings were largely ignored by a system that puts profit before people and the planet. Nevertheless, twenty years ago, ecologist Richard Levins raised the alarm again in his article “Is Capitalism a Disease?” in Monthly Review. Inquiring why public health officials in the late twentieth century assumed that infectious disease would go away, and thus were unprepared for “the appearance of apparently new infectious diseases: the most threatening of which is AIDS, but also Legionnaire’s disease, Ebola virus…and many others,” Levins argued that “conventional public health failed to look at world history, to look at other species, to look at evolution and ecology, and, finally, to look at social science” (“Is Capitalism a Disease?,” Monthly Review 52, no. 4 [September 2000]: 9, 14; see also Richard Lewontin and Richard Levins, Biology Under the Influence [New York: Monthly Review Press, 2007], 297–319).

More recently still, in the major work Big Farms Make Big Flu (New York: Monthly Review Press, 2016), evolutionary biologist and public health phylogeographer Rob Wallace, writing in the same vein as Lankester and Levins, introduced a powerful argument on the role of imperial agribusiness in inducing ecological degradation, emergent diseases, and potential global pandemics. In a chapter called “The Great Bird Flu Blame Game,” Wallace explained that the entire structure of neoliberal agribusiness needed to be confronted if such emerging pandemics were to be stopped. On top of that:

Global public health capacity must…be rebuilt. That capacity is only the most immediate remediation for the poverty, malnutrition, and other manifestations of structural violence that promote the emergence and mortality of infectious diseases, including influenza. Pandemic and inter-pandemic flu have the greatest impact on the poorest. And, as for any infection, a threat to one is a threat to all.

Only once these objectives are fulfilled will we be able to cover ourselves against H5N1 and the other influenza serotypes—H5N2, H6N1, H7N2, H7N7, H9N2—now lining up across factory farms like tropical depressions in the ocean. (Big Farms Make Big Flu, 29)

In this issue of Monthly Review, Rob Wallace, teaming up with Alex Liebman, Luis Fernando Chaves, and Rodrick Wallace, has extended this analysis to address “COVID-19 and Circuits of Capital: New York to China and Back.” Putting the current pandemic in its wider economic, ecological, epidemiological, and public health context, the authors demonstrate the enormous dangers of the metabolic rift in human ecology and epidemiology brought on by capitalist social relations in the age of monopoly-finance capital, global agribusiness, and intricate, globe-spanning supply chains associated with the extreme exploitation and expropriation of both human beings and nature. Moreover, neoliberalism, representing the inner logic of capitalism, has left the world vulnerable to catastrophe wherever it has come into play. In the case of the United States, “a regimen of individualized, just-in-time epidemiology—an utter contradiction—…is by definition unable to marshal the resources necessary to pursue a China brand suppression” of the novel coronavirus (SARS-CoV-2 or SARS-2). At a causal level, the current coronavirus pandemic is the product of just one of a growing number of zoonotic pathogens being introduced by a food chain governed by global agribusiness. Finally, attempts to protect financial assets and capital accumulation by an extended “toggling in and out of community quarantine,” while failing to carry out a policy of suppression of the virus, threatens the projected deaths of hundreds of thousands and perhaps more than a million people in the United States, along with millions globally.

As all of these socialist scientists suggest, capitalism itself is now the main disease vector globally. The answers to this problem lie in what Marx and Frederick Engels once referred to as “the revolutionary reconstitution of society at large” (Marx and Engels, The Communist Manifesto [New York: Monthly Review Press, 1968], 2). It is a time once again for fundamental change of a kind that has occurred at various epoch-making stages in human history—yet on a greater scale than ever before since the crisis is now a planetary one.

This year is the bicentennial of the birth of Frederick Engels (1820–95). In Engels’s honor, we intend to run a number of pieces this year celebrating his work. Here it should be remembered that Engels, with Marx, was part of the greatest intellectual and political partnership ever to emerge in the social sciences, in the foundation of historical materialism. Additionally, he was a major contributor to ecology, epidemiology, evolutionary theory, gender analysis, and dialectics (see Foster, The Return of Nature, chapters 5–7). To touch off the celebration of Engels’s birth, we are publishing in this issue an adaptation of the introduction to Paul Blackledge’s Friedrich Engels and Modern Social and Political Theory (Albany: State University of New York Press, 2019). As Foster states (on the back cover of the book), “Paul Blackledge’s new book has no equal as a contemporary assessment of Engels’s political thought. It provides a strong refutation of the ‘divergence thesis,’ whereby Engels is said to have systematically diverged from Marx’s analysis. Appearing on the 200th anniversary of Engels’s birth, it should be widely read.”

A little over a year ago, Monthly Review launched an online essay series called Monthly Review Essays as a permanent feature of the MR Online webpage, where we have published contributions by numerous distinguished authors, complementing and enhancing the analysis in the magazine. Contributions to Monthly Review Essays often consist of longer, more complex and specialized essays that for one reason or another do not fit within the format of Monthly Review itself, as a print magazine, but on which we place great importance. Some of the contributions so far have included István Mészáros’s “The Historic Anachronism and Necessary Supersession of the State,” Andy Merrifield’s “Marx in the Museum,” Lau Kin Chi and He Zhixiong’s, “Eight Years After: No End in Sight for Clearing the Fukushima Nuclear Disaster,” Andy Higginbottom’s “Global Britain’s Real Climate Changers,” Peter Critchley’s “Culturalism, Naturalism, and Social Metabolism,” Nathan Tankus, Rohan Grey, Scott Ferguson, and Raúl Carrillo’s “Modern Monetary Theory (MMT)—a Response to Henwood,” Thomas Adam’s “A Tale of Corruption by the United Auto Workers and the Big Three American Automakers,” and Lauren Smith’s “United States Imposed Economic Sanctions: The Big Heist.” Monthly Review Essays can be found at https://mronline.org/category/monthly-review-essays or in the top menu bar on the MR webpage.

In particular, we would like to draw attention to the new pamphlet by Howard Waitzkin, Rinky-Dink Revolution, now up on Monthly Review Essays. The pamphlet is a collaboration between Daraja Press, from which a print version is available, and Monthly Review Essays. Many thanks to Waitzkin and Firoze Manji for making this happen.

Staughton Lynd, who contributed frequently to Monthly Review in the 1950s and ’60s, and who wrote “Overcoming Racism” for the magazine’s February 2000 issue, turned 90 in November 2019. One of the most beloved figures of the U.S. left, Staughton has devoted his life to fighting for radical causes. Hence, we would like to offer these belated greetings from all at Monthly Review: Happy 90th, Staughton!

The esteemed radical economist Nina Shapiro, long associated with the Union for Radical Political Economics and author of “Keynes, Steindl, and the Critique of Austerity Economics” in the July–August 2012 issue of Monthly Review, died on March 6, 2020, at the age of 71. We encourage MR readers to explore this important article as well as her work more generally.

COVID-19 and Circuits of Capital
Culling the herd