Dear Reader, we make this and other articles available for free online to serve those unable to afford or access the print edition of Monthly Review. If you read the magazine online and can afford a print subscription, we hope you will consider purchasing one. Please visit the MR store for subscription options. Thank you very much. —Eds.
Review
by Lola Loustaunau
(Jan 01, 2021)
Topics: Immigration Inequality Labor Movements Places: Americas United States 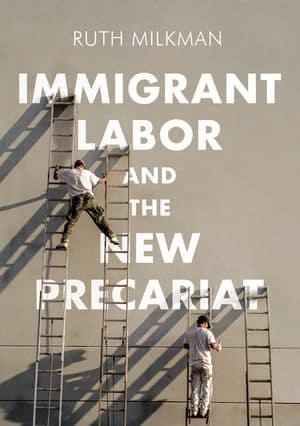 Immigrant Labor and the New Precariat by Ruth Milkman.

Lola Loustaunau is a doctoral candidate in the Department of Sociology at the University of Oregon. Her research focuses on migrant women in the food sector, emotions, and social reproduction. She is the coauthor of “Impossible Choices: How Workers Manage Unpredictable Scheduling Practices” (Labor Studies Journal, 2019).
Ruth Milkman, Immigrant Labor and the New Precariat (Cambridge: Polity Press, 2020), 200 pages, paperback, $22.95.

Ruth Milkman’s latest book is a strong scholarly response to the “immigrant threat” narrative that has been central to U.S. politics in the last decades. In Immigrant Labor and the New Precariat, the distinguished labor and migration scholar has a clear goal: to reframe the conversation about migration and increased inequality in the United States, reversing the causal relation that blames migration for the U.S. working class’s current perils. In a succinct but engaging fashion, Milkman shows how the flux of low-wage immigrants into the U.S. workforce in recent decades is “not the cause either of the massive economic restructuring that began in the 1970s or the accompanying growth of economic inequality and labor degradation,” but precisely a consequence of these developments (12).

In what many ways constitutes a tour de force, Milkman effectively mobilizes forty years of migration scholarship to address the main talking points of the growing nativism in U.S. politics, including the overall impact of migrant workers on working conditions and wages, whether migrant workers replace or displace local workforces, and migrant workers’ relation to organized labor and their supposed unorganizability. Milkman skillfully traces transformations in the U.S. economy during the late nineteenth century and the twentieth century alongside flows of migration, showing how the current rise in precarious work is better understood in the context of neoliberal reform, processes of deregulation, deindustrialization, and deunionization, as well as the growing inequality that has resulted. She shows how migrant workers are employed in sectors and occupations that have become degraded, such as residential construction and meatpacking, or that have expanded to fulfill the demands of changing demographics (an aging population) and the growing conspicuous consumption of the top 10 percent, such as beauty services and fine dining.

Certainly, none of these arguments are novel for those studying precarity or migrant workers, but Milkman’s goal is not to introduce a new argument or even offer new empirical data. Instead, she aims to craft a historically informed narrative about the role and impact of migrant workers that is both accessible and rigorous, and that can be used to change the public conversation about immigration. Agreeing that U.S.-born workers have a right to be angered about the degradation of their working and living conditions, she offers the book as a tool to redirect this anger toward “the employers that have degraded the jobs and the political system that has been increasingly subservient to business interests,” calling for the labor movement to be active leaders in countering the immigrant threat narrative (19).

However, it would be a mistake to think that the book is meant for the reactionary white lower-middle class that supports Donald Trump. In many ways, Milkman is speaking directly to those who, while allegedly in the progressive camp of U.S. politics, have turned their backs on the fight for immigrant rights. As she perfectly identifies, the biggest threat to any possibility of improving the working conditions for everyone in the United States is continuing to think that xenophobia and harsher restrictions on immigration will contribute to a more egalitarian society. Thus, she highlights how migrant workers have been at the forefront of struggles to improve working conditions in the past decades and shows concern for the labor movement’s absence in the fight for immigrant workers’ rights during Trump’s presidency.

To better the lives of all workers, Milkman argues, we must craft a new political alliance that reunites these fractions of the working class that have turned against each other. In the last pages of the book, she suggests we find inspiration in the experience of La France Insoumise and Chantal Mouffe’s “left-wing populism.”

Despite presenting the book’s urgency and task in political terms from the start, Milkman does not devote enough space to this discussion. This shortcoming, which does not take away from her ability to successfully craft an organizing tool for redirecting the political conversation in the United States, is in many ways symptomatic of a larger issue, namely the absence of a political project with a clear and progressive stance on immigration, not only in the United States but in Europe as well. The task of reimagining a political project that is able to rebuild the working class beyond the limits of the nation-state and create an emancipatory future remains pending, but, without a doubt, this book is a necessary starting point.

View all posts by Lola Loustaunau →

Standing with Standing Rock, Then and Now
A Portrait of Gil Green