Dear Reader, we make this and other articles available for free online to serve those unable to afford or access the print edition of Monthly Review. If you read the magazine online and can afford a print subscription, we hope you will consider purchasing one. Please visit the MR store for subscription options. Thank you very much. —Eds.
Notes from the Editors
by The Editors
(Jan 01, 2021)
Topics: Marxism Political Economy Places: Americas Global United States 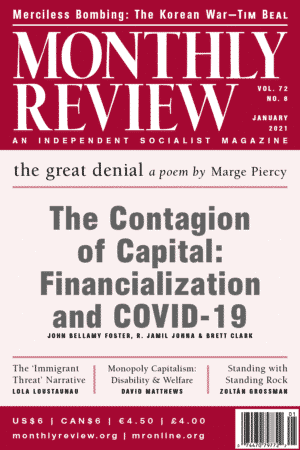 We are extremely pleased to announce that John Bellamy Foster, editor of Monthly Review, has won the prestigious Deutscher Memorial Prize for 2020 for his The Return of Nature: Socialism and Ecology (Monthly Review Press, 2020). This book is the continuation and culmination of decades of research devoted to identifying, assessing, and developing the ecological analysis found within the work of Karl Marx and exploring how this open, dialectical, materialist approach informed and was integrated into scientific analyses and social critiques that followed. It impressively builds on and extends the historical analysis that was forged in Foster’s Marx’s Ecology (Monthly Review Press, 2000). At the start of the twenty-first century, Foster and Paul Burkett, who wrote Marx and Nature (1999), established an important foundation for ecological Marxism, detailing how Marx’s materialist conception of history was inseparably bounded to his materialist conception of nature. They demonstrated how Marx’s political-economic critique and ecological critique of capitalism are unified. This work has transformed how Marx and Frederick Engels are understood, as ecological relations and concerns are part and parcel of any discussions of value analysis, accumulation, labor, alienation, history, human needs, and socialism. Foster brought to the fore Marx’s metabolic analysis, which entails an examination of the material exchange between human society and nature, and how capitalism, given its relentless drive to accumulate, produces ecological rifts as it transgresses against natural limits and the workings of ecosystems.

Monthly Review has been at the center of these developments, contributing to the burgeoning of ecological Marxism, deepening and expanding Marx’s ecological analyses, and extending metabolic analysis. Kohei Saito, author of Karl Marx’s Ecosocialism: Capital, Nature, and the Unfinished Critique of Political Economy (Monthly Review Press, 2017) and recipient of the Deutscher Memorial Prize for 2018, details how Marx was constantly engaging and integrating cutting-edge knowledge from natural scientists into a comprehensive critique of political economy, which highlighted how the ecological crisis is embedded in the very logic of capitalism. In Monthly Review, Foster has presented Marx’s triadic scheme of the universal metabolism of nature, the social metabolism, and the metabolic rift, further illustrating the emergent dialectical relation between human society and nature. The work of István Mészáros, a long-time MR and Monthly Review Press author and winner of the Deutscher Memorial Prize for 1970, has been particularly important, especially his discussion in Beyond Capital (1995; Monthly Review Press, 2000), where he describes how capitalism creates a distinct social metabolic order and an alienated mediation between humans and nature. Ecological Marxists incorporated these points, describing how commodity production imposes an alienated social metabolism, which results in metabolic rifts, given capital’s relentless quest to expand accumulation.

In The Political Economy of Global Warming, Del Weston proposes that the “metabolic rift is at the crux of Marx’s ecological critique of capitalism, denoting the disjuncture between social systems and the rest of nature” (Routledge, 2014, 66). Following Foster’s foundational publications on this front, such scholarship has greatly proliferated—see the selected bibliography on the Monthly Review website. Numerous MR authors in particular have contributed to its development and application, including: Ian Angus, Daniel Auerbach, Brett Clark, Rebecca Clausen, Peter Dickens, Michael Friedman, Hannah Holleman, Stefano Longo, Fred Magdoff, Brian Napoletano, Victor Wallis, Chris Williams, and Richard York. This research has involved examining how the social metabolism of capitalism has contributed to ecological rifts in climate, forest, hydraulic, oceanic, and soil nutrient systems. The Ecological Rift (Monthly Review Press, 2010) by Foster, Clark, and York connects ecological imperialism to the global metabolic rift, as millions of tons of guano, extracted by Chinese laborers as de facto slaves, were shipped to Europe to replenish the exhausted agricultural lands. It also details how capitalism generates a rift in the carbon cycle via the constant burning of fossil fuels, the degradation of carbon sinks, and the flooding of the atmosphere with greenhouse gas emissions. Andreas Malm, the winner of the Deutscher Memorial Prize for 2016 for his Fossil Capital (2015), provides an extensive historical-materialist analysis of the rise of steam power and how the burning of fossil fuels has come to reside at the heart of capital. Integrating metabolic and value analysis in The Tragedy of the Commodity (2015), Longo, Clausen, and Clark demonstrate how capitalist commodification resides at the center of the collapse of global fisheries, where fish are being harvested at a faster rate than they can reproduce. Holleman, in Dust Bowls of Empire (2018), examines how white settler colonialism, racial capitalism, and capitalist agricultural development produced the dust bowls that devastated the United States in the 1930s, and how these forces persist in generating ecological degradation. The July–August 2018 special issue of Monthly Review was devoted to exploring the ongoing evolution of metabolic analysis, such as Friedman’s exploration of how social and ecological disruptions can manifest in the human microbiome.

The historical-materialist approach within ecological Marxism has been especially fruitful, as the realms of inquiry continue to expand, offering a more comprehensive understanding of Marx’s ecology, the critique of capital, and the ecological contradictions. Foster and Burkett, in Marx and the Earth (2016), offer an in-depth analysis of the debates regarding energy and thermodynamics, focusing on Marx and Engels’s assessments of these issues. Through this engagement, Foster and Burkett reveal the sophistication of Marx and Engels’s open, dialectical understandings of nature. Through this work, they also tackle such important issues as intrinsic value and aesthetics. In Marxism and Ecological Economics (2006), Burkett offers a systematic analysis of ecological economics, illuminating how integration of Marxist political economy would greatly enrich the field, positioning it to address the most pressing environmental problems.

This tradition of work continues to evolve, especially through more explicit engagement with other critical realms of Marxist research, which have long been central to Monthly Review. For example, ecological Marxism is benefiting from foundational scholarship focused on racial capitalism, settler colonialism, and social reproduction, including, but in no way limited to, Tithi Bhattacharya, Glen Sean Coulthard, Oliver Cromwell Cox, W. E. B. Du Bois, Roxanne Dunbar-Ortiz, Nick Estes, Silvia Federici, Susan Ferguson, Nancy Fraser, David McNally, Ariel Salleh, and Lise Vogel. This work is deepening the analysis focused on the expropriation of nature and humans, while emphasizing the interlocking forms of oppression and inequalities that have been figurative in the historical emergence and ongoing development of capitalism. Such developments are evident in articles published in Monthly Review over the last several years and in Foster and Clark’s The Robbery of Nature (Monthly Review Press, 2020). Rob Wallace’s Big Farms Make Big Flu (Monthly Review Press, 2016) and Dead Epidemiologists (Monthly Review Press, 2020) represent crucial developments in ecological Marxism, presenting how capitalist agriculture is destroying ecosystems and decimating wildlife in ways that are facilitating the spread of diseases from other animals to humans, which manifest in novel viruses and contributed to the COVID pandemic.

Alongside the mounting planetary crisis, this tradition of ecological Marxism has demonstrated how capitalism is antithetical to sustainability. At the same time, it has focused on the need for a long ecological and social revolution, in which substantive equality, meaningful work, human needs, and metabolic restoration are the foundation for a new society, represented by the advance of socialism. Monthly Review Press books, such as Angus’s Facing the Anthropocene (2015), Magdoff and Williams’s Creating an Ecological Society (2017), and Magdoff and Foster’s What Every Environmentalist Needs to Know About Capitalism (2011), explicitly address these critical issues.

Foster’s The Return of Nature carries forward this tradition, offering a rich historical analysis of how Marx’s open, dialectical, materialist ecological approach continued to develop throughout the nineteenth and twentieth centuries. Through an in-depth engagement with J. D. Bernal, Rachel Carson, Christopher Caudwell, Barry Commoner, Engels, J. B. S. Haldane, Lancelot Hogben, Florence Kelley, E. Ray Lankester, Hyman Levy, William Morris, Joseph Needham, Arthur Tansley, E. P. Thompson, among many others, Foster brings forward the major debates and struggles that influenced ecological science and socialist critique. What emerges is how central socialism has been to the development of ecology. Here, there is a celebration of the growth and expansion of ecological Marxism, highlighting its deep material roots. We extend a hearty congratulations to John Bellamy Foster as he receives the Deutscher Memorial Prize, and thanks to everyone who has contributed to forging ecological Marxism and who struggles for ecological revolution.

For information regarding the Deutscher Memorial Prize, see deutscherprize.org.uk. For more information on The Return of Nature and other Monthly Review Press books, see the press section on our website monthlyreview.org.

We are pleased to announce the publication of Crisis and Predation: India, COVID-19, and Global Finance by the Research Unit for Political Economy. Given the importance of the book and the immediacy of the issues it addresses, we are providing it as a free e-book. Visit monthlyreview.org/product/crisis-and-predation. Paperback editions can also be purchased at the same web address. We are eager to put this analysis in the hands of people all over the world.

The Contagion of Capital
On Creative Destruction, Myths, and Revolution